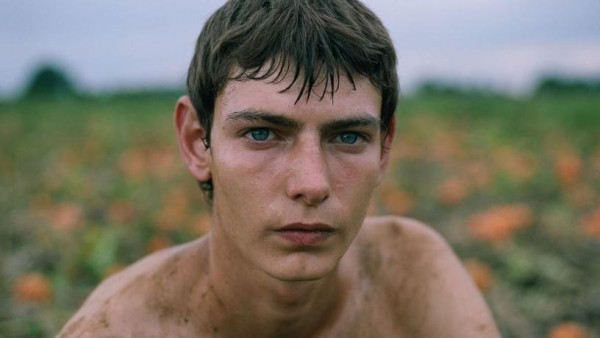 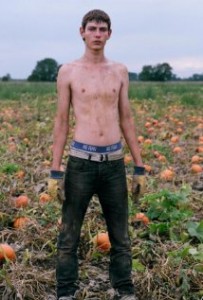 Inarticulacy or more accurately what is left unsaid is a defining behavioural tic of the characters in Guy Myhill’s Norfolk-set film, The Goob. It has been described as a ‘coming of age’ drama, except that I don’t think the title character, a sixteen year old referred to by his nickname, the Goob (Liam Walpole) really comes of age. More accurately, he comes up against a wall, namely his young mother’s brute of a boyfriend, Gene (Sean Harris at his most menacing).

There is not a lot of violence in the film, but the threat of it is constant. Goob returns home at the end of a school term to discover that the man he thought of as his dad, Levi (Paul Popplewell) has broken up with his mum, Janet (Sienna Guillory). On the surface, Gene has a lot going for him. He has land, grows pumpkins and is a winning stock car driver. But with ability comes a voracious sexual appetite. It is clear early on that he cheats of Janet and when Goob falls for Eva (Marama Corlett), a young picker, Gene wants to go for her too. Whilst the pickers are out working, he sits in the van masturbating.

Gene essentially treats Goob as a slave, forcing him to dig a hole and live in it, to keep watch on his crops. Gene has a reason to be aggrieved. Goob and his brother stole Gene’s car and crashed it. The brother sustained severe injuries. The intent is clear: the boys despise Gene for being praised as ‘championi’ by Janet. More particularly, they hate his assumed sense of entitlement.

One of the statements left unsaid is that Goob cannot challenge Gene physically. Goob prefers instead the gentler company of Levi. When Levi takes Goob to the races, Gene spots them, tells Goob to go home and Levi to get lost, dismissing him as ‘pikey’. ‘Your ex nearly got beat up,’ Gene tells Janet, as if his own violence was somehow outside of himself.

Mary does succeed in getting another boy to help Gene, but Elliott (Oliver Kennedy) is gay and it is only a matter of time before he earns Gene’s ire. This doesn’t happen during a euphoric dance sequence in which Elliott, Goob and a girl prance to the tune of Donna Summer’s ‘I Feel Love’, rather when Elliott pinches a red dress from the washing line and puts it on. Gene takes Elliott to the woods and humiliates him. Elliott phones Goob for help, who sees him off at the bus. ‘I’m not missing you yet, Goob,’ are his parting words.

The expectation of violence and never knowing quite what Gene has in mind, except when he seeks out Eva, is what keeps us watching. At its heart is the bond between Goob and his mother, who at one point gives him a longing hug. ‘You’ll want this at 26, 36, 46 – you’ll always be my boy,’ she tells him, the inference is that, at some point, she expects him somehow to make her life right.

Writer-director Guy Myhill has been compared with Duane Hopkins, whose debut feature Better Things was similarly sparse in dialogue and lyrical in mise-en-scene – one shot in The Goob features the shadow of a wind turbine falling on grass. Myhill’s debut feature has a clearer narrative drive but the same sense of paralysis felt by its main character. You can’t choose your parents, or even, it seems your step parents. But you can’t just walk away either. As in the best drama, Myhill presents a problem that cannot easily be solved and invites the audience to empathise.