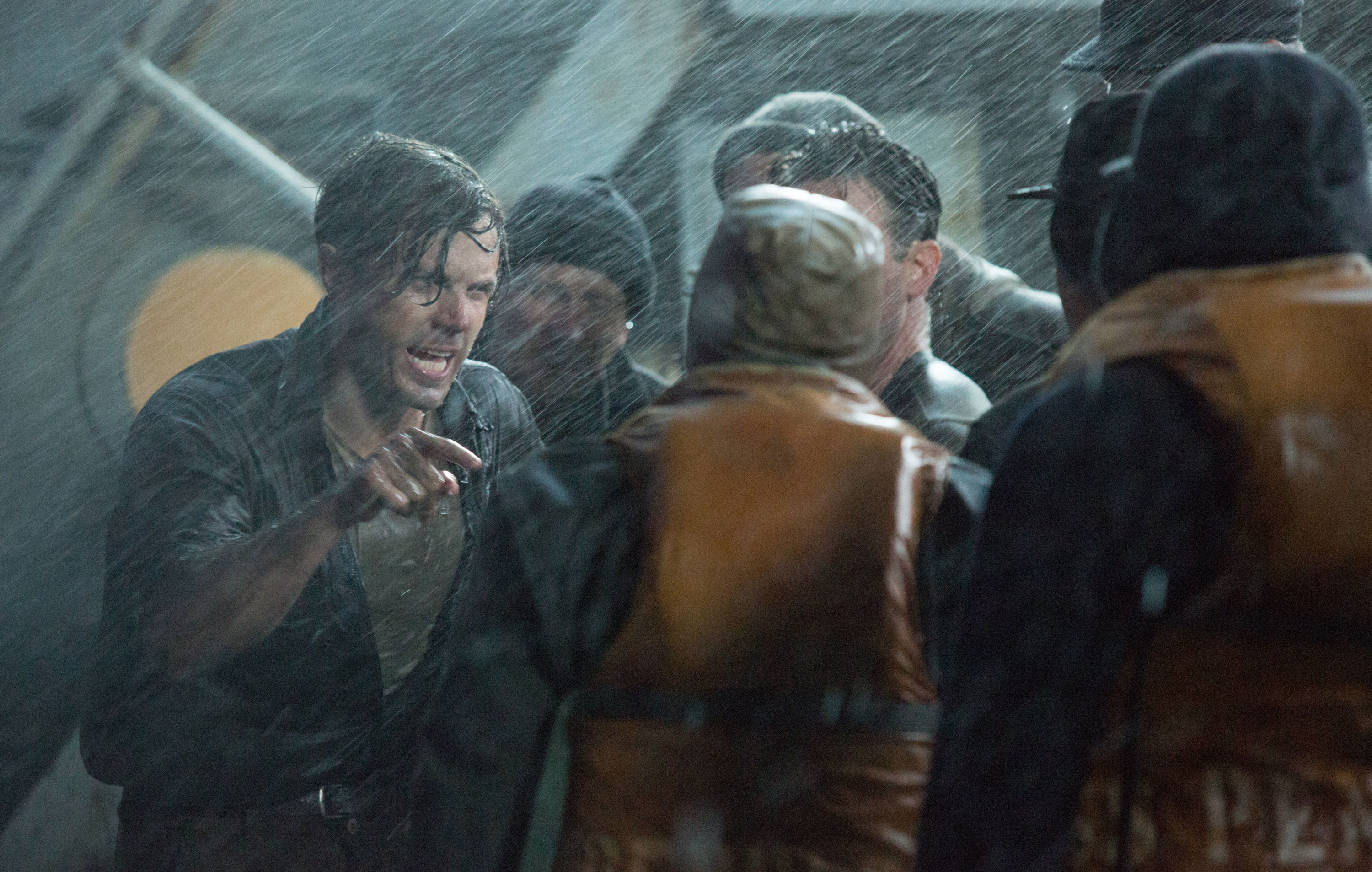 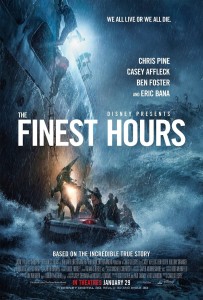 Watching The Finest Hours is like going to a restaurant you know and trust and despite being satisfied when you leave, feeling as if there was definitely something lacking. The contents are all inviting and have an undeniably charming quality to them, but upon consumption you simply aren’t as full as you’d hoped given the dish wasn’t as rich as it had the potential to be. The Finest Hours is a handsome film, directed by Craig Gillespie (Million Dollar Arm, Fright Night, Lars and the Real Girl), and features both impeccable costume design and an earnest soundtrack not to mention a story that is genuinely thrilling. Pair these strong qualities with an all-around impressive roster of cast members not only in the key roles, but in supporting and minor parts throughout and it’s nothing short of a guarantee that the film wasn’t going to at least be a rather solid venture. And it is. In fact, that’s exactly what The Finest Hours turns out to be with there not necessarily being any issues other than the fact it doesn’t feel like an exception in the long line of cinematic adventures we’re given throughout the year despite the story being one of an exceptional heroic act. For this reason, the movie adaptation of the story and of Casey Sherman and Michael J. Tougias’ novel feels as if it is something of a missed opportunity in representing a story that could have really produced a great or even “exceptional”, piece of fiction. Instead, The Finest Hours gives audiences what we expect in that it is consistently engaging, naturally tense in moments, and hits just the right amount of emotional beats to make the harrowing rescue mission all the more affecting in the end. It is in this emotional connection though, that the film doesn’t connect as often as it should. Even without the love angle from which the film comes at the story there should be more than a handful of emotionally charged moments given both men at the head of these dueling narratives are staring death in the face. And yet, we never feel as emotionally invested in the proceedings as the characters clearly are. There is a disconnect and while it doesn’t destroy the film, it certainly keeps it from realizing its full potential.

We begin in 1951 in Wellfleet, Massachusetts as Bernie Webber (Chris Pine) is set to embark on a blind date with Miriam (Holliday Grainger), a girl who he’s only spoke with on the phone up until this night. Bernie is a member of the Coast Guard and given Miriam has requested to make it a double date he takes along another of his Coast Guard pals in Gouthro (Beau Knapp). Given the wonder Bernie seems to already have for Miriam it isn’t difficult to guess that once they do finally meet, things go well. A year or so passes and things are naturally getting more serious between the couple. Bernie, being the shy, timid man that he is simply feels lucky to have as beautiful a woman as Miriam in his life, but he is concerned about taking things too far as they are set to experience one of the worst storms to ever hit the East Coast that winter and given he doesn’t know what his job might inevitably require of him, he’s afraid to take the next step. It is at this moment we cut to an oil tanker off the coast of Cape Cod that is in the midst of battling this unheralded winter storm when their ship is literally ripped in half. As the man who knows the most about the ship, Ray Sybert (Casey Affleck), is somewhat by default put in charge of figuring how to keep their half of the ship afloat long enough for rescue boats to find them or until they can make it to shore. Sybert is surrounded both by supporters (John Ortiz, Graham McTavish, Josh Stewart) and detractors (Michael Raymond James) making each and every decision that much more stressful. It is after a citizen of Wellfleet, Carl Nickerson (Matthew Maher), notices the tanker from the shore that Webber’s commanding officer, Daniel Cluff (Eric Bana), sends him and a crew of three other men including Richard Livesay (Ben Foster), Andy Fitzgerald (Kyle Gallner), and Navy man Ervin Maske (John Magaro) into the frigid temperatures and 70-foot high waves on a small lifeboat to rescue the more than thirty stranded sailors trapped aboard the rapidly-sinking vessel.

Naturally, the most appealing aspect of this story is the heroism and bravery involved in completing such a task, but seeing as all Webber and his crew of men are doing is figuring out how to drive through waves or get over them there is only so much Gillespie can do seeing as the characters don’t discuss how they intend to go about doing what is said to be the impossible. Even more disappointing than this concerning the narrative led by Pine’s Webber is that much of their time on screen is clearly spent in front of a green one with the CGI being more visible to the average audience member than it should. Sure, there is constant rain coming down on these guys and Pine, Foster, Gallner, and Magaro clearly were drenched over and over to simulate the unrelenting conditions of this environment as best they could, but given the look and feel of these segments and that they take up the majority of the center of the film, it seems an alternative route would have made the environment feel more authentic and thus the characters in more peril. Even as Bernie jets ahead, spearing these gigantic waves with their small lifeboat, there is never as much a sense of danger with Bernie and his crew as there is with Affleck’s portions given their environment is ten times more veritable. What saves these portions from being completely absent of story propulsion (and not just literal forward movement) is the character arc of Bernie and how he grows to be this commanding presence that is self-assured and validated through this experience. While most know Pine for playing the cocky, surefire Captain Kirk he pulls off the more apprehensive and quiet man that Bernie is while still imbuing his natural charm into the character. I found it interesting that the story would open with the beginnings of this relationship Bernie would share with Miriam, but it immediately shows us how Bernie comes to realize someone is depending on him. This is critical for his development over the course of the film. Beginning by highlighting this relationship also sets up the emotional core of the film, but as I said earlier this aspect is something of a disappointment given Grainger clearly has a character who is worth getting to know and the movie seems to want to do more with Miriam than it ends up doing.

Where the film succeeds in being the rousing rescue/adventure story that it has been billed to be is in the scenes on the battered tanker as Sybert and his crew have to put their inhibitions and attitudes aside and figure out how to keep on living despite a ticking clock that could jump to zero at any second. Whereas Bernie sees himself as lucky for landing a girl as beautiful and kind as Miriam, or for guiding him through the treacherous waters, Sybert doesn’t. Sybert is a single man with no family and no seeming purpose in life other than to understand his boat. He is a man who makes his own luck and believes that if he is to get off this ship alive that he is going to have to use his learned skills and intuition to do so. He will rely on nothing else, the least of all luck. In what could have easily been a brooding and bleak performance, Affleck instead turns Sybert into a man of great vigor and valor. It’s clear Sybert has no desire to be in charge and that he would rather keep to himself in the engine room, guiding the boat to where it needs to go and keeping his ducks in a row. When the time calls for it though, he steps up and puts to rest the conflicting ideologies going back and forth on the deck between the rest of the crew and states flat-out what is going to happen. In not looking for recognition or reward, Affleck’s performance is one of honesty and thus we find him more worth investing and believing in even if the odds Bernie has to overcome are greater. The double narrative does give the film a nice pace though fifteen minutes or so could have been trimmed or rather certain scenes been staged more dramatically so as to earn the type of applause and payoff one only hopes such a story will have. Like its issues with the character of Miriam though, The Finest Hours seems to have an ambition it doesn’t know how to achieve. Everything about the film is perfectly acceptable and I doubt I’ll ever hear anyone say this is a bad movie, but there is most definitely something lacking. Maybe it’s the horrible Southern accent Bana (an Australian) attempts or maybe it’s the repetitive nature of Bernie’s plight that bring the film down from what it could have been, but more than this the film simply doesn’t have enough innovation in its DNA or as much determination as its characters to rise above and stand out from the crowd.

You can also now check out my new film review show called INITIAL REACTION. Look for a new episode each week. Here is our review of The Finest Hours: