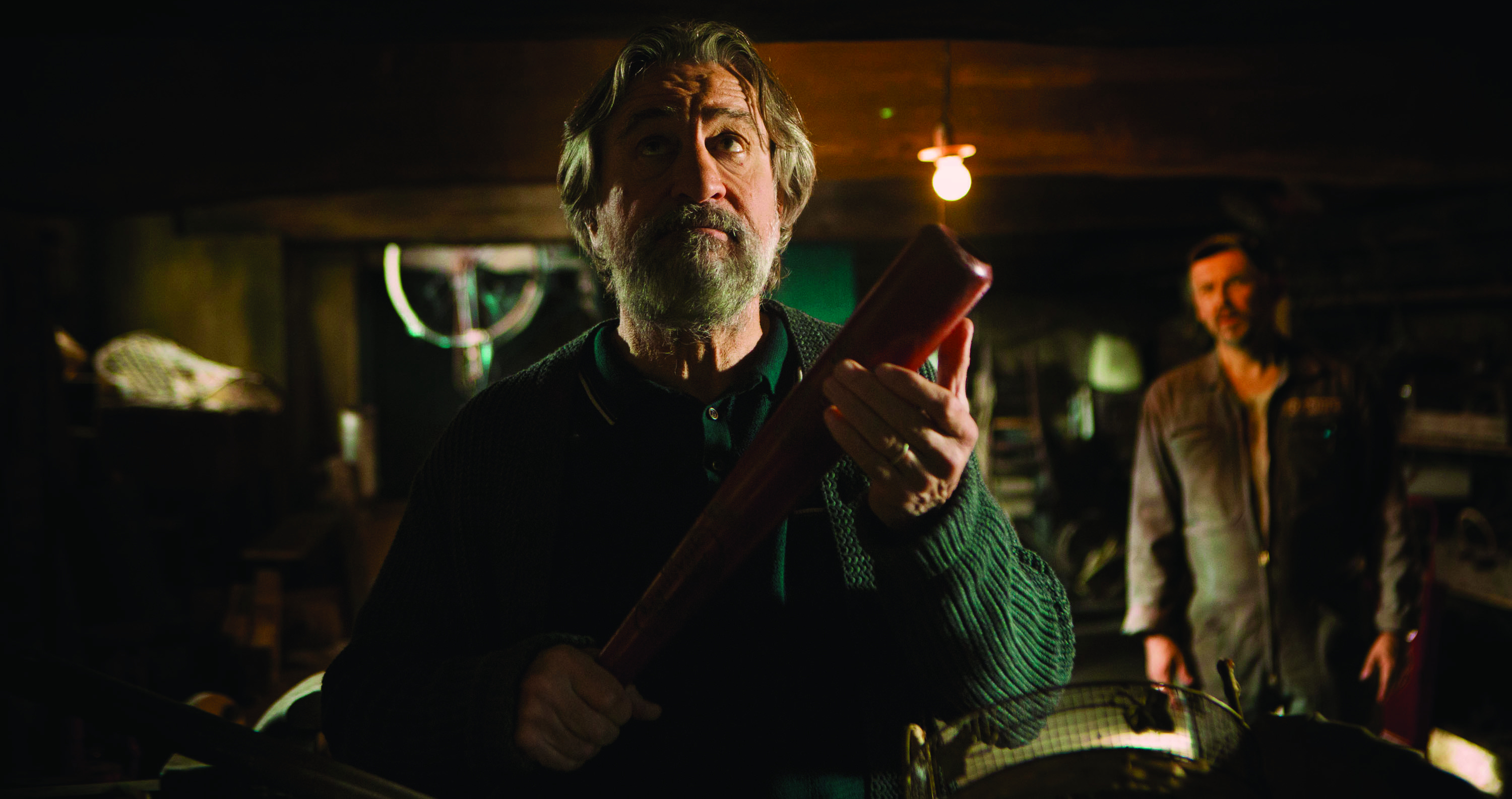 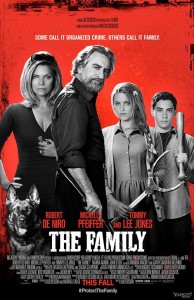 There is something oddly sweet to a black comedy like The Family. Even though labeling it as a “comedy” doesn’t feel right though as this is clearly just trying to be what it is and nothing more. In many ways this is a movie that is very much in love with itself and the genre it so desires to be a part of. It is a love letter from writer/director Luc Besson (The Fifth Element) who seems to have always wanted to make an American gangster film, but could never find the twist he would like to put on his own story until now. As this is executive produced by Martin Scorsese and stars a myriad of familiar faces in the mob genre you can see how Besson might have accomplished his goal. On the other hand it is with extreme caution we approach an off hand Robert DeNiro comedy these days as he’s appeared in countless studio projects over the past few years that have looked to be little more than nice paydays. This ultimately seemed to be the most offensive though, not only because he was tarnishing his legacy by starring in another forgettable movie that would no doubt be seen by few people, but because he was now tarnishing the legacy with a rip off of the kind of movies that gave him said legacy. Fortunately, this is not the case for as much as The Family is in love with itself it is also a sincere tribute to mob movies and the way they function. It places DeNiro at the head of the table because it wants you to be reminded of James Conway and Sam “Ace” Rothstein and has Michelle Pfeiffer at his side because of 1988’s Married to the Mob and even Scarface. These are not perfect examples of type casting in the casual sense, but they are intentional casting because they are both recognizable to general movie audiences and function as a nice nod to past work as well as a nice inside joke for cinephiles. I wouldn’t say all of this without the confirmation of a single scene that takes place in the latter half of the film that is brilliantly executed and downright hilarious to watch unfold. I won’t give any more away than that, but will say it’s worth the price of admission alone though I doubt you’d be disappointed in the rest of the movie either because it’s actually pretty damn fun.

Based on a book by Tonino Benacquista the film follows a mob family, who we come to know as the Blake’s but are actually the Manzoni’s, that have been placed in the witness protection program after good old dad (DeNiro) snitched on his fellow mob mates. The family is moved around fairly often it seems for as much as DeNiro’s Fred tries to leave the ways of the mob behind, he simply can’t break habit. His wife, Maggie (Pfeiffer), is a solid support though it is easy to see she is getting tired of relocating because of her husbands antics and thus has resulted in her putting a rather short leash on him. We are introduced to the newly minted Blake family as they arrive in a small town in Normandy. The two children, Belle (Glee‘s Dianna Argon) and Warren (newcomer John D’Leo) seem to have inherited a few tricks of the trade from their old man and even momma Maggie can’t help herself when certain natives pick on her supposed homeland. While the film is as much about the family acclimating themselves to their new surroundings all while being on strict watch from the FBI as represented by Tommy Lee Jones’ Agent Stansfield (another nod to intentional type casting) there is naturally a threat on the horizon as well. Given that the family is in the witness protection program and are being moved for their own sake it is safe to assume there is someone after them and that would be correct as it comes in the form of an old mob boss that is now living it up in jail and intends to kill Fred and his family as leverage for the reason he is now in the big house. Throwing in the revenge element seems a classic Besson fall back, but it works here as it not only gives the film something to build to and resolve to some degree but it also brings a pacing to the film that allows it to fly by and a fair amount of tension that without it would make this a complete comedy and therefore lose some of its edge and come off as more of a parody of the genre rather than the tribute it is so clearly intended to be.

Being honest though, I thought all of that sounded rather run-of-the-mill and typical for a movie of this type. Thus is the reason I wasn’t overly-excited to see the film and held expectations that were generally lower than when DeNiro places himself with a script he might have actually read. What is kind of miraculous about the film though is that all of the typical beats of the film, as described above, still happen but the film comes out the other end unscathed because of the relationships between the characters. Whether it be the relationship between Fred and Maggie (playful and understated), Maggie and the two FBI cronies that keep watch next door (Jimmy Palumbo and Domenick Lombardozzi), Fred and Stansfield (DeNiro and Jones share some great back and forth with Jones perfectly placed straight man), but most impressive is the oneset-up from the beginning between Belle and Warren. I expected, for no reason other than watching countless movies has led me to assume this way, that the two siblings would either be at odds with one another or for one of them to not embrace the lifestyle with which their father had raised them, but in fact Besson and his writing partner Michael Caleo proved both those assumptions wrong. They do this by giving the brother and sister a loving relationship that is supportive while also allowing them individual identities that have them feeling out their new school and playing with their fellow students as if it were their own little New York City mob arena. D’Leo is especially engaging as he weasels his way in and out of trouble by applying what he’s always heard his father talk about to the high school social dynamic. On the other hand it is simply refreshing to see a young woman on screen who pays attention to her little brother, has a genuine bond with her family, cares about them yet is more than able to handle herself on her own. The dialogue between Belle and Warren is fast-paced and short-handed so we easily buy into their relationship and it becomes a highlight of the films many well-developed characters that interact with real authenticity and most of the time to great effect for what tone that particular scene is going for. Speaking of tone, this is the one area where I had a few issues with The Family, but not because it has any kind of identity crisis but rather because it doesn’t handle the shifts from comedic or even darker humor to brutal violence as best as it probably could have.

One must keep in mind that Besson is a French filmmaker and that he has a particular brand of humor that shines through in spades here but is also paired with pretty rough violence that could shock you if you go in expecting a full-fledged comedy. The opening sequence will have you re-think that assumption immediately, but throughout the rest of the film we sway back and forth between what are not necessarily meant to be laugh out loud moments, but more slight chuckles and gruesome yet comically-tinged takes on how the mob operates when questioning or torturing a subject. That therein lies much of the intended comedy is fine as they are clearly riffing on the extremes people in that line of work resort to over the simplest of things, but when you start taking out innocent bystanders that have no affect on the overall goal, but have been introduced to the audience as wholesome neighbors and peers you genuinely feel bad for the loss of life and the grief such loss would actually cause were it happen to real people. Lucky for us, this kind of moral dilemma doesn’t become that until the third act of the film and then the movie resolves itself so quickly and ends abruptly you almost feel as if the makers didn’t want to spoil their fast-paced, intelligently made first three-fourths of a film by resorting to the big shoot-out in which we likely know who will live and who will die. This again comes back around to the biggest issue with the film having a rather familiar setup that is only upended and made more fun by the witty take on the genre and the perfectly cast performers who bring these characters to charming life. DeNiro is doing his best here and seems to be having a good time with the role as he is more reflecting on his career and persona than anything else, but he does get a great through-line joke concerning his favorite expletive. Pfeiffer is especially terrific as she shares an ease with her co-star that shows she understands all of his shortcomings but loves him anyway and would stick by his side no matter what. As for Jones, I forgot he was in the movie until his character showed up for the first time and he delivers exactly what and how you’d expect him to, but the good news is you’ll have a lot more fun watching this than he seemingly did making it, so you know that has to be a good sign.

Blue is the Warmest Color