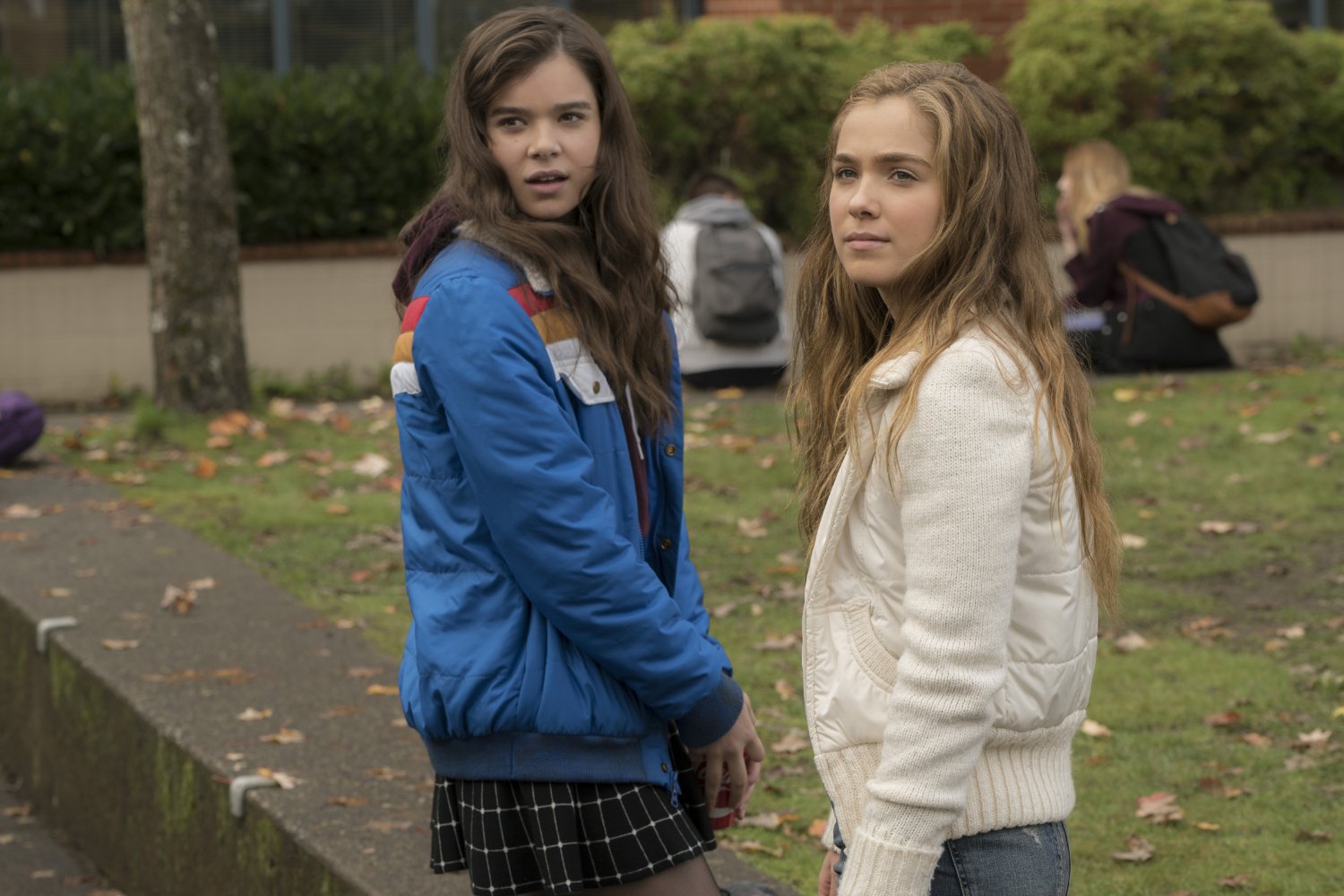 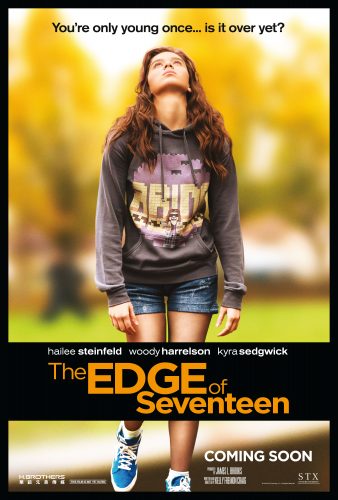 We all lead complicated lives. This is the simple lesson Nadine (Hailee Steinfeld) takes away from her experiences as documented in the directorial debut from Kelly Fremon Craig who also has the sole credit on the screenplay for The Edge of Seventeen. We all lead complicated lives and unfortunately, having problems isn’t what makes Nadine special despite the fact she thinks it does. Given Nadine is a junior in high school who has little to no social life outside of her best friend Krista (Haley Lu Richardson), who doesn’t get along with her mother, and who is the younger sister of all-star older brother Darian (Everybody Wants Some!!‘s Blake Jenner) there seems valid reason for her amount of self-loathing. Of course, the main idea in Edge of Seventeen is for Nadine to come to the realization her problems aren’t singular to her life, but that there are in fact always those who have it worse. That type of hackneyed advice isn’t what teenagers want to hear though, and Edge of Seventeen isn’t here to serve as a lecture for those who can associate with its protagonist. Moreover, Craig’s film feels very much like a personal essay or even more, a love letter to her own formative years that, despite feeling like hell in the moment, she couldn’t be more thankful for now. This is a difficult task. Capturing the essence of what you were feeling throughout a certain time in your life without spelling it out in the dialogue is one thing when writing the screenplay, but when actually attempting to do so through execution of that written word it becomes clear how critical tone is and if the tone isn’t right, the themes and ideas won’t translate and you end up with a final product as foreign a feeling as popularity is to Nadine. To say that Craig excels in overcoming these obstacles would no doubt make the writer/director chuckle as she likely questioned herself and her abilities on a daily basis, but what has come out of what I have to believe was a slew or re-writes and re-calculations to make sure that not only was the essence of her youth captured, but also a character arc that rings true for a number of us is a high school movie for the ages, a close relative to those John Hughes movies that captured all the angst and innocence of adolescence, but with the natural edge of the current culture.

And so, we begin by meeting Nadine at a very young age where she already exudes each of the aforementioned qualities that tell us how much she despises her brother, how much she resents her mother, and how determined she is to make the people’s lives around her as difficult as she feels hers is. This is mostly done through some razor sharp dialogue that Nadine throws out in the form of insults and/or condescending observations. While we catch the drift Nadine is a rather harmless individual only lashing out because of a traumatizing incident that took place a few years prior involving one of the few people in the world Nadine felt understood her-her father. Even before this event though, Nadine had already met Krista and had formed an indestructible bond with her. This relationship likely being the only thing that allowed Nadine through such a tough time, but as the two are now well into their high school years with Nadine having grown up to look like Steinfeld and Krista having matured into Richardson (who was one of the only redeeming qualities in the Melissa Rauch “comedy” The Bronze earlier this year) things are certainly not as bad as they could be. It is on a weekend where Nadine’s mother (Kyra Sedgwick) goes away on a date with a doctor she met on an online dating site that Nadine and Krista lay claim to the house, but Darian of course can’t resist having a few friends over as well. Things escalate when Nadine drinks too much, gets sick, and passes out early leaving Krista and Darian to get to know one other a little better. It is this catalyst precipitated by Darian that leads Nadine into an even bigger downward spiral than she typically tends to be in. Darian, who already had the world in the palm of his hand, takes away the only thing, the only person that made Nadine feel better about herself. This stinging realization hits Nadine when Krista delivers the line, “He invited me to a party on Friday and I want you to come with us.” That “us” used to be them and now even Darian has that on her. We naturally feel empathy for Nadine under the given circumstances and it is through this trying experience Nadine comes to understand the whole world is more complicated than she thought, not just hers.

This is a movie about the simple trials and tribulations of trying to obtain a level of comfortability in what is the unforgiving environment of high school. Nadine and the personality she possesses is not conducive to achieving such likability as, outside of Krista, Nadine spends most of her time at school hanging out in Mr. Bruner’s (Woody Harrelson) classroom. As previously mentioned, Craig’s dialogue, especially for Nadine, is excellently pointed with the rapport between Steinfeld and Harrelson being a real highlight. As the detached teacher Harrelson is indifferent to anything Nadine might throw at him as he’s heard it all before-the same cycles of awkward and excluded kids hoping for more, looking for attention with Bruner responding by letting them know they won’t be getting any such reactions or care from him. That Steinfeld’s Nadine is able to keep up with the apathetic Bruner allows the teacher to give her a slight edge of credit over those who have come before her. It says a lot though, that this type of relationship is the kind Nadine seeks refuge in when her reliance on Krista falters. There is also the facet of Nadine obsessing over a senior boy named Nick (Alexander Calvert) while being the focus of affection from Erwin (Hayden Szeto) a quiet, but charismatic young man that doesn’t fit the mold of what Nadine always imagined she’d want out of a boyfriend. What separates The Edge of Seventeen from being just another account of that classic scenario where the protagonist doesn’t see that what they need is right in front of them the whole time rather than in the fantastical idea built around the upper classman crush is that the film actually tackles the process of Nadine discovering how ideas and realities are indeed two very different things rather than just having someone tell her as much. The Edge of Seventeen is notable for giving its main character the chance to learn these types of life lessons rather than just utilizing her as a pawn to teach them to the audience. Through the dynamic Craig builds between her ensemble cast she is able to convey by displaying that despite a desire, everything passes and what one doesn’t form grand ideas around will typically come to pass as the most pleasant and the most surprising. Cue the adorable chemistry of Nadine and Erwin which is tracked effectively by Craig’s script and her two actors as both elements culminate to convey an arc we not only want to see play out, but are genuinely invested in.

As Nadine, Steinfeld is fantastic at relaying this misunderstood and fragile mentality that is more or less constantly searching for evidence that she is not just completely off-putting. Sure, Nadine is mostly self-involved and ornery more times than not, but such attributes are inherent to this stage of life and we feel a deep sympathy for her due to the fact her only support systems seem to consistently be ripped out from under her. It is through Steinfeld’s rather fearless performance that we come to know Nadine as a human being and forgive all of her shortcomings if not embrace them due to the fact we undoubtedly share or have shared most of them at some point in our lifetime. It is through the relationships Nadine forms that we are told more about her and who she actually is rather than buying into the self-deprecating and depressive funks she tends to parlay when in the company of those she assumes have it easier than her. One of the more striking instances of this is that of the relationship between Nadine and her mother, Mona. The two are set-up early as opposites who have butted heads since Nadine’s pre-pubescent years and this strained relationship only becomes more so after the passing of Nadine’s father and Mona’s husband. He was the glue holding them together, holding them in a state of peace, and without him there is little hope of these two even attempting to try and understand where the other might be coming from. Nadine will threaten her mother with the likes of, “I’ll tell everyone on Facebook you pluck your nipples!” while Mona will give such sage advice as telling herself that everyone else in the world is as lonely and pitiful as she is they’re just better at hiding it. It doesn’t bode well that this is the kind of encouragement a mother is giving her daughter, but we understand the bigger picture. Through these characters shortcomings we come to recognize our own-recognize that perspective is more than just a point of view, but a context from which all our future ideas and views are influenced. The Edge of Seventeen, especially through Nadine’s relationships with Mona, Darian, and Mr. Bruner executes this point to such great effect that it’s almost lost on viewers how frequently funny and downright entertaining the movie is. In a sense it plays as an effortless encapsulation of some very personal plights that was undoubtedly anything but. Craig deserves more attention than she’ll receive, but The Edge of Seventeen is as searing as one can get when it comes to high school while still being able to come to a conclusion that is filled with hope and optimism.