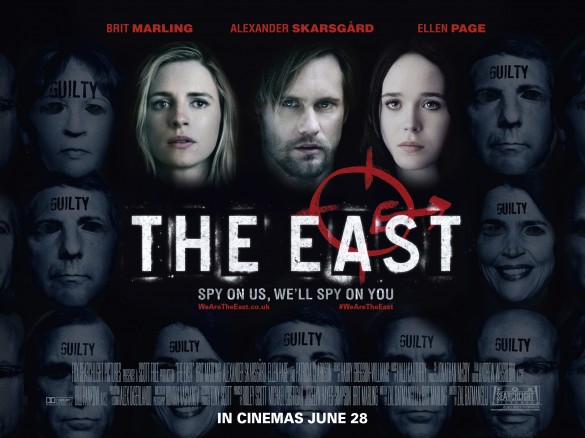 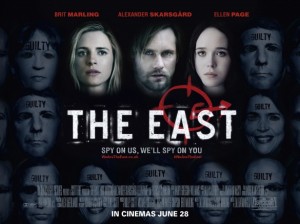 Before writing ‘The East’, director Zal Batmanglij and star Brit Marling spent two months practicing freeganism for research purposes which they described as ‘eating discarded food in the pursuit of a moneyless existence’, going onto base the screenplay on their experiences. This dedication to filmmaking pays off hugely with a tense thriller which ask questions of the viewer, forcing morals under the microscope. Marling plays Sarah Moss, a former FBI agent who goes undercover for a private intelligence firm, immersing herself in the eponymous anti-consumerist terrorist organisation ‘The East’, who attack corporations in shocking stunts which they refer to as ‘jams’. Whilst in the cult den of the anarchists, she encounters leader Benji (Alexander Skarsgård) and Izzy (Ellen Page) who have ulterior motives behind their rebellious actions, as do most of the group, each of them with their own personal vendettas. The twisting narrative and biting script compliment each other, making it increasingly difficult to know who to root for but maintaining a strong interest in an engrossing plot.

Moss represents another link in the recent chain of powerful female leads in both film and television, carrying the torch on for the likes of Zero Dark Thirty’s Maya and Homeland’s Carrie Mathison, though to me Moss has greater likeability. Like Maya, she  makes substantial sacrifices for her work but where Maya’s personal life and background are kept well hidden in ZD30, here we see the flipside to Moss’ lifestyle and the strain that her driven attitude puts on her relationship with her boyfriend. Also, where Carrie Mathison follows her investigation into terrorist activity, her judgement is often not to be trusted due to her bi-polar disorder whereas Moss acts almost as the moral compass to this piece, and as her mindset begins to sway off kilter, we as an audience go with her, or at least that was my perception. These factors combined, Moss is more worthy than her aforementioned predecessors and the emotional attachment to her character holds focus throughout, particularly in the sections behind enemy lines where she adapts to an unsettling new way of life, reminiscent of Elizabeth Olsen’s cult scenes in Martha Marcy May Marlene. The initially chilling clan cautiously welcome Moss but she earns there trust and becomes ‘one of them’, sharing tales with the key figures then sneakily feeding information to her employers, Hiller Brood, but as she becomes more involved forming close connections with her peers, her loyalties are put to the test.

Marling works well with Batmanglij, this being their second collaboration after the successful Sound of my Voice in 2011. Her passion for the project is obvious, and is reflected in her glorious performance. Skarsgård and Page are equally good, his charismatic intensity and her punchy delivery perfect for their roles, and I particularly enjoyed Page’s creeping opening sequence voiceover which was used prominently in the trailers, sticking it to the man stating ‘you spy on us, we’ll spy on you, you poison us, we’ll poison you’, introducing the film with real style and bags of spirit. Even the supporting cast are up to the highest of standards with veteran Patricia Clarkson taking control in moments, displaying screen presence as the influential Paige Williams and British talent Toby Kebbell as Doc, an excellent asset to the cast and yet another interesting, well developed character with a suitably horrific back story. There are no bad parts, and no bad portrayals, a chemistry binding which shines through especially well in parts involving the core members of the ‘The East’ when their strength is challenged by a shocking catastrophe.

For only his second feature sitting in the director’s chair, ‘The East’ is an ambitious film that offers something very different to the wash of unnecessary sequels bombarding screens this year. The vision of Batmanglij and Marling is at the forefront and their enthusiasm is exciting to watch, giving an extremely intelligent, yet alarming picture of the world we are living in today, packed into a twisting piece with characters that are so easy to care about. It’ll be intriguing to see what they do next because on the back of this, I don’t see why they wouldn’t want to work together again. A disconcerting indie gem pulled off with brilliant storytelling, ‘The East’ is low budget filmmaking at its best, with a top drawer cast and a hard hitting story that will stay with you long after the closing credits, evoking a darkly complicit nature to the controversial subject matter.