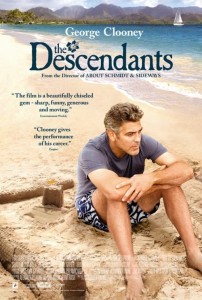 Director and Co-screenwriter Alexander Payne has carved out a successful niche for himself as one of America’s foremost purveyors of the tragic comedy-drama. His movies tend to be amusing in parts but at the same time tackle fairly weighty subject matter.  In Election, a jealous teacher tried to sabotage a star pupil’s bid for School President. In About Schmidt , a grouchy old widower sets out to stop his daughter marrying a guy he can’t stand. Then in Sideways, two friends go on a stag trip where the groom cheats on his bride to be and the best man gets more and more frustrated. Hardly the stuff of laugh out loud comedies. Yet they all possess an ability to mine humour from difficult situations. In The Descendants, Payne once again tackles a difficult subject matter and while there isn’t perhaps as much humour as in something like Sideways, there’s still a bitter-sweet charm to the story which does raise the odd smile.

The other theme that runs through Payne’s work is that of masculinity in crisis, the middle aged man struggling to adjust and struggling to accept the hand he has been dealt. George Clooney’s Matt King is perhaps not as dislikeable as many of the other male leads in Payne’s films, but he is nonetheless a man in crisis and a man in a definite fragile emotional state. At the film’s outset, Matt’s wife is in a terrible speedboating accident and lies unresponsive in a coma. His two daughters, 17 year old Alex (Shailene Woodley) and 10 year old Scottie (Amara Miller) both prove a struggle at first. Matt was never the hands-on parent and his relationship with his daughters is strained and distant. Alex then reveals to Matt that the reason she and her mother hadn’t been talking was that the mother had been cheating on Matt and was in fact planning on asking him for a divorce. Naturally this knocks Matt for six.

At the same time, Matt is the executive trustee of a huge patch of land his family have owned for generations in Hawaii. His various cousins are pressuring him to agree to a sale of the land which will make them all incredibly rich. Matt clearly feels a strong connection with Hawaii and is reticent to so quickly sacrifice the natural beauty his forefathers took such pride in. The island of Hawaii itself is far removed from the picture-postcard view we may see in other movies, Payne’s Hawaii is simply another full functioning place where people live, work and die. The weather may be marginally better and the shirts a little louder, but to the Kings, it’s far from paradise. To quote Matt himself, “Paradise? Paradise can go fuck itself”.

Matt and Alex mange to find out the name of the man who his wife was seeing, a slimy looking estate agent called Brian Speer (Matthew Lillard). Matt takes his girls, and Alex’s male ‘friend’ Sid, to another Hawaiian island under the pretence of a family get away, but with the real intention of confronting his rival.

The bulk of the film revolves around Matt trying to juggle his attempts to reconnect with his daughters while at the same time tracking down the man who was sleeping with his wife.  Clooney is on fine form in the lead role, though Oscar talk does seem a little over the top. He is solid and dependable in the role, conveying Matt’s conflicted emotions well, playing the generic everyman fairly well given that he is Hollywood megastar George Clooney. Yet it’s still a relatively straight forward and unremarkable role for George who is perfectly engaging but best actor of the year? I’m not sure.

Matt has to show great strength as the film goes on not only to juggle the various responsibilities he now has in his life but also to not let his anger at his wife get the better of him. There’s a superb scene where his wife’s father lectures him about how he could have treated her better as she was such a loving and devoted wife and mother. Matt swallows his pride and says nothing, keeping his own pain inside so as avoid tainting his wife’s image in the memories of others.

The two girls playing his daughters deserve great praise for their performances too. Miller is terrific as the ten year old tearaway who despite moments of brattish precociousness really captures the distraught confusion a ten year old child would experience given the difficult situation. Woodley is equally impressive as Alex too in what will surely be a break out role for the young actress. Alex starts off as a teen tearaway seemingly there to torment her father but soon develops into her dad’s co-conspirator and emotional rock. She is burdened with a great deal of responsibility for her age and seemingly comes out of the experience a much more rounded individual. I’m not entirely sure what her ‘close friend’ Sid brings to proceedings exactly as the character seems entirely superfluous other than perhaps to provoke cheap slacker laughs. Nick Krause is suitably affable though as the dim-witted tag along even if his only major contribution is getting punched in the eye by Matt’s angry father-in-law.  This is one of several moments of humour peppered throughout the film which while never producing full on laughs as such, has enough light-hearted moments to justify its comedy-drama tag.

It’s a charming and captivating film which deals with a highly emotional subject matter with a well judged warmth.  The Descendants focuses on human frailty and weakness, both in terms of the critically ill wife and Matt himself. In lesser hands than Payne’s it could have slipped too far into schmaltz territory. Even in the more dramatic scenes however, such as Matt’s tearful final goodbye to his dying wife, Payne and Clooney both ensure it remains poignant and powerful and never needlessly overwrought.