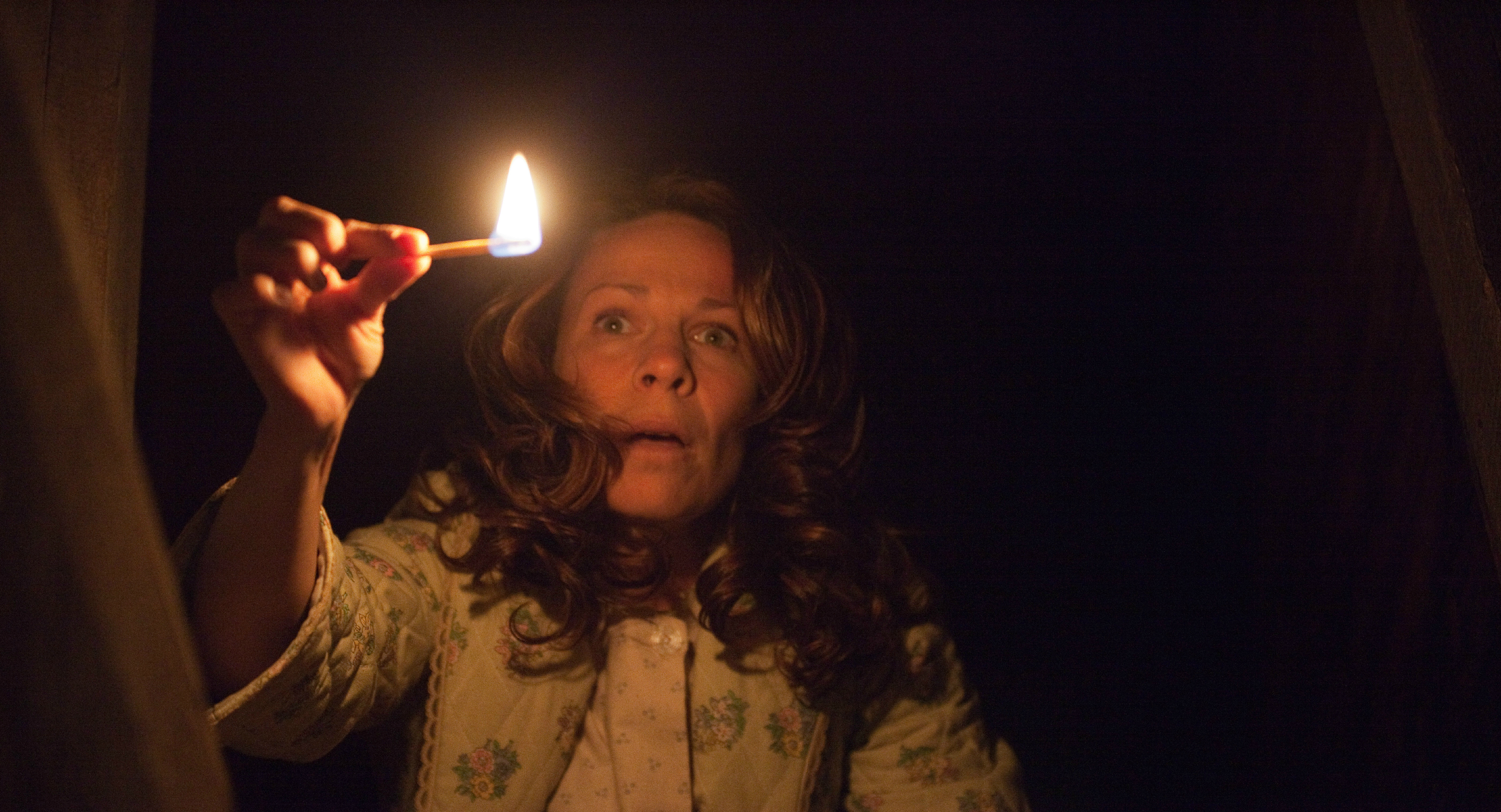 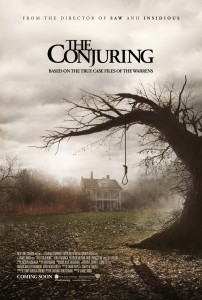 There is a difference between a film that meets the rules of its genre and one that is able to transcend them. What director James Wan (Saw, Insidious) does in The Conjuring is not to approach the film as if it were a horror film, but more a serious drama about a family in crisis. That he doesn’t necessarily forget, but in a way uses the archetypes that make up the average horror movie in smaller ways, at least for the first act of the film, to imply what may or may not happen later. In setting up the expository information Wan is all the while creating his mood, but he is also giving us the tools to develop relationships with these people. He isn’t simply going about setting up scares here and there that ultimately add up to nothing, but he is luring us in and making it unavoidable that we become invested in these characters that will ultimately undergo a life altering experience in the latter part of the film. What The Conjuring also does is to not look at itself as some kind of joke or take its material too lightly. It firmly believes everything it has to offer and doesn’t intend to be anything but sincere about the subject matter. If it were to take on a nature of laughing at the Perron family or a sense of doubt in the main cast that is firmly planted in the conflict from the beginning it would lose all credibility immediately. A deal where if they don’t take it seriously, why should we? The film does take itself seriously though and that is meant in the best of ways as it consistently keeps the tone and intensity any good scary movie needs to help convince the audience that what is going on on screen is as real and threatening as the mysterious sounds they might hear in the middle of the night and dismiss as nothing more than the wind knocking something against the window. It is all about atmosphere and mystery with today’s horror audiences as most have grown accustomed to what kind of scares most horror films will throw at you. Wan uses those same kind of scares, but he executes them in a manner that is much more effective, much more chilling, and on the most important of levels, much more emotional.

While I was a big fan of the first half of Wan’s previous film, Insidious, I thought the latter part made the mistake of giving too much away, showing too much of the antagonists and while there is some of that here it isn’t to the extreme of Insidious. With that film the hook was that it wasn’t the house that was haunted, but in fact a child. Here, we have something fairly similar in that it is inherently the house and the land that the Perron family move into that is haunted by pissed off spirits, but it is by their choice where they go and who they inhabit. It does, in many ways make it all the more frightening to know that the mysterious evildoers don’t have a set order of limitations and that they could essentially do whatever they wish to whoever they so desired, but even further than this Wan takes his knowledge of the horror genre and applies a style to his film that not only evokes the time period in which the story is set, but also by hearkening back to horror movies of old. There is an extra air of creep set in by the fact it is set in 1971 where certain aspects are limited and the music of the era now takes on a persona of its own due to its use in countless other horror movies. Wan uses his same sleek camera movements paired with a tan palette to give off an aged, but valid account of the events his film is capturing while at the same time evoking that specific style of 70’s horror films. He keeps things minimal, simple and in an odd way kind of innocent. He doesn’t rely on the blood and guts or gore factors to gross us out, it doesn’t even seem this could land in the same category as those films as what is used to try and scare us here is the presence of the unknown. I have always thought a scary movie without music might be scarier than those who use a loud clash or single note to emphasize where you are supposed to gasp and I’ve always found ghosts or demons or whatever might haunt our unsuspecting heroes all the more scary and intimidating if they remain lurking in the shadows. Wan uses shot composition and lighting to great effect here in that vein while the score by Joseph Bishara could have been reduced several times throughout and I probably would have found it all the more chilling, but hey one out of two isn’t bad.

What intrigued me most about the project though was just how well I came to feel I knew these people. Each of the four main adult characters are presented with genuine characteristics and a willingness to help others out and be understanding to those they may not have otherwise ever engaged. The leaders of the Perron clan, Carolyn (Lili Taylor) and her husband Roger (Ron Livingston) are so earnestly optimistic when they first arrive at their new house it is impossible not to be just as hopeful for them. It isn’t long after they move in that strange things begin to happen. Whether it be the somewhat stock signs of the dog not wanting to come in the house, birds flying into their windows or the clocks stopping on a certain time, these are things we’ve seen before, but they are only the small facets, little pieces of tension that help build a stressful atmosphere which is in turn what our main antagonist is wanting to do. The Perron’s have five young girls (Shanley Caswell, Kyla Deaver, Joey King, Mackenzie Foy and Hayley McFarland) each of which have a moment in the spotlight but are purposefully not singled out or given any defining features that would make them seem all the more ripe for possessing. No, the film wants to make it clear that everyone in the house is under a watchful eye of whoever or whatever it is that is watching and as it reaches the point where each girl is too scared to sleep in their rooms and begin to smell the stench of old meat moving around the house that it becomes clear they need to enlist the help of professionals. Enter Ed and Lorraine Warren (Patrick Wilson and Vera Farmiga) a husband and wife team who specialize in hunting down ghosts, demons, and spirits while relying on their strong sense of faith to keep them separated from the world they so often encounter. They acknowledge that if they believe in God they must also believe in the devil and when they come into contact with the spirits that haunt the Perron house it is clear they are encountering something much stronger, much different than that of what they’ve seen before.

In the end, Wan is clearly a master at his craft while ultimately being able to show restraint where other directors might choose to either show too much or simply not have the skill of timing a scare as Wan does. Those skills are very important in today’s horror genre and it takes the right level of execution to truly scare the jaded moviegoers of today. Why the film doesn’t rate higher in my books is due to the fact that despite finding the film very well made, an interesting story with real characters, and some truly chilling moments it never reaches the heights of being as scary as I expected. This may actually be unfair as it is unlikely any film nowadays will be able to conjure (no pun intended) up the right amount of scares to have me ducking in the theater seats, but with the level of buzz surrounding the film I expected more from it. What it does achieve are those chills. It is a film that feels effortlessly creepy and there is something to be said for that. What I expected to feel and even kind of wanted to feel was to be filled with a sense of apprehension, of alarm, of panic or of pure dread. I wanted to be surprised by what I didn’t see coming from around the corner, but I never found myself shaking from what I’d just seen, but instead I was nothing more than a little creeped out. Don’t get me wrong, you could do much worse than The Conjuring and Wan along with Scott Derrickson are two horror directors you should continue to watch out for, but it seems Wan has run out of tricks in his horror bag at the moment. I do hope his Insidious Chapter 2 that comes out in a mere two months proves me wrong and turns out to be something more than the rushed job it seems to be. I am certainly optimistic about these possibilities and would speak kindly of The Conjuring were I asked about it, but I would offer a word of caution that it isn’t anything you haven’t seen before which is what I was hoping for. If you are content with a well made horror film that features credible performances and lush cinematography with a strong sense of atmosphere I’d say go for it; if you’re looking for something truly revolutionary than this, unfortunately, isn’t the game changer we were hoping for.