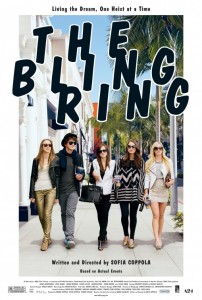 It’s not that I’m not a fan of Sofia Coppola, it’s simply that I haven’t seen any of her work outside of her 2003 breakthrough Lost in Translation and to make matters worse I was only sixteen when I watched that film and so I highly doubt I completely caught the gist of what it was saying or could analyze the points it was trying to make. I’ve always been intrigued by her work, both The Virgin Suicides andMarie Antoinette have been on my “need-to-see” list for quite some time, but what would have likely best prepared me for her latest feature, The Bling Ring, is her film just prior that also takes a look at the vapid Hollywood lifestyle and the re-evaluation of it when a genuine life-changer is thrown into the mix. I’ve heard nothing but good things about that film, titled Somewhere, and am more interested than ever in checking it out now that I’ve seen what Coppola was going for in The Bling Ring. Despite the fact that it is extremely evident what the writer/director was going for in her latest film none of it ever really transfers over into the final product. The idea of exposing these dull brats for what they truly are and driving home the point of how flat and tasteless the results of their actions will eventually be which will of course echo in their older years has already been done this year, and to much greater effect. Harmony Korine served up a commentary on the youth of today and this culture they worship and want so desperately to be a part of earlier this year. Spring Breakers bombarded us with attractive images and ridiculous rituals that have become acceptable among the college set while ultimately teaching us through its main character that being eager to learn and experience new things can also lead to maturity if one is able to put the world in perspective and not fall for the instant gratification. The Bling Ring doesn’t have anything as heavy to say, it simply wants to show you how materialistic the kids of California have become and how this obsession with celebrity for sake of celebrity isn’t a good sign for future generations. It gives us nothing more than the facts of a true story, but nothing about its execution makes it shine.

Based on the article, “The Suspects Wore Louboutins,” by Nancy Jo Sales of Vanity Fair (which Emma Watson’s Nicki views only as flattering when the interview takes place in the movie) the film tells the real-life story of a group of fame-obsessed Los Angeles kids who managed to break into the mansions of Paris Hilton, Orlando Bloom, Rachel Bilson, and Audrina Patridge among many others and come away with an estimated $3 million in clothes, jewelry, and countless other valuables. Naturally, once this group of spoiled valley kids were caught and taken to court for the charges brought against them they only turned into what they desired most. It is in these sequences near the end of the film that display the level of self-importance these kids reserve for themselves and how the people surrounding them only enable it. Up until this point though the movie falls surprisingly flat. If it is any justification to the fact these kids didn’t receive all they wanted from their punishment I had not heard of the case prior to the film and only just skimmed the Sales article to get a sense of what the movie might be. Sales also published a book that shares the title of the film adaptation and despite having not read it I can very much imagine how the written word could make this subject seem perfect for lending itself to cinema. Not only is the material timely, but it has the capability of digging into the psychology of the shift in how kids act now and why those actions have changed while not necessarily evolving but instead, as in this case, becoming stagnant. Even more interesting is that these events took place at the time when the country was in a questionable place financially. In these times when many people were/are being laid off and the majority of Americans are living paycheck to paycheck these already rich kids are sneaking into houses to make themselves all the more rich and glamorous. There might have been some kind of empathy for these characters were they feeling the effects of the recession and stealing from the over-privileged to help their own families, but there is no such selflessness involved. Instead, it is all for the sake of luxury and that all encompassing, lifestyle addiction that is the fame monster.

Still, as a film, I can’t decide if it’s the fact the subjects are so repulsive or that is all a rather boring affair that makes the experience of it the film rather underwhelming. I understand that the point is not to paint these people in a light that makes them to be anything more than they actually are and to drive home the point that these kids are not smart, they’re not going to develop into anything that will contribute to society and make it any better. That they have been sucked up into the lifestyle vacuum that they are exposed to every minute of every day through their phones and their social networking, but none of this comes through in the execution. What the film does show is how it has become a world of constant self-promotion, constant one-upmanship so that you can come off as the better, more successful, and the prettiest of your group of “friends” on facebook or followers on twitter and instagram. Some of the most telling scenes in the movie are more like certain shots where the group of burglars that consists of ringleader Rebecca (Katie Chang), sexually confused Marc (Israel Broussard), the too hip for her own good Chloe (Claire Julien) and best friends Nicki (Watson) and Sam (Taissa Farmiga) who are home schooled by Nicki’s mother (Leslie Mann) sit in a trendy bar or nightspot and while they will sometimes get up to dance they mainly congregate around a table with drinks (all of them being under 21 at the time this happened by the way) and snap pictures of themselves. It is something everyone does, you can look at your instagram feed right now and likely see no less than ten “selfies” but when watching these kids act it out on screen it only becomes more evident at how self-involved they are. They have no desire to better themselves only their wardrobes and that is because they already believe themselves to be God’s gift to the earth and thus the reason they constantly take pictures of themselves with their luxury brand purses and clothes and stacks of large bills acting like it is nothing more than pocket change so as to create a sense of envy from their friends very similar to what they feel for the celebrities they’ve robbed.

Going so far as to look at the films soundtrack is one way to experience the shallow quality of the subjects. While the music is flashy and melodically engaging for the most part it is not art, but more a product that allows the performer into the elitist club the members of “the bling ring” so desire to be a part of. It is nothing that stimulates the mind or challenges the listener to find something more in what it has to say. It is tuneful, something you could bob your head along with, but it leaves you with nothing and unfortunately the movie does the same thing. That is not to say the film ultimately becomes the same kind of hollow product that has formed the current fame-obsessed culture these kids fall into, but despite offering a few interesting facets into the state of mind real celebrities have the film never seems to know exactly what to do with its interesting premise or how to convey the ideas Coppola so clearly wants to get across. She is no doubt just as disgusted with the kind of mentality that has been picked up by this, my, generation as the older gentleman who was sitting behind me and walked out less than halfway through the movie was. The fact he did this proved to me Coppola was unsuccessful in delivering the themes she so earnestly wanted to. It is easy to get caught up in the attention and flattery that comes along with celebrity and Coppola seems to have succumbed more to this than being able to differentiate between the “why” of the crimes committed and simply displayed the “what” of it all. It presents a picture played out by talented actors, Watson of course being the most notable and delivering a perfect valley girl dialect that made me cringe every time she spoke while unknowns Chang and Broussard do well with the more leading roles. The likes of both Mann and Farmiga are more wasted than anything though Farmiga does get a few interesting pieces. There is no character development to any of them and that isn’t Coppola’s fault, but is in fact likely an accurate portrayal of their real-life counterparts. That the film doesn’t display itself as a commentary on the actions and mindsets of the culprits but more of a straightforward account of the events that took place make it nowhere near as interesting a movie as could have been made from this ridiculous story.