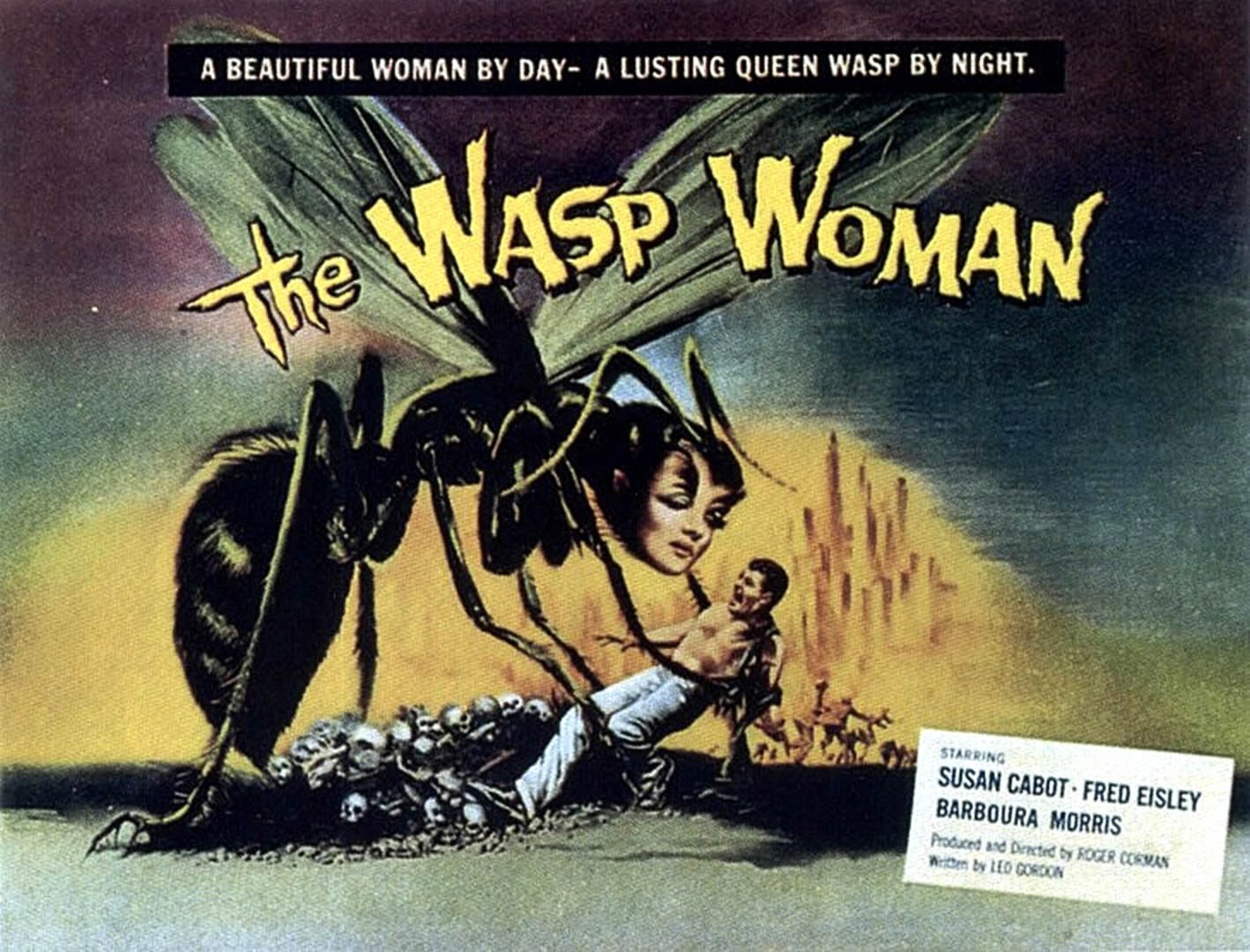 Fun Fact: over 80% of the animal species on Earth are insects. That is a lot of insects, bro.

Back in the 50’s when the cold war was all the rage and the red scare was afoot, Hollywood reacted with its own version of Duck and Cover; they decided that giant insects would be the sure thing, and so they cranked out a swarm of the menaces. Looking back on things, life was easier somehow.  And so I present for you my ten best bug films. Hail our insect overlords, long may they rule!

Daikaiju is a Japanese term loosely defined as “giant” and Japanese cinema is loaded with all types of giant creatures, from Godzilla to Mothra. Warner Brothers decided to jump on the bandwagon and in this case, it is giant ants, caused by atomic radiation, in the New Mexico desert.

Them! was originally planned to be shot in color and 3-D, but producers got nervous and changed their minds.  This was the first of the big bug movies of the 50’s and it remains the best. Dr. Harold Medford’s (Edmund Gwenn) quote arbitrarily sums up the entire situation accurately: “When man entered the atomic age, he opened a door into a new world. What we eventually find in that new world, nobody can predict.”

Okay, technically a tarantula is an arachnid and not an insect, but nonetheless I have a soft spot for this late night horror film and mostly it is because of its cast: John Agar is Dr. Matt Hastings, Leo G. Carroll is Prof. Gerald Deemer, and the mandatory love interest is played by Mara Corday as Stephanie ‘Steve’ Clayton. Here we are in the desert again and Professor Deemer is hard at work in the lab on a secret formula to end world hunger; it seems that he has invented an injection that makes various animals mutate and grow many times their normal size.  Unfortunately the prof has been testing his serum on a tarantula, and it is now the size of a house and it is loose and on the move.

Using a real live spider filmed behind a green screen, the image of a giant tarantula creeping around in the Arizona desert was enough to give me the willies.  Tarantula is a blatant rip off of Them! but who cares; we got a giant arachnid, a babe scientist, and Leo G. Carroll sporting some face altering makeup; this is perfect rainy day cinema.

A volcano erupting in the Antarctic thaws an iceberg in the Arctic and releases a giant monster, a huge praying mantis. The Deadly Mantis is the next film in our series and it is the first that features our capital being threatened by a giant insect.

Unfortunately not as entertaining as the previous films, The Deadly Mantis nevertheless delivers the goods when it comes to watching the insect in action; there are scenes where it scales the Washington Monument that look appropriately realistic, and this time out nuclear fallout is not to be blamed; the insect was frozen in ice from prehistoric times! Technically speaking praying mantises are hardy carnivores, so a giant one would certainly be a troublesome issue, but thank god that the military intercedes and kills the insect in the highway tunnel.

Watch this if only you are a big bug fan.

There is something about this film that absolutely horrified me as a kid; the beginning with its suicide/murder scene troubled me, and the ending still packs a punch when Vincent Price and Charles Herbert find the father/fly with the human head crying “help me” as a gigantic spider slowly advances to consume its prey.  No wonder David Cronenberg decided to re-make this gem in his own distinct style 28 years later.

Scientist Andre Delambre (Al Hedison) has just been discovered with his head and arm crushed under a hydraulic press. His wife, Helene (Patricia Owens) was the one to find the corpse, but she is telling a fantastic story to Andre’s brother, Francois (Vincent Price), that her husband killed himself, but with her assistance. The police are called and Inspector Charas (Herbert Marshall) is taken aback by Helene’s subdued appearance; she is apparently in shock, but later is diagnosed as being schizophrenic.

Helene tells a story about teleportation devices in the basement laboratory and how it went terribly wrong.  Now if they could only find that accursed fly with the white head that was buzzing around the house earlier, things would finally make sense. Another thing, Vincent Price always creeped me out as the brother-in-law on the make especially when the corpse was hardly cold.   This film was based on George Langelaan’s short story “The Fly” which first appeared in the 1957 issue of Playboy and then was adapted to the screen by James Clavell. An excellent bug movie that still holds up after all these years.

Jack Arnold was a prolific director and one of the leading directors of Science Fiction films from the 50’s; he directed It Came from Outer Space (1953) and The Creature from the Black Lagoon (1954), as well as Tarantula and this film. Based on a Richard Matheson novel, this film is an exploration of the theme of a man losing his place in the material world.

While out in a boat Scott Carey (Grant Williams) is exposed to a cloud of atomic toxins; six months later he is shocked to find that not only is he losing weight, but that he is shrinking as well.  Soon Carey is rapidly depleting in size, and after a savage attack by a house cat, he is forced into seclusion in a confined basement; dwarfed by an ordinary box of matches, the shrinking man does everything he can to survive.  Down here is where an ordinary house spider becomes a huge predator, and a quest for the basic elements of living take on epic proportions.

Williams narrates this story and it reminded me a lot of typical film noir: an innocent man living in a dangerous world is governed by the whims of Fate, and he finds himself trapped in the wrong place at the wrong time.  A surprisingly interesting film that holds up beautifully.

Nothing smells cheaper than a Roger Corman directed film; his work was constantly featured on Chiller Theatre and other horror movie shows when I was growing up, and so it is with fond memories that I recall this low-budget sci-fi gem.

Janice Starlin (Susan Cabot) is the owner and president of Starlin Enterprises, a Manhattan-based company that produces female beauty products, but sales lately have taken a plunge. What could the cause be? Perhaps it is because Janice is starting to look a little worse for wear herself and you know how flighty consumers are. Enter Dr. Eric Zinthrop (Michael Mark), a scientist that claims that he has developed a serum, made from the royal jelly of wasps, which will reverse the aging process.

Janice is dumb enough to fall for this malarkey, and quickly offers to not only buy the formula from him, but she is willing to be the test subject to see if it works.  In no time Janice is looking twenty years younger, but there is an unfortunate price to pay: the serum transforms Janice into a killer wasp! Yeah. I bet that you didn’t see that coming.  Watch for an appearance by Corman regular, Bruno VeSota as the night watchman.  Woman, thy price of vanity is high indeed.

Once again, we find ants on the warpath, and this time they are crafty and super intelligent.  Directed by the man that single-handedly changed film credits from boring lists of people that did stuff to a dramatic art form, the one and only Saul Bass.

Two researchers, biologist Dr. Ernest Hubbs (Nigel Davenport) and communications expert James Lesko (Michael Murphy) are sent to the Arizona desert to investigate reports of fiercely aggressive ants. This hyper intelligence is the result of a blast of cosmic radiation, and when Dr. Hubbs detonates some explosives at the nests of the ants, all hell breaks loose. This is more than a run of the mill nature strikes back film, think of a Kubrick helmed film about highly intelligent ants, and you get the picture.

Ken Middleham’s close-up insect footage is amazing, Saul Bass’ direction is point on, and the film only features a cast of six. This film manages to get under your skin!

John Saxon alert! This is more a sappy nature goes berserk film than anything else, and it features some completely campy 70’s style cinema. Director Zacarias, he of Demonoid fame, can barely mange to string together a story line that makes sense, but basically corporate greed is to blame for the bright idea of smuggling killer bees from Brazil in order to increase profits and the honey supply.

John (John Saxon) and Sandra (Angel Tompkins) are the two central characters that find themselves in this mess of a film, and watch for character actor John Carradine as he wonders what the hell he is doing in this inept waste of time.  Bees are everywhere in this film and boy, are they pissed off too! Supposedly Jack Hill was originally hired to helm this piece of exploitation, but he got fired, so we got Alfredo Z.

Ah, here is an intelligent horror film. David Cronenberg is famous for his films that usually tackle a mind-body issue, i.e. Shivers (1975), Rabid (1977), and Videodrome (1983).  Cronenberg is not squeamish and he is certainly not afraid to portray body horror in all of its graphic detail.

This is through and through an Eighties film though and that means that we will have some big hair via Veronica Quaife (Geena Davis); but don’t let that scare you off.  This is basically a remake of the 1958 version, but add some incredible special effects makeup and that Cronenberg tilted outlook, and you have a masterpiece of modern horror. At the center of all the gory special effects, you have that most dangerous of all emotions, and that is love.  Still shocking even after thirty year’s time!

Mira Sorvino (what ever happened to her career?) plays a scientist named Susan Tyler that is responsible for a Judas Breed of designer roach: half-mantis, half-termite, that can mimic roaches, invade their nests, and kill them.  This will put a stop to the plague that has invaded Manhattan and the roaches that are responsible for spreading the disease.  We fast forward ahead three years, only to find that the pesky critters that were supposed to be sterile, have been breeding and evolving.

Charles S. Dutton as Leonard portrays a mean, lazy NYC transit cop and he has a great death scene too.  This film will make you squirm with all of its icky implications and graphic ooze; this was Guillermo del Toro’s American debut film.