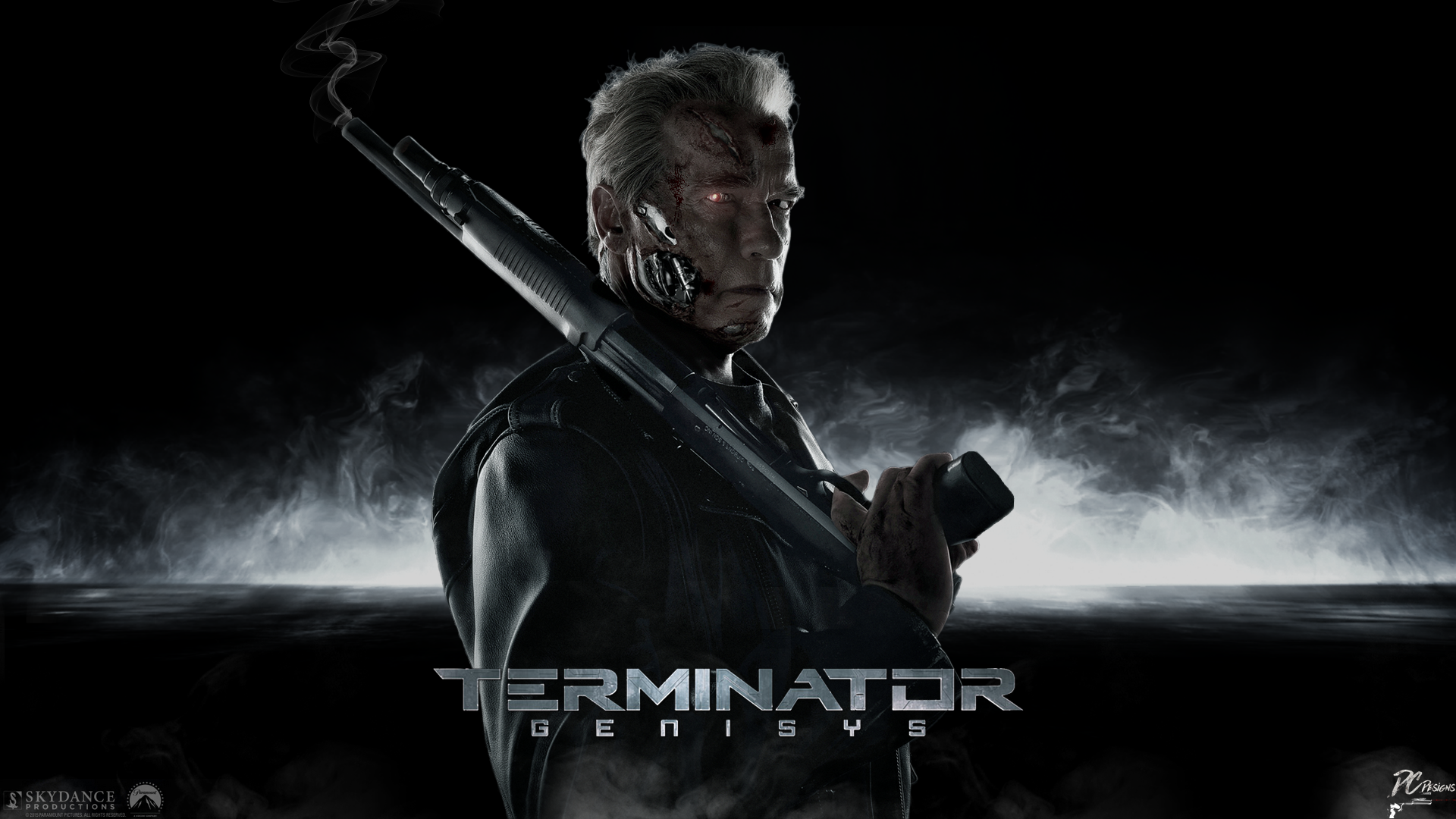 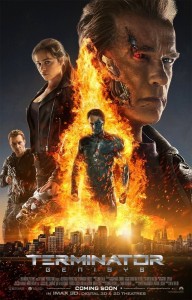 The Terminator saga began in 1984 as an imaginative tale about a young hero trying to protect an innocent woman from a time-travelling cyborg assassin, sent from a post-apocalyptic future in which a handful of humans are at war with the Machines. Since its inception, James Cameron’s apocalyptic franchise has been battling those relentless, shiny, skeletal machines. Many things changed, many time-lines were reshaped and only ‘The Terminator’ himself apparently, stayed the same, albeit a bit creakier.

So many actors have played John Connor, saviour of humanity, Sarah Connor his mother and Kyle Reese his father, it’s already enough to make your head spin, let alone have them flitting about between time-lines and altering history (remodelling their faces too, it would seem) – but hey, ‘He’s back’ though, same as ever, the original Terminator ‘Cyberdyne Systems Model 101’ otherwise known as Arnold Schwarzenegger – to use his new catchphrase – ‘Old but not obsolete’.

Following a prologue set in 2029, that serves to introduce us to some of this film’s new cast, Terminator: Genisys begins, to the delight of aficionados, with a recreation of the opening of the original film. In this latest movie, Jason Clarke plays John Connor, the leader of the human resistance. As before, Connor is sending his lieutenant, Kyle Reese (Jai Courtney) back in time to protect his mother, Sarah Connor (Emilia Clarke), from the cyborg hit man that has been sent to kill her so that her son John will never be born. Once again, that killer robot is played by Schwarzenegger, whose younger, 1984 body has been digitally spliced into the film.

However, due to various time-bending shenanigans, Kyle discovers that the 1984 into which he has been dropped is not the familiar timeline of the first film. In this particular 1984 that other, more advanced model of robotic ‘Terminators’- the pesky liquid-metal T-1000 – (here played by Korean action star Byung-hun Lee) is waiting to hunt him down.

Also, in this alternative branch of time, Sarah Connor is not the unwitting damsel in need of protection – ‘Come with me if you want to live!’ is her introductory line to the bemused Kyle Reese.  She has been raised from childhood by Schwarzenegger’s protective and now somewhat aged, Terminator, whom she has affectionately nicknamed ‘Pops’. Sarah is already the warrior woman that actress Linda Hamilton so strikingly morphed into in Cameron’s second film. Unfortunately, Emilia Clarke (whose casting seems a cynical attempt to capture the Game of Thrones fan base) isn’t nearly as impressive or convincing as Hamilton’s “T2” Sarah. Even at 28, Clarke has the appearance of a wide-eyed, if feisty, school girl, and she looks a bit teensy-weensy wielding those awfully big guns.

At first, the sight of Schwarzenegger reprising what is probably his most iconic role provides a pleasing retro thrill, and the film allows us to wallow in nostalgic references to the greatest moments of its predecessors, but these connections to previous movies do try a bit too hard to persuade us that this is a better movie than it actually is.

Time-travel plots are always a risky proposition. One has to tread carefully and methodically to get things right. It soon becomes clear however, that director Alan Taylor (Thor: The Dark World) and writers Laeta Kalogridis and Patrick Lussier are generally stomping around the time-line, making a muddy mush of the saga’s erstwhile mythology, stretching rules and tweaking tenets to make an idea fit into the mould of their storyline. Don’t waste your time or energy trying to make sense of the various paradoxes and implications of the time-jumping plot. Ignore the waffle spouted  about ‘quantum fields’, ‘nexus points,’ and the nefarious power-crazed-app called Genisys, who briefly materializes as a Time Lord, er, I mean,  as Matt Smith – none of it makes sense.

Even some of the characters in Terminator: Genisys are hard pressed to keep track of all the threads. “How can I remember a past I’ve never lived,” asks Kyle, who after being dumped in 1984 starts hallucinating a childhood far more conventional and idyllic than the one he actually had. “I’ve got to know what’s going on!” bemoans a befuddled J.K. Simmons, a cop who, in 2017, remembers meeting Kyle and Sarah back in 1984. “We’re here to stop the end of the world,” replies Sarah matter-of-factly (if not entirely convincingly) – basically she’s telling him, and the audience, to just shut-up and forget about the niggly details. This particular cast are clearly game to join in running around firing incendiary devices and exploding things, but none of them have enough charisma to distract us from all the nonsense they have to pretend they believe in.

Terminator: Genisys may be silly time-travel, but it remains nevertheless, a frenetically paced fun-ride. Part reboot, part sequel, possibly part remake, the movie is fun and flawed, and Schwarzenegger, at 67, still manages to enjoy the limelight and kick some ass – Yeah,  he’s back alright.

James Cameron, who co-wrote and directed the first two Terminator films, was wisely brought in as a ‘character consultant’ by Skydance Productions. Thank goodness that he was, as his input was undoubtedly necessary.  So mercifully, in some ways Terminator: Genisys hearkens back to what made the franchise fun in the first place. It can’t hold a candle to Cameron’s first two instalments though, which were well engineered entertainments, combining interesting and intricate narratives with thrilling action mayhem.

Cameron has called Terminator: Genisys ‘the official’ third Terminator film, but really it’s another sequel, and the rumour is that there are possibly another two sequels waiting to be ‘greenlighted’. But what does it say, I wonder, when a movie that was once praised for its hard-edged and bleak futuristic vision, begins to fall back instead on a sense of cosy nostalgia and a 12A certification?