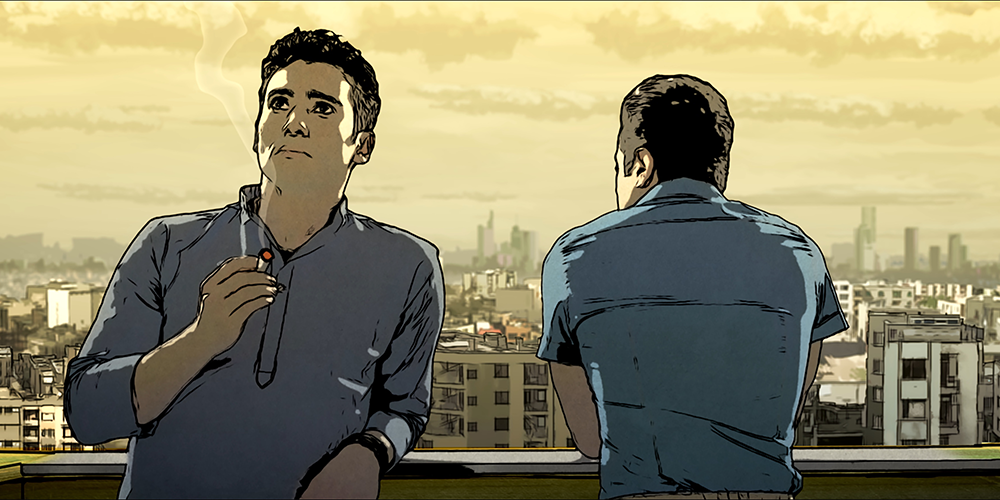 Something of a hidden gem to be found in last year’s Critics’ Week at the Cannes Film Festival, Ali Soozandeh’s feature film debut, Tehran Taboo sets out with the explicit mission of revealing the dark underbelly of the eponymous city without any interruptions from the state. Due to the restrictions of filming in the city, Soozandeh took the ambitious road of filming and adding rotoscoped animation to his tale, a story about three self-confident women and a young musician, whose lives cross in the schizophrenic world of the Iranian capital. Sex, corruption, drugs and prostitution go hand in hand in this seething metropolis, otherwise under the reign of strict religious laws and forcing the avoidance of prohibitions to become an everyday sport amidst the taboos of individual self-realisation.

A visually enthralling picture, Soozandeh’s characters find themselves again and again in predicaments both relatable and genuine. Yet, Tehran Taboo is more interested in the wider scope of its context, rather than the lives of those within it. As a mundane existence is brushed away, Soozandeh questions the cultural and political face of Iran, showing no fear in depicting sex, adultery, corruption and prostitution within a stern religious city. A city whose religious undertones add another level to the film entirely, and fire a bullet that further exploits its citizens by keeping their desires at bay. As original as it may in fact be, however, it owes a distinct debt to other societal animated tales such as Waltz with Bashir and Persepolis, though this is unavoidable given the overlapping subject matter.

The rotoscoping makes for an interesting gamble, a necessary one – since the subject matter, predictably, renders it unfilmable in Tehran – and yet the rough animation intensifies the ambiance of the film and sets its own dark tension within the tale. It isn’t necessarily as effective as you would hope – during tense scenes, in particular, characters are denied more nuanced visual expressions – yet this makes for a minor flaw, and one crucial toward the tone of the film itself. That said, while the context of Soozandeh’s film may be dark, it’s more riddled with humour than you’d expect, with an almost darkly British comedic sensibility carrying it to the finish line. Well paced, to the extent you’ll wish it were outright longer, Tehran Taboo’s one that’ll stick in the mind, and make for a worthy watch for any cinephile.