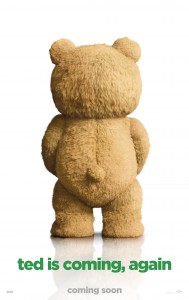 What works in Ted 2 is what made the first film a runaway smash and that is the undeniable chemistry between Mark Wahlberg and the titular potty mouthed bear voiced by writer and director Seth MacFarlane. What doesn’t work about this unnecessary but warranted sequel are coincidentally the same things that didn’t work the first time that being the dispensable subplot involving Giovanni Ribisi’s character. Don’t get me wrong, I think Ribisi is an interesting actor and the weird, off the wall stuff he does in these movies is not what makes his parts bad, but more they simply feel tacked on and only present to create some kind of conventional plot that allows our heroes to overcome some kind of danger so that we get a happy ending. The thing is, MacFarlane has enough of a conflict on his hands here that Ribisi’s subplot is even more extraneous than it was in the first film. The same can be said for many of the jokes in the film in that they are largely superfluous. No matter how funny they might be the majority of them don’t pertain to the story in any fashion. In fact, Ted 2 feels less like a real movie and more like a series of scenarios MacFarlane thought might be funny to see these characters in that are strung together by the overriding quest to prove Ted is a person. As a result of this series of one-note jokes (and others that are revisited more times than necessary) the script feels patched together with the biggest example of this being the comic-con set finale that seems to only serve as the backdrop so that MacFarlane can make as many pop culture references as his heart desires. This, for me, is a double edged sword as I appreciate the references to a degree (I laughed at Patrick Warburton showing up dressed as The Tick than anything else in the movie) in that I enjoy a rough around the edges R-rated comedy that has a flair for pop culture awareness and lampooning such culture, but the over-reliance on these jokes for its source of comedy makes it obvious there is little care taken to evoke jokes from the actual story and therefore makes the story feel less important. In the end,Ted 2 is a movie that I laughed at quite frequently, but could have just as easily done without being as I saw the first one and this sequel (especially by the third act) ends up feeling like a complete retread of the original.

We pick right back up with Ted and John Bennett (Wahlberg) as Ted and Tami-Lynn (Jessica Barth) are now newlyweds, but John and Lori (Mila Kunis) have since divorced leaving John more than a little depressed at Ted’s wedding. Things seem to stay this way for the better part of the first year of Ted and Tami-Lynn’s marriage until their relationship runs into some rough waters. There is arguing over the typical stuff-finances, food, the fact Ted doesn’t have a penis which coincidentally leads to Ted’s resolution for he and his brides troubles. What could possibly be the best thing to turn their turmoil-laden marriage around? A baby of course, but given that small aforementioned detail concerning Ted’s lack of any male anatomy he and Tami-Lynn will have to find a sperm donor. Ted’s first option in Flash Gordon himself, Sam Jones, is a bust as that guy is fresh out of sperm thanks to copious amount of drug use in the eighties and so naturally his second choice is Tom Brady. You’ve seen the commercials so you know where this leads though the scene, as part of the bigger movie, feels lacking in a real punch line. Instead of putting the star on top of the Christmas tree, MacFarlane opts for the straightforward approach of John asking Ted why he isn’t good enough to be the sperm donor. The two kiss and make-up leading to a scene at a sperm bank that is truly outrageous and the sole bit in the movie that really goes all out. In another turn of unfortunate events, artificial insemination won’t work either given Tami-Lynn’s past drug use as well that has more than destroyed her uterus. The couples final hope is that they might be able to adopt, but when it is brought to Ted’s attention that he isn’t classified as a person in the eyes of the law, but rather a piece of property, he and John decide to fight the system and, with the help of Sam L. Jackson (Amanda Seyfried), take their case to court to prove Ted is in fact a real person.

This is all well and good given it allows MacFarlane to touch on some timely and relevant issues that will no doubt earn Ted 2 a little more credit down the line when we look back and see exactly how big of a reflection of the time the film is, but for now it’s more interesting to discuss why MacFarlane continues to forge comedy as a cover for the type of movies he seems to truly desire to make. As with last years flop, A Million Ways to Die in the West, MacFarlane is a man who enjoys the aura of classic Hollywood and likes to elicit the feel of fads and times gone by with his several, (somewhat) subtle drops that don’t necessarily define the type of movie Ted 2 is, but certainly clarify a distinct tone that gives it a style unique to a modern comedy. It’s as if, in the quest to create something original, MacFarlane decided he would meld his love for all things retro with the strong vulgarity in his sense of humor that would allow his product to be perceived as cool and edgy while at the same time displaying his knack for what might not be considered trendy in the freshest sense of the word. This need to resort to an extended opening credits sequence with lavish choreography and grand musical production is just the tip of the iceberg of the writer/director’s trip through time. If the opening credits are an homage to the 1930’s/Busby Berkeley numbers then by the time we reach the mid-way mark of the movie we’re in the 1980’s as MacFarlane indulges in something of a John Hughes dance number in a library. MacFarlane makes plenty of other references to things he loves whether it be the left field inclusion of Nelly’s “Ride Wit Me” or the more in line rendition of “Mess Around” as performed by Ted while driving. The musical infusions continue even as Seyfried’s awkward Sam breaks out a guitar and strums a tune as forest animals flock to her pretty voice. It’s not that the joke isn’t funny-I laughed, but by the time this scene comes around the intended low key affinity for song and dance has become so apparent it feels more wedged in than congruent to the story the film is trying to tell.

Then there is everything else Ted 2 is trying to accomplish which pushes it closer to the two hour mark than any comedy should ever really have reason for reaching. It is strange that the movie would seem to have so much material though as both the script and the production feel rather lazily constructed. While the opening credits sequence may be a bit much and rather out of touch with the rest of the film it at least breaks us away from an opening series of awkwardly acted and edited scenes that bring us up to speed on the events in between the two films. While the first half hour of the movie sets up the main conflict for the rest of the narrative to explore it could have been trimmed to a mere ten minutes and the movie would be all the better for it. It doesn’t feel Ted 2finds its groove until the introduction of Seyfried’s character anyway (by the way, who pulls out a bong in the middle of a business meeting and are weed jokes still considered funny? Just curious) and even after this MacFarlane’s lackluster filmmaking skills can’t be hidden with his choices feeling as lazy as Wahlberg’s wardrobe. In any given scene there are so many cuts due to so much coverage that it’s beyond obvious MacFarlane is concerned only with getting all that’s necessary to deliver his jokes rather than telling the story through those jokes and using filmmaking techniques to convey and enhance their effectiveness. It may also be the last thing on MacFarlane’s mind, but the guy doesn’t utilize his space well at all leaving many scenes feeling as artificial as Ted is accused of being.

On the plus side, Wahlberg is always so genuine in his comic endeavors and the film somewhat survives on his willingness to embrace the ridiculous premise and put forth an authentic portrayal of a tough guy who boldly claims a teddy bear as his best friend. As with her Les Miserables costar, Eddie Redmayne, Seyfried though only continues to irritate me more and more with each role. She comes off as a person who wants to be cooler than she is, but as it doesn’t come naturally it feels forced which inevitably leads to cringe-inducing moments. John Slattery, Morgan Freeman and John Carroll Lynch are hardly utilized despite each being top tier talents that could lend any project a high degree of credibility. This all may sound a little harsh and it should for despiteTed 2 being a funny film and a movie anyone could have a fine enough time with it largely feels like it’s scarping from the same barrel the first one came out of and more times than not it’s hitting the bottom. In all seriousness,Ted 2 could have doubled as Transformers 5 with the amount of product placement it loads in (as well as Wahlberg) while not taking advantage of inherent comic opportunities such as who owned the barn that Ted crashes a car into that sits on the edge of a pot field. It is prime territory for a Christopher Lloyd-esque cameo a la Million Ways (the best part of that film), but there is nothing done with it and instead we get a random Liam Neeson cameo that is admittedly funny, but has nothing to do with the rest of the movie. Unfortunately, that’s the story of Ted 2‘s life.