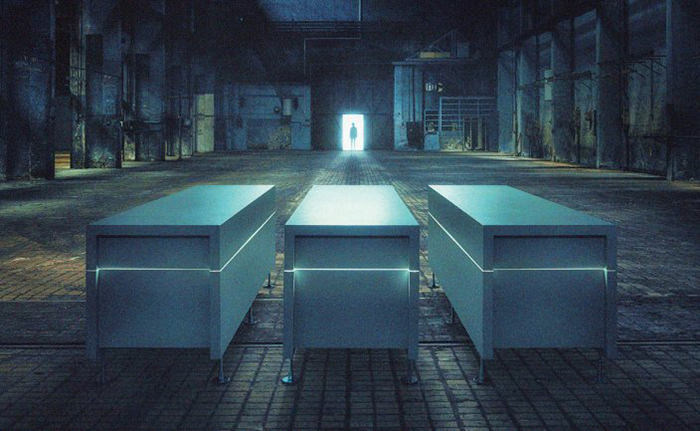 Alright, granted, this is a weird one. In their constant attempts to find new ways to entice audiences to film festivals, in recent years we’ve seen all sorts of gimmicks. But a Swedish event, the forthcoming Goteborg Film Festival, has got a particularly novel approach; it’s going to entomb moviegoers.

The ‘sarcophagus screenings’ (‘sarcophagi screenings?’), in which eight volunteers at a time will be sealed inside custom caskets fitted with screens, speakers and (rather crucially) air vents, are supposedly “designed to enhance the bleak themes” of Swedish-language apocalyptic sci-fi film Aniara’s late-capitalism dystopian setting (which will be playing on said screens), according to the festival’s director Jonas Holmberg.

Aniara itself is based upon Swedish Nobel laureate Harry Martinson’s 1956 epic science-fiction poem, and follows the tale of a spaceship carrying hard-line consumerist passengers that is knocked off course whilst on its way to Mars, that supposedly serves as “a metaphor for Earth, that the future of our planet could be this kind of sarcophagus, floating alone through space as we use up our natural resources,” Holmberg said, “Our goal was to find a way to take the experience of the film, and the apocalypse, further. To take the sense of aloneness and claustrophobia and strengthen it.”

The feature was directed by Pella Kagerman and Hugo Lilja, who both worked alongside the festival to create the unique experience. Staff will supposedly be standing beside each of the coffins for the entirety of Aniara’s 106-minute runtime, and each of the tombs will have a large red panic button, should the experience become too claustrophobic (or if the movie turns out to be pants, either/or).

“It’s an experiment,” says Homberg. “At Goteborg we like to find new places and new ways to experience cinema. But we really have no idea how people will react.”