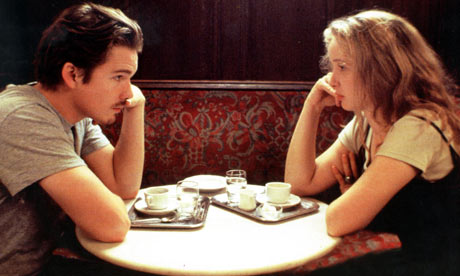 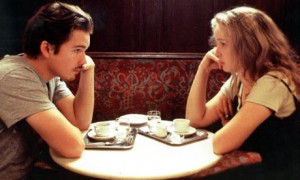 When you think trilogies, we often assume the respective instalments are ‘vessels’, boasting a healthy barrage of blockbusting spectacle with all their technical tapestry. Not an inquisitive couple whom provide their own spin on the conventions of the romantic genre at every turn, whether it’s through its mise-en-scene or their compelling conversations which defy their  improvisational nature, whilst emerging as one of the most critically-lauded series of films of recent years.

Sunrise. Sunset. Midnight. Sprawling across an 18 year period, Richard Linklater’s steady yet masterful direction of Ethan Hawke’s and Julie Delpy’s Jesse and Celine ‘love story’ at key junctures of their relationship began as perhaps a bygone ‘myth’ that feels out of place in a modern world, only for such cynicism to manifest and threaten the mere existence of their bond.

Let’s rewind to the hopeful time of Vienna. Those first ‘observational shots’ of Before Sunrise. The crisis unfolding between an argumentative German couple, juxtaposed with the contentment of an elderly couple. Only for the thrill of young love to swoop in and engulf the screen, with the aforementioned subtle signs of where life may take our much beloved pairing. The greasy hair and red-tinted beard of Jesse verbally tussling with a headstrong French feminist at heart in Celine, fully embracing of the spontaneity of spending one day together in such a soul-stirring eye-opening hotspot as they collectively dissect the big questions, whilst slyly trying to resist the clichés of a run-of-the-mill rom-com.

Their youthful selves determined to avoid the stereotyping of past generations, whether it’s the defining of a relationship or the tedium that often encapsulates many a career of various people. Their disregard for the gimmicks of say a palm reader or a writer, waxing lyrical about life and love (milkshakes and stardust?) yet almost initially blinded by the haze of their clear connection, in the realisation of how fantastical their meet-cute is. It’s typified by the self-knowing subversion of typical scenarios in the early infancies of a relationship.

The initial avoidance of a first kiss as the beauty of a musical piece intoxicates, only for a prolonged ‘pursuit’ on a Ferris wheel to end with a passionate embrace. The unlikely harpsichord providing the soundtrack as they dance in the street. They may healthily rebel against the romantic projections and ideals that so many relationships consistently suffer from as their deconstruction of man and woman defies the lazy sexist remarks, yet they reserve the option of their potential to resemble a fairytale. It’s this balancing act between reality and fantasy that Linklater manages so deftly, which makes the film all the more authentic and its protagonists so endearing, epitomised by a particular Celine quote. 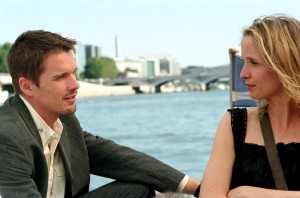 Burdened by the naïve promises of returning six months later to rekindle their ‘one day stand’, it’s suddenly nine years. The sun seemingly set on their hopes of reuniting. ‘Before Sunset’ shifts its focus away from the magic instead taking comfort in nostalgic notions and second chances, as Jesse’s now hotshot writer hits the road promoting his latest book, heavily influenced by that one day with Celine. Resigned to the foreground as he engages with fans of his work in the modesty of a Paris bookstore indulging in the concept of time, Celine awaits as we’re treated to snapshots of their previous encounter.

Immersed in a more immediate world, the film’s race against time plot device is terribly fitting along with how our on-screen lovers strike up conversation and lament the time separated from each other. The conveniences of Celine living in NYC for many years whilst unaware Jesse was nearby, coupled with the tragedy of her Grandmother passing away around the same time as the ill-fated December 16th meeting that never was. Whereas the balance was much about Linklater twisting the clichés in ‘Sunrise’, for ‘Sunset’ it is predominantly on the shoulders of the actual characters. Celine’s dilemma of being disturbed/flattered by their relationship being accentuated for fiction whilst not to complete offend Jesse. Whereas Jesse is consistently biding time using every means of transport around the city, with his current predicament back home slowly unravelling, initially unbeknown to Celine.

Disillusioned, as the film progresses the fear from both to seize the opportunity that’s presenting itself heightens. They playfully acknowledge the alternative, yet lament the failed realisation. ‘Memory’s a wonderful thing if you don’t have to deal with the past.’ The ride back to Celine’s apartment is the thread that the magic of their relationship hangs on, as Jesse’s emotional admission of being trapped in an unhappy marriage as Celine reaches out her hand to him only to pull away, the poignant visual aid.

Setting up the pitch-perfect ‘Waltz’ in her apartment. The sly name drop of Jesse in her song. A Nina Simone track conveniently titled ‘Just In Time’ as Celine imitates the figure movements of the singer. ‘Baby.. YOU are going to miss that plane.’ ‘I Know’. Unbeknown to audiences back in 2004, ‘Sunset’s finale mischievously keeps the possibility of a happy ending alive evolving into a film about recovery from the brink, refusing to be buried under the weight of one’s regrets whilst maintaining the qualities that encapsulated ‘Sunrise’. 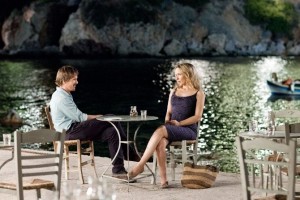 Acknowledging Greece as an aesthetically pleasing backdrop renowned for its years of myth and tragedy, 2013’s ‘Before Midnight’ is the bitter deconstruction of its predecessor’s dominating traits, as Linklater spikes the trilogy with an unsettling dose of reality. The sacrifices made to be together that were deemed necessary, are now manifesting into the ‘obstacles’ that are slowly driving Jesse and Celine apart as they grow frustrated with the workmanlike nature of their relationship. The joy of birthing two twin girls, juxtaposed with Jesse’s regular heartache of having to see his son Hank (Seamus Davey-Fitzpatrick) spend the Summer only to head back to Chicago.

Jesse and Celine at a crossroads. The former craving a move back to the US to be closer to his son. Celine mulling over a government job back in France and reluctant to abandon her homeland. Yet it’s their sudden disregard and cynicism towards their passions in life, that jars you as a viewer. The unbroken ‘shot’ where much of the dilemmas faced throughout are brought to attention, a prevention of their sleeping kids to have their eyes exposed to culture may seem harmless. Yet the cracks are undeniably starting to appear, with Celine’s ‘this is where it ends’ claim a blatant warning sign.

The thorough examination of each other’s personal issues in a desperate bid to understand, is only accentuated further in the company of fellow couples, in an exquisite dinner table sequence. Crossing various generations in its assembling, they’re frank in their assessment of relationships. Is the love affair that lasts a lifetime still a relevant concept in the modern world? With technology becoming more prominent, has the human condition grown too fond of ideals and specifics?

For all the witty exchanges, it’s the beautiful close courtesy of a woman named Natalia that sees the trilogy at its most raw. The sheer intimacy as she reminisces. The little details that we miss the most. ‘Like a sunrise.. Sunset. We appear and disappear. We are so important to some. But we are just.. Passing through.’ The stunned looks from all whom listen and for all their playful remarks, it’s almost as if they’ve been hit with the realisation that the ‘magic’ has been slowly dissipating, quickly rallying for a toast to save face. Are they in mourning?

Such inner confliction only fuels the confined spaces of its culminating ‘kind gesture’, the hotel room, a sequence which is both incisive in both shattering the oh so perfect illusion of their epic love and scathing in how both Jesse and Celine know exactly which ‘buttons to press’, in order to drive home the intelligence and logic of their argument. Lamenting the lack of attention paid now to a dream career, whilst degrading the worthiness of the other. The comedic/heart-wrenching twisting of words or corrections, to fit into their ideal and feel like they’re winning. The swept-under possibility of cheating in the past rearing its unforgiving head. It deftly captures the complexities of a long-term relationship, displaying a collective fear of being ‘institutionalised ‘ in a box that others created whilst declaring no other could be so forgiving of such flaws other than each other.

The pesky, fateful words of ‘I don’t think I love you anymore’ uttered. The climax of ‘Before Midnight’ intertwines the themes of its entire trilogy into one sequence. A telling line from ‘Before Sunrise’ suggesting we lose the ability to hear each other as we get older, driven home by their reluctance to engage. The sudden reliance on the gimmick of playing a time-traveller, mocking the superstition of a palm reader all those years ago and ‘bimbo’, attempting to recapture the fantasy of those formative years and the nostalgic quality which ‘Before Sunset’ embraced .

Yet the stinging reality that has tarnished their psyches, ends up unearthing (albeit ambiguously) the flawed beauty that their relationship can survive despite such hardships. Linklater feeding a crumb of optimism to its audience which they will happily eat up.  A cautionary tale brimming with wisdom that sees Jesse and Celine endure. Not the dream we revelled back in 1995. But is this the real victory?

I guess the answer is indeed.. In the attempt. 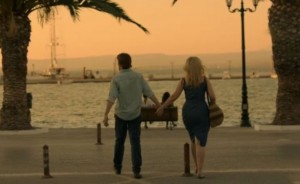