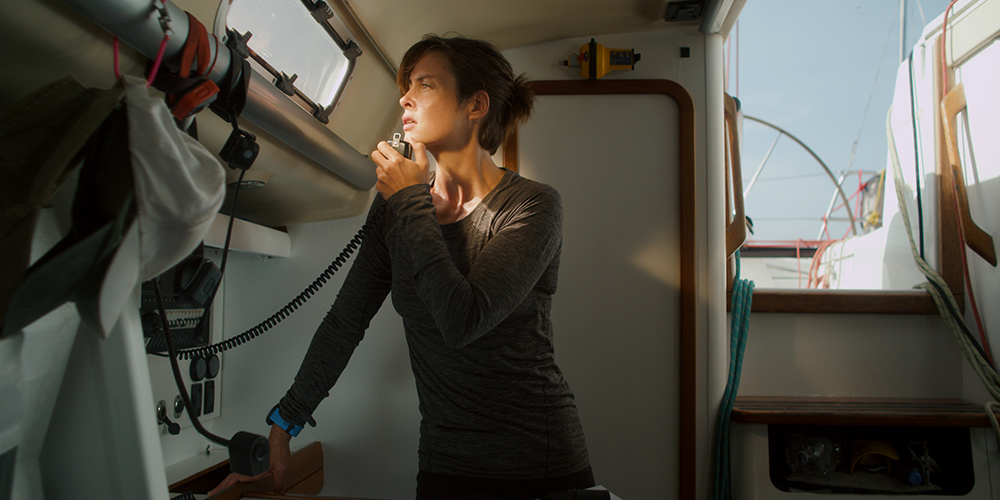 Styx opens treacherously.  Within the first minutes of its quiet, anodyne opening, there is a jolt. If this is mere indirect exposition and a couple of thousand miles away from the location of the film’s first major complication, it also shines a light on the ease with which the film’s central character, Rike, played by Susanne Wolff – incidentally an excellent sailor – initially handles the curveballs life throws at her.

A resolutely capable loner, she takes leave from her job as an A&E doctor to spend two weeks sailing from Gibraltar to Ascension Island. Her longing for faraway places might be a pretext for solitude. She is also an intellectually curious woman.  She wants to retrace Darwin’s footsteps, who visited the island and then encouraged a fellow explorer, a botanist, to green up what was then an almost barren island. The methodical Rike, who has packed her 11-metre yacht with only essential provisions, is seen poring longingly over a coffee table book showing an exuberant profusion of green plants and trees. The camera in turn looks longingly at the sailor, the boat and the sea, at the fluency with which Rike handles her craft, and at the ease with which she enjoys being all alone over a thousand miles away from land. It is both glorious, and unsettling.  High overhead long shots show the yacht as a tiny speck in an immense sea. 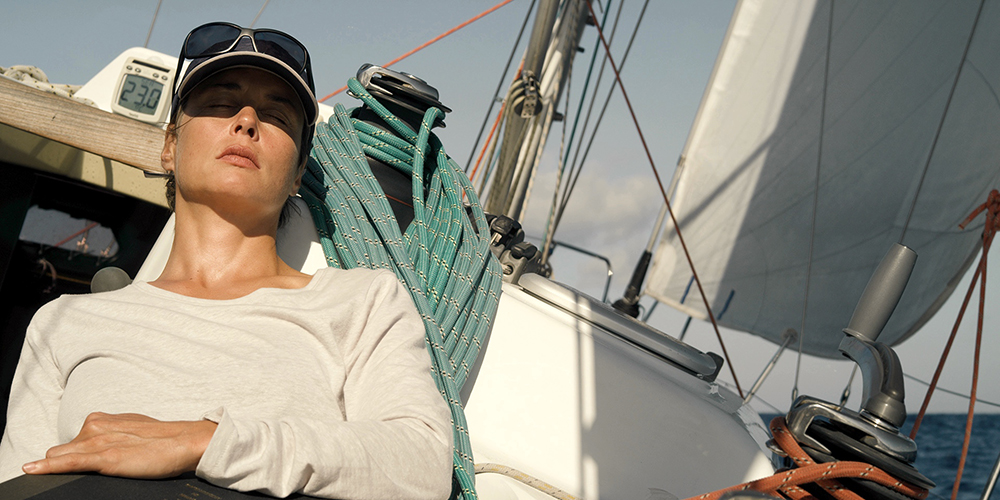 Styx is an elaborately crafted and exquisitely neat film, though its symmetry and metaphors provide perhaps signposts that are a little too obvious. Parallels abound. Even the name of Rike’s yacht is significant. Rike is sailing the Asa Gray – named after Asa Gray, another friend of Darwin’s and an eminent botanist with theories that perhaps have some bearing on Rike’s story. It is also a catchy name. As the yacht sails ever closer to the South Atlantic, the words Asa Gray ring out over the airwaves as Rike enjoys the odd chat with a passing cargo ship, and eventually, after a huge bone-shaking storm, increasingly tense exchanges with anonymous coastguards.

And this is where the neatness that underpins Rike’s life, whether saving patients in emergency rooms or navigating her craft as it is buffeted in high winds at sea, slowly starts to crack.  Her voluptuous solitude, interrupted by the storm, is invaded by the inevitable – a drifting boat packed with a hundred or more helpless people, too many to rescue by herself. The many voices that people her yacht cabin and respond to her distress calls with evasive promises – international coastguards, radio operators from passing ships – those erstwhile friendly voices are now cautiously distant. The loner, only truly alone in her fantasies of calm and immense empty landscapes, must now wake up and engage with a harrowingly messy reality. By the time she breaches through her strange torpor and breaks others’ rules in order to honour her own, something has irrevocably changed.

Styx is less about agonising dilemmas and more about one’s place in the world – about how illusory it is to think one can be a mere bystander in the face of tragedy. It is perhaps not harrowing enough, in that it maintains a stylistic elegance which is also translated into a distancing from what would otherwise be unbearably affecting.

Technically Styx is a feat. Shot in only 45 days, and almost entirely at sea – though the impressive storm sequence was shot in a massive water tank in Malta – the director and crew coexisted with actor Susanne Wolff on an 11-metre yacht, living and filming in a confined space and in all weathers, surrounded by ever changing sea and sky. Benedict Neuenfels’ cinematography, all crisp images and with infinite depth, embraces the physicality and rhythms of a life at sea, and a carefully designed sound track add a layer of reality to a story that starts almost impersonally, before hitting its audience with an affecting reminder of life at its extremes. This is a gripping film which cleverly asks questions, but does not impose answers.