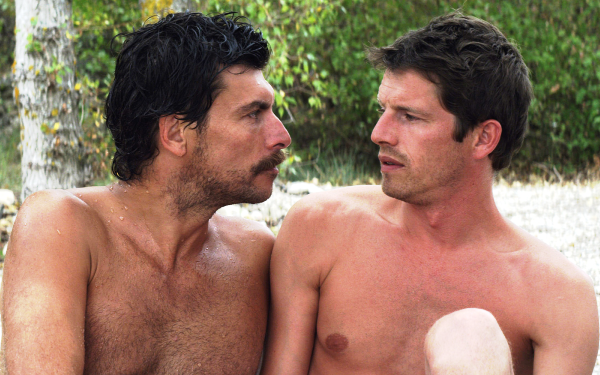 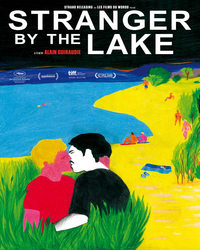 The mere craving for a remote sense of a feeling that is considered universal, yet set against a backdrop where its lusting visitors believe in the notion of anonymity. A secluded hideaway befitting of its protagonists’ meandering life direction, yet when an ‘easy on the eyes’ opportunity arises and attracts, just how much would you be willing to risk to seize it? Director Alain Guiraudie takes an often maligned genre in the form of the ‘erotic thriller’ to dissect what drives such a potentially fatal thought process and presents us with ‘Stranger By The Lake’, a fearlessly explicit snapshot of ‘gay cruising’.

Declared a popular ‘hotspot’ of the aforementioned in the South of France, regular Franck (Pierre Deladonchamps) may be revelling in the sun-kissed scenery but is longing for more than a quick quenching of his sexual desires. The sights range from the distant and harmless confidant Henri (Patrick D’Assumcao) juxtaposed with the candidness of their conversations, to the intrusive and depraved tendencies of Eric (Mathieu Vervisch).

The main attraction for Franck however, arrives in the form of the mysteriously handsome Michel (Christophe Paou), complete with an enviable moustache whom many have taken a shine to. Crossing ‘paths’ regularly whether it’s on land or in the water, the chemistry is palpable despite to Franck’s dismay, Michel being involved with another guy. Expecting a conventional love triangle to send ripples through the beach, it’s a chilling murder via drowning that prompts a thorough examination of the visitor’s motives, led by a steely-eyed investigator played by Jerome Chapatte.

Guiraudie directs proceedings with an unnervingly steady hand, matching the meditative pace in which the film exhibits. Whether it’s an effectively repetitious, regimented barrage of aerial shots as the characters arrive on the scene to drive home their implicit nature or the exquisite naturalistic stillness of a long-shot where we bare witness to the fateful act, he creates an atmosphere almost stifling in its Hitchcockian voyeurism and taut intimacy.

The film offers a skewered interpretation of being ‘blinded by love’, channelled through the understated brilliance of Deladonchamp’s performance as Franck. A certain degree of naivety in how he seeks his thrills, it’s the mere suggestion of him disregarding a life of a fellow member of the gay community in his undeterred bid to be loved, that serves as the ideal epitome of what such intense feelings can do to a human’s psyche. Serving as the enigmatic figure of the piece, Christophe Paou’s Michel is a pitch-perfect predator whom consistently unsettles as he draws Franck into his twisted world.

It may indulge in its bold, explicit sex sequences that occasionally veer into needless ‘shock tactics’, yet doesn’t diminish the animalistic charge or the emotional impact the film packs in abundance. Laced with ambiguity befitting of its title and boasting a ending that has little difficulty in haunting its audience, ‘Stranger By The Lake’ is both a gripping, intoxicating thriller and brave character study that dares to paint its ‘endorser’ as unflatteringly as its villain.

X-Men: Days of Future Past