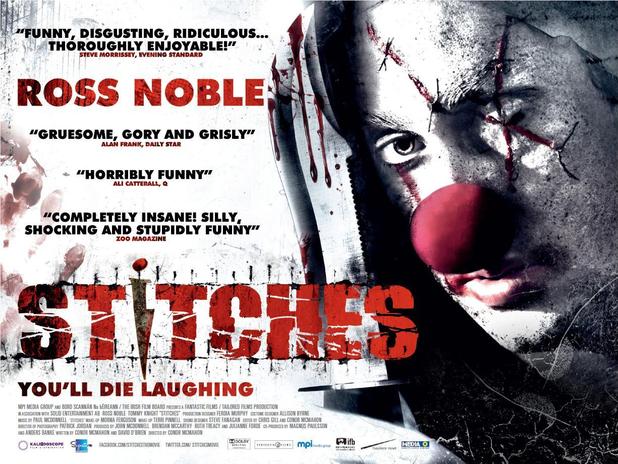 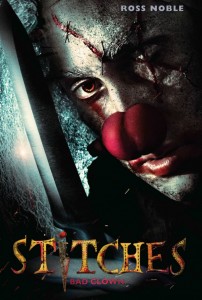 Clowns freak me out at the best of times, but the re-animated, bloodied and disfigured corpse of a tragically murdered one would probably paralyse me for the rest of my life. Luckily, director Conor McMahon (who previously directed short films with names like ‘Wanker’ and ‘Shaving The Baby’…) handles this exact subject matter with the kind of tongue-in-cheek glee that makes it far easier for those of us coulrophobically inclined to enjoy.

Stitches the Clown (Ross Noble) is a foul-mouthed, hooker-loving children’s entertainer, but his cosy life comes to an abrupt end when he attends the birthday party of Tom (Tommy Knight) and his friends, where an accident with an irresponsibly placed kitchen knife adds an unwanted side order of blood to the jelly and ice-cream. Six years later, Tom decides it’s about time he started celebrating his birthday’s again. Only problem is, Stitches gets an invite from beyond the grave, and returns to finish the party he started all those years earlier. As another clown tells young Tommy, a clown can never rest until he finishes the party, and the joke is never as funny the second time around…

With loveable geordie and professional surrealist comedian Ross Noble in the eponymous role of Stitches, you know before you hit play that you’re in for a treat. He effortlessly steals the show from the start, and essentially single-handedly rescues the film from it’s own cast.

Tommy Knight is awkward and wooden as the ‘hero’, sheepishly following his childhood sweetheart Gemma Leah-Deveraux as she broods her way through a ‘weird girl’ routine that never quite succeeds. Thommas Kane Byrnes (yes, it’s spelt right) plays perhaps the most interesting character of the group, due to him being not only fat (a fact that you’re never allowed to forget) but gay too. His weight and flamboyant homosexuality is quite literally played to death, and sometimes even approaches being funny.

Among the insufferable stereo-types and forgettable death-fodder, Stitches himself shines even brighter than he might have among a more well-established roster of victims. But that’s still not really any excuse – after all there’s no actual evidence to suggest that a well-written cast wouldn’t have complimented Noble’s performance, and probably would have went some way towards turning the large portion of the film where Noble is absent into something other than a tiresome slog through uninspired filler.

Despite it’s faults in the writing and casting department, however, Stitches has a lot to offer even hardcore genre fans when it comes to good old-fashioned violence. Fans of Ross Noble’s body of work (which consists of his uniquely whimsical and inventive stand-up) would be forgiven for underestimating the brutality with which he dispatches his victims. Hell, there were even moments when it genuinely caught me by surprise.

The only real problem with these kills is that there simply isn’t enough of them. Stitches runs amok at a pretty well-attended party, but only attacks the teens who were implicit in his original death. He insults and frightens a few other party-goers, but no more than a handful of lives are hilariously cut short, which is a shame when you consider the inventiveness of the deaths that do occur.

Aside from a bafflingly context-less scene where he murders a cat who wasn’t actually implicit in the murder he’s meant to be avenging, Noble had me laughing out of utter absurdity every time he appeared. The one-liners and the charming Geordie twang beneath each foul-mouthed utterance only helped put the icing on the cake for this entertaining and delightfully mad slasher movie. There’s a throbbing vein of slapstick coursing through the film, from the headteacher’s hilarious combover to the Clown cult’s chants of ‘Hee hee hee, ha ha ha’ as they march through a graveyard, that more than reminds of other daftly sinister works such as ‘The League of Gentleman’ and ‘Psychoville’.

It’s not going to blow you away by any sense, but even as someone with a hatred for Those With Squeaky Noses, i enjoyed every second Noble spent on screen and would be glad to see more of the character in future killing spree’s. This is a movie quite literally held together by Stitches, and I thoroughly recommend you give it a chance to entertain you.