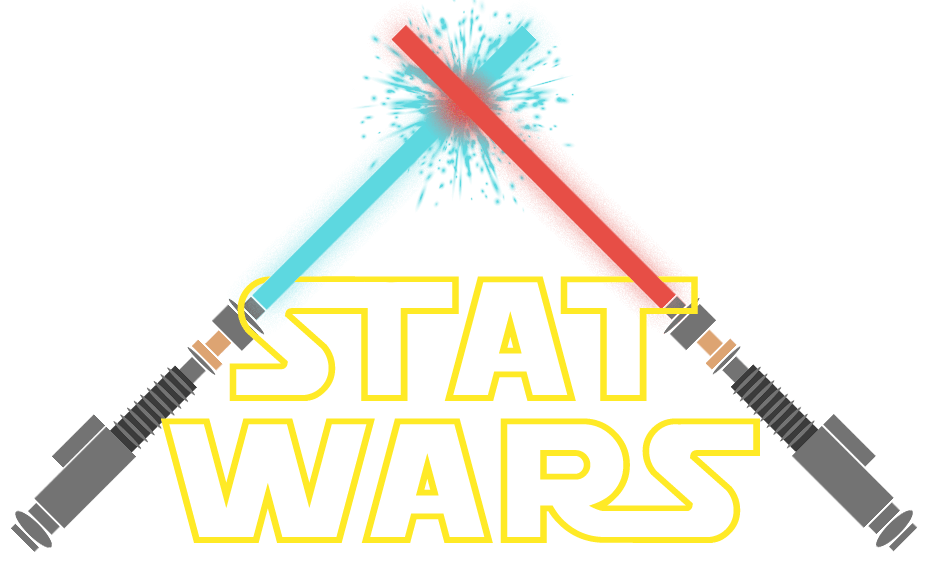 To celebrate the release of The Last Jedi this December, Magic Madhouse have created ‘Stat Wars’ – a exploration of the data behind the 7 main Star Wars movies highlighting how the movies relate to, and differ from, one another.

Ever wondered how often your favourite characters actually appear in the movies? Anakin/Vader takes up the top spot overall – with a whopping 161.30 minutes across the 7 movies, though surprisingly he only appears in the first movie, A New Hope – for 9.15 minutes. It goes to show how strong Vader is that a character with such minimal screen-time could have made such a huge impact – and it suggests maybe Lucas included more Vader when the character proved so iconic.

Stat Wars allows fans to explore an interactive chart showcasing how long the key characters – i.e. Obi Wan, Luke, Leia and C3PO – appeared in their respective movies. What’s most surprising is how little some of the main players showed up; Yoda appears for just 37.70 minutes across the 7 movies, and Chewbacca 47.30. R2D2 appears for 55.30 minutes.

Perhaps most interesting is the data highlighting the length of the lightsaber battles. For such a key element of the franchise, lightsaber battles are a very small part of the original films. A New Hope’s battle for example lasts under two minutes, – there’s only 6.41 minutes of lightsaber action in the original trilogy in total. Battles in the original trilogy were smaller, more emotional and focused on character growth. Compare this to the prequels, criticised for being all style and no substance, where the grand total of lightsaber battles reaches 17.95 minutes! The Force Awakens takes heavy inspiration from the earlier, less-criticised movies, and so its battles last a respectable 3.21 minutes.

And how often do characters mention ‘the force?’ The words are said a whopping 21 times in A New Hope which is perhaps the film where the Force is used the least. Surprisingly, for a film titled The Force Awakens, the force is only mentioned 5 times. Stat Wars also highlights how often the catchphrase ‘I’ve got a bad feeling about this’ is uttered, and by whom – with Han Solo saying the infamous words the most frequently.

Elsewhere, the opening crawl remains consistent across all 7 movies, averaging 80 words with the latest – The Force Awakens – being the most text heavy at 88, and Revenge of the Sith being the lightest at 75. There’s a clearly consistent approach when it comes to these openings.

Finally, we’ve compared financial stats, examining the total worldwide box office sales of each film. Coming out on top is the widely publicised and globally screened The Force Awakens making approximately $2.05 billion. Worth noting is the $786 million, that the A New Hope generated when it was released in 1977.

Mike Duke, Marketing Manager of Magic Madhouse said:
‘We’re big fans of the Star Wars movies at Magic Madhouse and that got us thinking, how do the films stack up when compared side by side? We got into a heated debate when it came to the prequels and the length of their lightsaber battles – some of us were happy the newer films included as much action as possible, whilst others preferred the more restrained style of the earlier films. Whilst the rest of the numbers proved a consistency across the movies, those battles really highlighted where things had changed.

‘I was surprised to see that Vader only appears in A New Hope for under 10 minutes, but I guess this can happen with these sort of films – I’ve heard there’s only 14 minutes of dinosaurs in Jurassic Park! Goes to show what an impact a good character can have.’