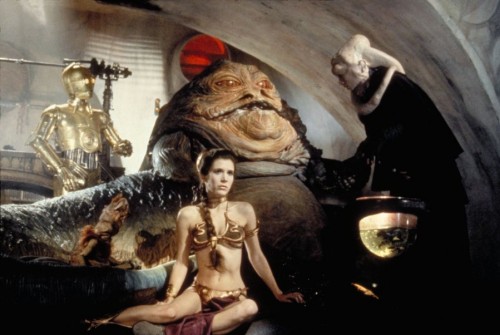 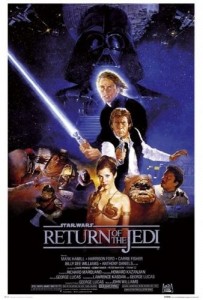 For many fans there is one thing that defines their liking of this film, those little, adorably furry creatures known as Ewoks. For many they’re a sign of everything bad about these films, an attempt to pander to children. They see their victory against the Empire as ridiculous, I’ve even seen it referred to as the point the franchise ’jumped the shark’. However, I find them incredibly cute and believe they perfectly sum up one of the key themes of the saga, which are really about the underdogs triumphing against impossible odds. Plus they’re just so damn cute!

Of course there is much more to the film than little fluffy teddy bears with spears, this is it the big close to the saga (you know before they decided to make episode VII) and things do definitely feel climatic. The Empire has constructed a new Death Star, but the rebels believe they can destroy this one before it is made fully operational, leading to an epic battle between the two forces. Meanwhile, Luke must face Darth Vader, can he redeem his father or will he too be turned to the dark side?

The idea of Luke going full Vader was never one that was too convincing to me but the film does do quite a good job of pushing the notion. When Luke first appears he is dressed all in black, the music evokes the Empire’s theme and he force chokes a guard. I forgot how impressively this sequence was shot, at first you could believe it was Vader walking into Jabba’s palace. Luke’s journey sees him compelled to face his father, not to kill him but to return him to the light side.

The scenes in Jabba’s Palace are a great way to kick off the film, slowing moving all the players into place before revealing Luke’s master plan. Jabba has been an ominous figure throughout the trilogy, and forgetting the poorly created CGI scene which was shoved into Episode IV this is his first appearance. From the start it’s easy to see why Han feared him, right down to that amazing laugh.

Luke’s fight with the rancor is one of the best scenes in the film, the creature looking incredibly life-like through the use of a puppet. The rancor is one of the better Star Wars monsters and is a truly terrifying creation. It really is a testament to the use of practical effects that this sequence holds up so well over 30 years later, you can’t say the same about some of the dodgy CGI that was overused in the 90s.

Speaking of dodgy CGI, Jabba’s Palace is unfortunately also home to one of the franchise’s worst sequences, and yes I am including the prequels in that. I am of course referring to the big dance number, which featured in the original film as a rather blues inspired song which already was hardly fantastic. For the 1997 ‘Special Edition’ George Lucas decided to replace this song with an odd pop song which is much longer as well as replacing the puppets previously used with computer generated aliens. As someone who saw this version of the film first this sequence will always drag the movie down for me, it basically stops the movie dead for a gratuitous dance song. It also represents a big flaw in Lucas’ strategy with the re-releases that carried over to the prequels, using CGI for the sake of it. In this case it definitely doesn’t improve the film, if anything lessening it.

The best moments of the film are definitely saved until the end when the Rebels clash with the Empire above Endor, as Luke faces his father on the Death Star. The space battle is still among one of my favourite sequences and is truly epic in scope, it truly feels like an all or nothing attack from the Rebels. I also love the pilot’s kamikaze assault on the Super Star Destroyer, Vader’s flagship. Luke vs Vader is a great fight scene, and while it doesn’t top their fight from Empire Strikes Back for me, it still has many great moments. I particularly like the glimpse we see into Luke’s rage when Vader threatens Leia.

One problem I have with the final fight between father and son is that I’ve never really been a big fan of the Emperor. I find him to be a bit too over the top while hammering the audience over the head with the big question of whether Luke will join the dark side. As I mentioned previously, that plot never felt particularly convincing so the Emperor’s constant goading is really a bit irritating. In particular I never really liked how the Emperor takes away from Vader’s menace. One of the greatest villains in movie history being little more than a lapdog at times. The sequence where he tortures Luke with lightning is probably one of the best visuals in the film however.

The fight scenes on the Endor’s surface are a bit more fantastical and your enjoyment of them will most likely come down to how you feel about the Ewoks, those resourceful little cuties. The use of nature as a weapon against the Empire is quite a strong one in my opinion, even while it makes the enemy look quite incompetent. You also get a tragic glimpse into the true cost of war, when one Ewok attempts to rouse his fallen friend, only to be brought to tears when he realises he’s dead. I can actually remember my genuine shock at first seeing that as a kid, it’s basically comparable to seeing your teddy bear die.