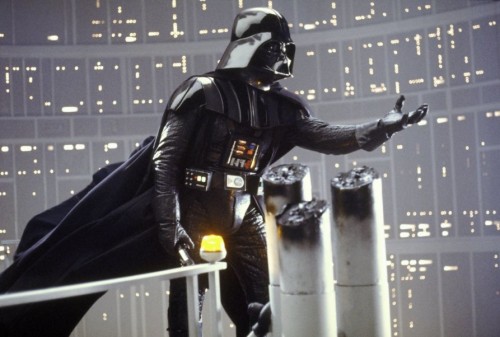 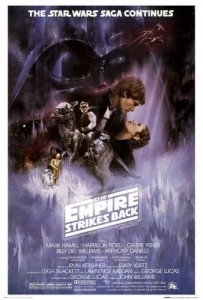 I’m going to get this out of the way quickly: this is easily my favourite film of all time. There’s no competition for it. That’s not to say it’s completely and utterly flawless, but I feel in love with it as a child and that love has never faded. I can basically blame this movie for my intense nerdiness. My exposure to it on a worn out VHS tape (recorded from Channel 5 no less) was my first real look at science fiction, and I was instantly hooked.

The film kicks off a few years after Episode IV, finding our heroes in hiding on the frozen planet of Hoth with the Empire more than a little pissed at the destruction of their favourite toy. When the Empire finds the Rebel base, leading to an awesome battle I’ll talk more about in a minute, Luke and friends are forced to go on the run again. Luke heads to Dagobah to be trained in the ways of the force by Yoda, a Jedi Master. Meanwhile Han, Leia and the rest take off in the Millennium Falcon, with Darth Vader hot on their tail.

The battle on Hoth is a masterful sequence, as the Rebels take on the looming AT-AT walkers in little snow-speeders against the beautiful snow covered landscape. The battle is so intense, it’s hard to believe that it was created all with miniature models and stop-motion animation. The use of grappling hooks to tie up the walkers legs is inspired, and something which I’ve found damn near impossible in every single Star Wars game based on the period.

Darth Vader is at his most imposing in this film partially because this is the the only film in the series where he doesn’t come across as someone’s henchman, first to Tarkin in the original and then the Emperor in Jedi. This is the Vader you don’t want to piss off. His idea of a performance review is force choking you in full view of your colleagues, hiring your replacement before your body has even gone cold. James Earl Jones’ voice is just perfect, giving the villain his endlessly iconic and terrifying demeanour.

The middle section of this film is carried best by the scenes of Han and Leia on the run as opposed to Luke’s training by Yoda. While Luke’s training has its moments and features a lot of classic lines, it’s very slow and is distinctly lacking in fun. This isn’t to say that Yoda isn’t a great character but in retrospect he does little more than give vague exposition and hint at the nature of the force.

The scenes with Han on the run are vastly more entertaining, mostly for the banter from the crew as well as the budding relationship between Han and Leia. Of course this is all threatened by the presence of the Empire and the bounty hunters they’ve hired, which of course introduces us to Boba Fett, possibly the most classic movie character with the least actual screen-time.

Yoda isn’t the only new character to be introduced, we also get to meet the smooth talking Lando Calrissian played incredibly well by Billy Dee Williams. He just oozes charisma every time he’s on screen and threatens to dethrone Han Solo as the most charming man in the galaxy.

When the gang are captured by the Empire, things ramp up considerably as Luke is forced to come to Cloud City and face Darth Vader, despite not being properly trained. His fight with Darth Vader is quite superb, as Luke barely holds his own against the imposing villain. Vader comes across as if he’s barely trying and yet completely dominates Luke. Then of course, there’s the great twist that came to define this film as the truth about Luke’s father is revealed.

Related Topics:ReviewThe Empire Strikes Back
Up Next