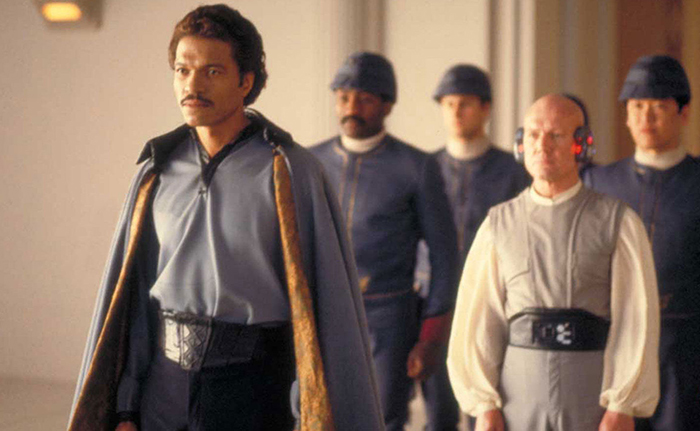 A blurry, leaked image of character profiles from director JJ Abrams’ highly-anticipated (and presently unnamed) Star Wars: Episode IX has given us a glimpse of Billy Dee Williams’ returning Lando Calrissian – as well as a host of new aliens and some intriguing story hints.

Williams’ Lando (O) seems, in a canny bit of synergistic brand management, to be donning an outfit similar to Donald Glover’s interpretation of the character in last year’s Solo: A Star Wars Story; yellow, with a black cape.

Furthermore, we can see Oscar Isaac’s Poe Dameron (K) kitted out in a more haphazard, adventurer-type outfit – suggesting the state of disarray the Resistance finds themselves in following the events of Rian Johnson’s Star Wars: The Last Jedi.

And finally, confirmation both that Adam Driver’s Kylo Ren (I & J) will be once-again donning his iconic helmet, and that Daisy Ridley’s Rey will wear an outfit (H) that will now visually, diametrically oppose his – bright white, to contrast his shadowy hue.

Star Wars: Episode IX is expected to release in UK cinemas on the 18th of December, this year.

The LEGO Movie 2 Falters At The Box Office