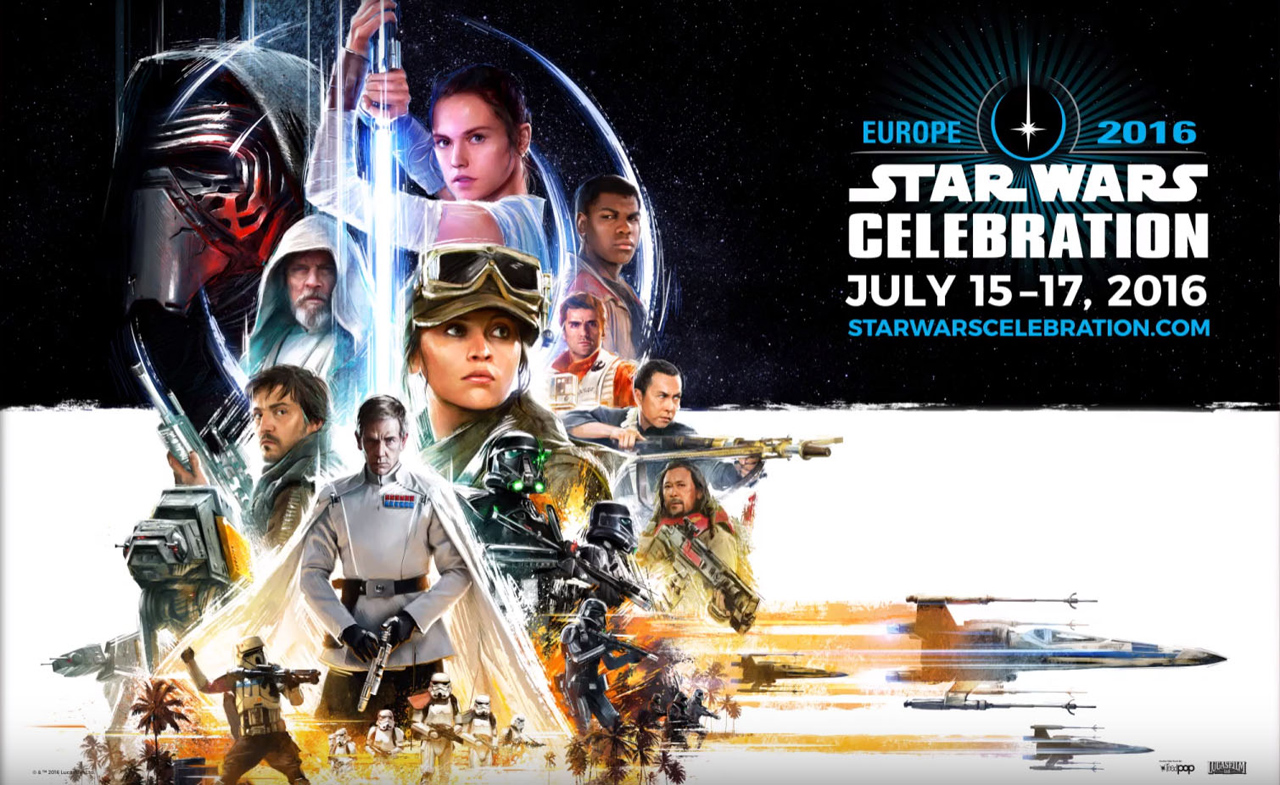 The Force was strong at the ExCel Exhibition Centre in London last weekend as Star Wars Celebration Europe 2016 offered three days of galactic action, epic reveals, high-end purchases and queues. Lots of queues. So many queues…

We were lucky enough to attend the flagship Lucasfilm extravaganza first-hand and reap the benefits of all the Star Wars goodness on offer which overall provided an extremely reassuring outlook on the future of the globally-adored franchise across all primary platforms. 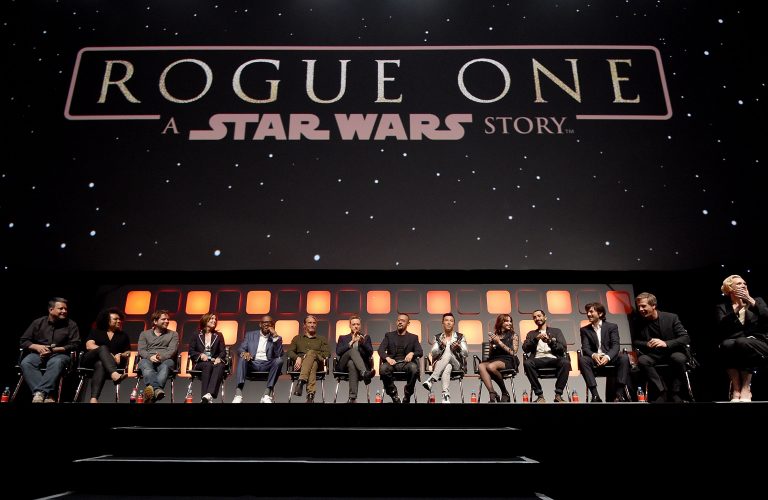 The biggest and most eagerly-anticipated panel of the opening day was of course for Rogue One: A Star Wars Story, but before the cast and crew of the latest movie appeared on the Celebration Stage, fans were treated to an hour with Luke Skywalker himself – Mr. Mark Hamill.

This writer sadly did not make it into the Hamill panel, but the words were positive, with may commenting on the legendary actor’s oddball humour as well as extended monologue of his animated villain The Joker who will next be seen in the most famous fable of the character’s lifetime – Batman: The Killing Joke.

The expansive audience were treated to a detailed Sizzle Reel (video above) showcasing a number of the filmmaking processes, detailing the authentic and muscular directorial decisions to really make this feel like an on-the-ground military movie, as well as seeing Jones’ face illuminate so brightly when she is presented with her Black Series action figure – the very first from the range and a must purchase on Force Friday later this year.

The panel wrapped with a brand-new trailer for the movie which is due for public release at the end of this week. Trust me when I say it is an absolutely masterclass of cinematic advertisement and ends on the most goosebump-enducing moment in recent memory. You are going to adore it.

The day concluded with a huge screening of A New Hope on the Celebration Stage. The Force Awakens played in the same time slot on the following day. 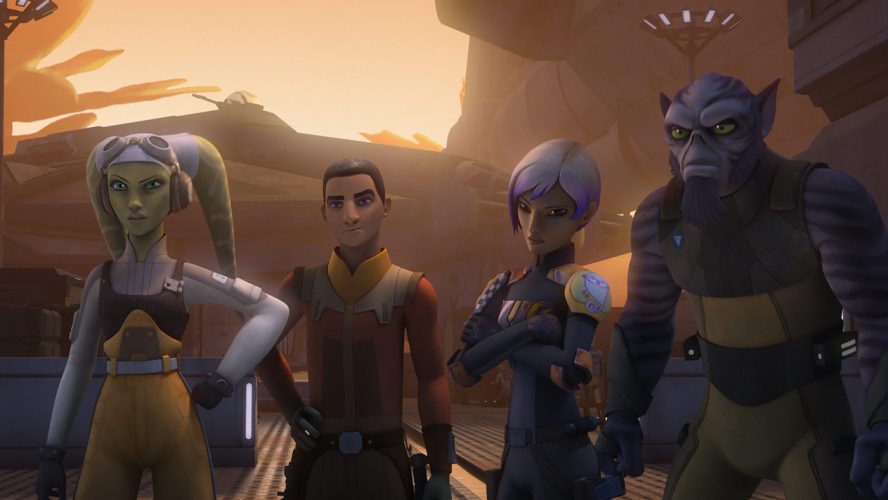 Things kicked up a gear on Saturday – particularly in the organisation departments which were, well, pretty poor on Friday. Everyone had found their bearings (both custom and staff) and the entire day flowed far smoother and sweeter because of it.

A variety of panels were in operation across the three core stages – Celebration Stage, Galaxy Stage and Behind the Scenes Stage – but the two biggest showcases were prepped for the leading arena.

First up was the Creatures, Droids and Aliens of The Force Awakens panel which saw Wicket the Ewok himself Warwick Davis host an array of artists, designers, animatronic engineers and more in an insightful retelling of how a wealth of the fascinating characters from J.J. Abrams’ movie came to fruition, and the processes of getting them onto screen.

It was a sheer pleasure to hear than Abrams wanted to feature as many practical effects as possible in the film, and only rely on CGI as a tool if no other form of design or technology were possible. This philosophy has too transpired to Edwards’ film and Rian Johnson’s Episode VIII which is apparently inspired by “old war movies”.

In this panel, we also got to meet “Space Monkey” (he currently is without a real name) from Rogue One who featured in the Sizzle Reel screened at the panel. This guy is pure Star Wars. The perfect creature who has some resemblance to Chewbacca so perhaps he is of Wookie origin. Who knows at this point, but he is very cool indeed.

As the afternoon arrived, so did the very best reveal of the day; in fact, it was one of the biggest highlights of the entirety of the weekend: the Star Wars Rebels Season 3 panel. For those of you who know this author personally, you’ll know I’m a massive Rebels fan, so this was eagerly-awaited anyway, but what we received was just majestic.

Executive Producer Dave Filoni (complete with trademark hat), and voice actors Tiya Sirdar (Sabine) and Sam Witwer (Darth Maul) were in attendance and sat down with Warwick Davis to chat about the future of the Disney XD series. Guests were treated to a number of awesome clips, as well as the brand-new trailer which left me slack-jawed. The sheer scale and visual design of Rebels continues to impress, and fans of the Star Wars EU are finally getting the villain they have longed for: Grand Admiral Thrawn. Yes, he is officially canon and will star in the show voiced by Lars Mikkelsen, as well as receive a brand-new self-titled novel by his creator Timothy Zahn.

The panel concluded with a special screening of the premiere episode of Rebels Season 3 “Step Into Shadows” which is a two-parter running lasting about 45 minutes. Thrawn features in the first episode, as well as brand new character situated firmly between the Light Side and the Dark Side, and he is voiced by none other than Tom Baker – the definitive Doctor Who for the masses.

It is safe to say that this episode is mind-blowingly great, and anyone in attendance who viewed and hasn’t previously watched the show will certainly be catching up with the first two seasons. The developments of Ezra are simply riveting, and to see his conflicted progression as a Jedi but with a teenage mindset hell-bent of seeking power could lead him down some dark, complex avenues. Rebels Season 3 doesn’t hit screens until late September, but trust me, the wait is worth it. 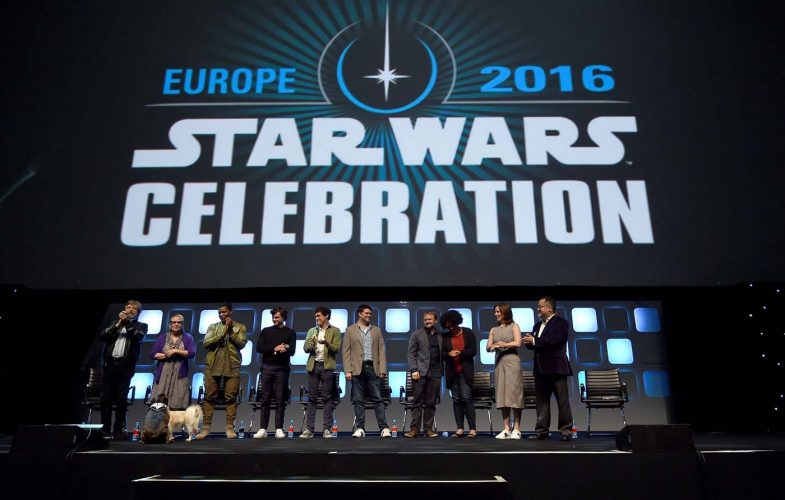 By now the early mornings, late nights and aches from waiting in lines are starting to take their toll, but there was still plenty to enjoy on the final day of Star Wars Celebration Europe 2016. Seriously though, my calves were killing. They felt like lead…

Princess, sorry, General Leia Oragna herself, Carrie Fisher, lead a discussion panel in the morning complete with her loyal dogs and even a reenactment of her scenes with Wicket from Return of the Jedi.

Unfortunately, one did not make it to this particular panel, nor the Closing Ceremony because of the convoluted wristband process which pretty much requires you to be in line from 6am to guarantee access to the panel later that day. Queuing and collecting a band at that time is tiring, but then waiting a further four hours before you can even step inside the convention is even more so. By Sunday, I needed a fraction more kip.

The Closing Ceremony and Future Filmmakers panel featured a variety of talent involved with the progression of Star Wars including Rian Johnson, and Phil Lord and Chris Miller who are helming the Han Solo spin-off project with Hail, Caesar! star Alden Ehrenreich. John Boyega (Finn), Mark Hamill, Carrie Fisher (plus dogs…) and Kathleen Kennedy also attended the roundup amongst others which provided a compelling and thoughtful think piece on what’s to come for the Star Wars cinematic universe.

One particular panel this writer did attend on the day however was the LEGO Star Wars: The Force Awakens hour which invited a series of Lucas Arts, TT Games and LEGO employees to the stage to discuss the transition of Abrams’ smash-hit feature film to the video game platform.

The panel documented the forthcoming DLC expansion packs for the game which includes a Legacy add-on complete with Boba Fett, Django Fett and more, as well as new levels featuring the new and increasingly popular Freemaker Adventures. There was also news from the EA Games group that those with Star Wars Battlefront can look forward to a Rogue One DLC in late November/early December to coincide with the December 16th theatrical release.

I personally used the final day as a last excuse to visit the many stands and stalls providing a wealth of amazing Star Wars merchandise, as well as taking a second trip around the glorious Rogue One props and costume exhibit which was open across the entire weekend. Safe to say that on this day, and all days really, much money was spent and many photos were snapped.

Overall Star Wars Celebration Europe 2016 was an incredible experience, and one of the most enjoyable events this writer has had the pleasure of attending for some time. The opening day was a little tainted by the sheer mania of it all and the lack of staff seeming to know what was going on and the protocols for particular requests, but all of these issues were ironed out with precision by the following morning. Suffice to say, Star Wars Celebration Orlando 2017 – which will primarily be promoting Episode VIII – is definitely on the cards. I better start looking for flights and accommodation…

My personal Star Wars Celebration Europe 2016 videos including a Weekend Vlog and Merchandise Haul are available to view on my YouTube channel The Midas Touch. Click here to subscribe.