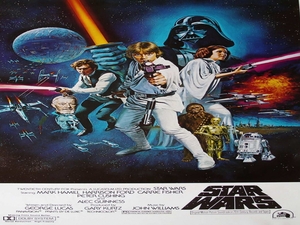 George Lucas’ Star Wars has often been described as the most original and most genre defining Sci-fi ever made. This being true, it has had a greater impact across the whole cinema industry than perhaps any other film in history.

A New Hope is set a long time ago, in a galaxy far away…Okay, so I will leave the cheesy references out as much as possible. The film follows a group of Rebels led by Luke Skywalker (Mark Hammill) as they attempt to rescue kidnapped Princess Leia (Carrie Fisher) Along with Jedi Knight, Obi-Wan Kenobi and the arrogant Han Solo (Harrison Ford) they take on the force of the Empire, led by Sith Lord, Darth Vader (James Earl-Jones/David Prowse).

This film began the saga that has gained an inconceivable amount of fame and an equally large number of fans. Created and Directed by George Lucas, everything from the film’s opening credits, to the ‘Cantina Band’ that have barely 20 seconds of screen time, these scenes are etched into movie history and its viewer’s memories forever. But why is this? A question asked so many times, there is no real answer. I believe that at its release, long before I stepped onto this mortal coil, it offered such an escape into the unknown. A whole universe had been created. Aliens and Space travel were big talking points in the 70’s, humanity had barely been into space 10 years and here was Star Wars, with a whole array of planets and space stations that boggled the mind of both adults and parents alike.

It also offered something for everyone, there was Romance, Action and most of all fantasy. It would be hard to find someone who didn’t enjoy Star Wars when they first viewed it. Its special effects were far ahead of its time and for this it was applauded by all. It begs the question that in this multi billion pound industry of film, would Star Wars fare as well if it were released today? The ‘prequel’ trilogy certainly put bums on seats, but this could easily be explained by the legacy of the original three. A New Hope may be overlooked as just another Sci-Fi in today’s climate.

The film itself contains numerous memorable scenes, the Lightsaber battles were brilliant, looking and sounding unlike anything you had heard or seen before. The scenes set in space involving the Millennium Falcon and the Death Star are equally entertaining.

Behind all the effects and battles, Star Wars is no more than a typical story of good and evil, something which we see time and time again. However in A New Hope, it is the way in which it is delivered which perhaps until Avatar, had never even come close to being matched. The original feel and spectacle of the movie outweighed any of the minor flaws it may have had.             As well as the visuals, we are able to enjoy the sounds of John Williams score, which to use a word happily bounced around these days, is epic. The mesmerizing soundtrack matched the impact of the film to perfection.

Almost 35 years since Star Wars. Perhaps its biggest irony is that most of its cast never even came close to enjoying a film success as big as this. With the exception of Harrison Ford of course, Indiana Jones, Blade Runner. Alec Guiness who played old Jedi knight, Ben Kenobi, was fantastic in his role and despite starring in films such as The Bridge on the River Kwai  and Lawrence of Arabia, never found anything that came close to emulating his role in Star Wars. Carrie Fisher’s biggest film since has been  When Harry Met Sally, in which she played neither Harry nor Sally. I appreciate Star Wars is a massive film to attempt to match let alone out-do. Though it is hard to understand the reasons why its cast has struggled since then.

This film alone has grossed nearly $1billion dollars world wide and having grown up with the series it’s hard not to feel a certain degree of love for A New Hope. While not my favourite of the original three, it’s still a fantastic piece of cinema. I feel that to justify my 8/10 rating I should perhaps list some flaws…The dialogue isn’t fantastic and the film has sections that could have been cut  out. These scenes show its age –the scene in which the group fall into a rubbish compactor is perhaps the films low point.

I will always be a fan of the original trilogy, while other critics will point out how George Lucas held onto all the merchandising rights etc and how his money-grabbing etc, etc ruins the film for them. A New Hope is still in most people’s minds a fantasy unlike any other. So to sum up with a cleverly worked quote:

‘This is a story of love and loss, fathers and sons, and the foresight to retain international merchandising rights. This is the story of Star Wars. Let’s begin with part four.’