Ever since news broke a few months ago that CBS were reviving Star Trek for the small screen, the place it really belongs, speculation has been intense about what era the show will be set in and just about everything else possibly related to a brand new Trek.

Showrunner Bryan Fuller announced the new show, along with a trailer that gives us our first look at the U.S.S Discovery (NCC-1031) and the design alone has Trek fans talking. Fuller explained the reason behind the new name,

“There are so many reasons why we settled on Discovery. But the chief one amongst them was that I couldn’t think of a more Star Trek-themed name for a ship than Discovery.”

Check out the trailer below.

While it keeps the familiar design of a circular main hull and two rear nacelle, the new triangular second hull is certainly different and is already dividing fans. However, the inspiration behind this new design is recognizable to a few that have studied Trek history, more importantly a project that was never actually produced.

The U.S.S Discovery has a striking resemblance to the redesign of the Enterprise done by legendary Star Wars artist Ralph McQuarrie in 1976. The design was intended to be used for a feature film titled Star Trek: Planet of the Titans. But it never went further than the script stage and a few glorious pieces of production art.

And here are a few screengrabs of the brand new U.S.S Discovery. 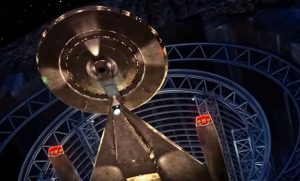 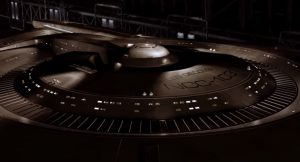 There’s more than a passing resemblance there. Why they have gone back to that specific design, no one is willing say at the moment, it is certainly interesting and not what anyone is expecting. We should hear a lot more about Discovery in the next few months including casting and which era, although it is thought to be set between The Original Series and The Next Generation.

With Beyond hitting cinemas this week, a fourth film already planned that will reunite Chris Pine’s Kirk with his deceased father George Kirk played by Chris Hemswoth, and now Discovery launching in 2017, it has become a very exciting time to be a Star Trek fan.

Star Trek Discovery launches in January 2017 on CBS All Access in the USA and on Netflix in the UK and the rest of the world.