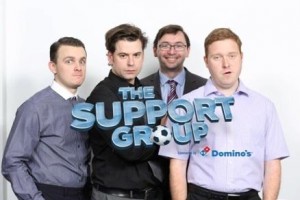 Domino’s has lifted the curtain on its exclusive brand-new online sitcom which incorporates recent weekly football events. Each episode follows football-fanatics and work colleagues Geoff,an Aston Villa fan, Spencer,a Chelsea fan, Ronnie, a Liverpool fan and Martin, a Manchester United fan. Each of whom refuse to hold back from insulting one another while the banter flies between them as they discuss the week’s football stories.

With 11 episodes on a weekly basis, this a comedy that surely cannot be missed and, as the episodes are usually around five minutes long, There is no need to miss out as you can watch them at home, on the move or even in your place of work! New episodes will be available online every Thursday lunchtime and will be until the end of the European and Domestic football seasons.

Our sponsor, Domino’s was founded in 1960 has become one of the world leaders in pizza delivery brands, with over 10,000 franchised Domino’s stores in 75 countries worldwide. Domino’s prides itself on it’s focus ‘the home delivery of pizza, freshly made to order with high quality ingredients.

For us, The Support Group is a genuinely funny and down-to-earth sitcom. Certainly a must for football fans, it’s accessible comedy style and characters are easy to relate to, while it’s short episodes allow for easy watching.

The Good, the Bad and the Ugly