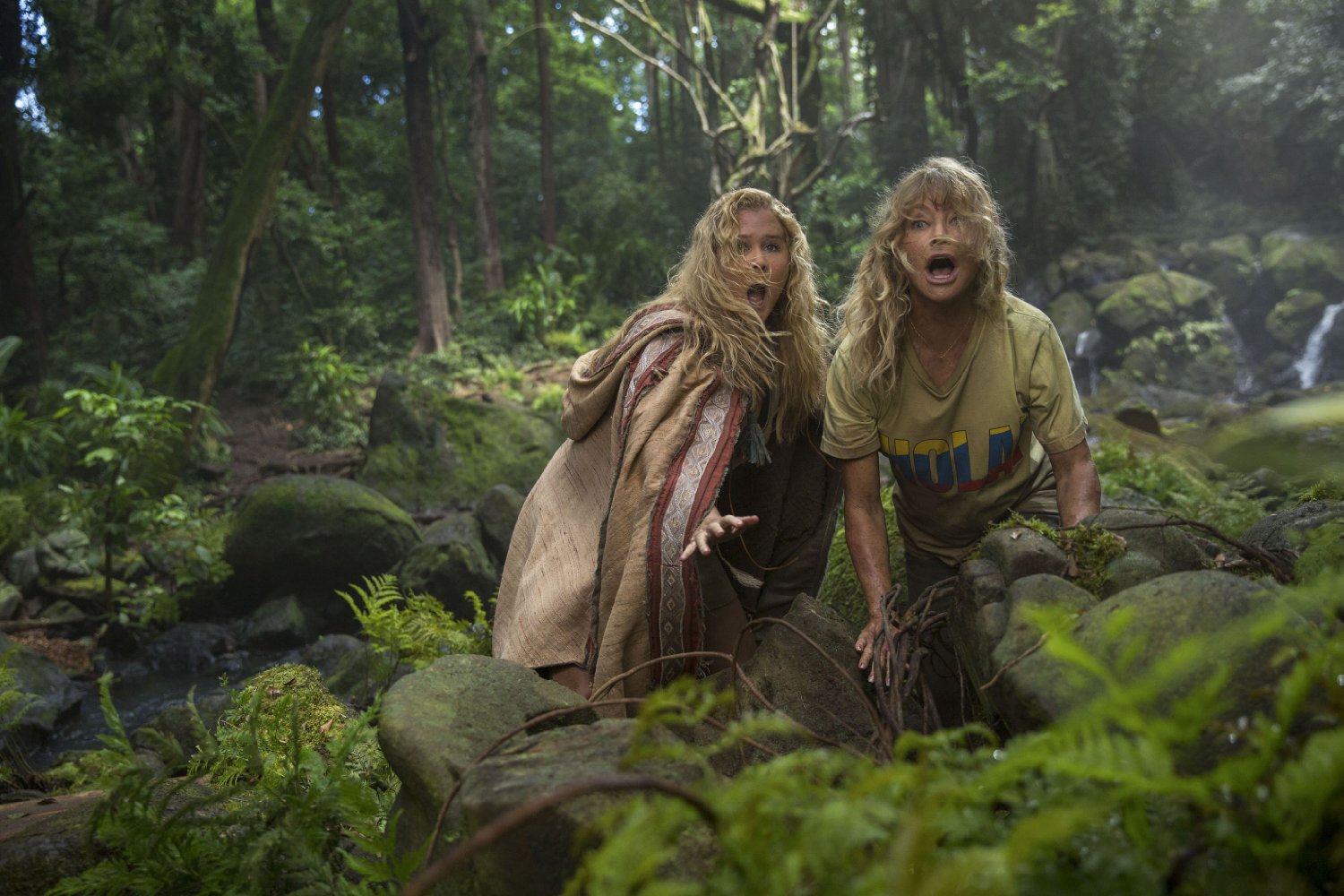 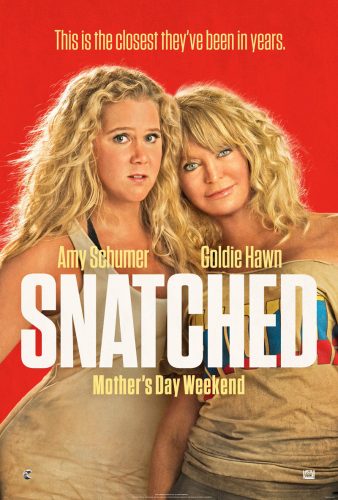 If Snatched is what you expect it to be is that necessarily a good thing? Probably not, but if it’s better than you expected does that make it a good movie or, just, not a terrible one? It’s a tough line to walk and an even more difficult one to decipher, but at the end of the day it can’t help but to feel as if Snatched, overall, is more of a missed opportunity than a success by the standards of its genre tropes. Missed opportunity due to the fact that not only was it written by a single screenwriter in Katie Dippold (The Heat, Ghostbusters) and directed by Jonathan Levine (50/50, Warm Bodies), but that it also stars one of the world’s most popular stand-up comedians (like it or not) while being able to pull seventy-one year old Goldie Hawn out of a fifteen year semi-retirement. If one is able to rope in a comedic legend like Hawn for your project one might imagine that individual or team would utilize her and her talents to their greatest effect, but in Snatched it seems Levine and everyone around him were afraid to ask Hawn to do anything too uncomfortable and instead kept her tasks in as safe and as easy a box as possible. This only stands to resort the movie to Hawn playing an overly-cautious mother figure while Amy Schumer is the irresponsible, narcissist of a daughter that exemplifies every negative stereotype one could come up with about millennials and then throws them into a hostage situation where balance in the two competing personalities is supposed to be found. Alas, that is what the movie goes for, but none of it ever feels natural or authentic, but rather very much like a movie. Everything about Snatched is very movie-like and while that isn’t always a bad thing, especially when as much is intentional, this technique only bodes well for Snatched part of the time and most of that time is when the film is actually being funny. In short, when the film owns up to its promise and delivers on the capabilities of its talented cast and creative teams, but more often than not Snatched feels like a given of a movie where, after it was decided Schumer and Hawn would play a bickering mother/daughter pair, the rest was left up to that chemistry to make the ship sail successfully. Schumer and Hawn more anchor the film than anything though; holding the antics steady despite the fact the ship itself hasn’t been that well-constructed.

Schumer, who is thirty-five, plays Emily Middleton who, at the beginning of the film, is working at a trendy clothing department store, but finds more time for shopping for herself and telling customers her own troubles than assisting them in their own needs. She is quickly fired and then subsequently dumped by her boyfriend Michael (Randall Park) whose band is beginning to take off and who doesn’t want Emily holding him back. The split is only made more painful by the fact Emily and Michael were supposed to be taking a non-refundable vacation to Ecuador together and now Emily must quickly find a replacement partner. In one of the few genuine and effortlessly funny moments in the film featuring the leads Emily solicits friends and acquaintances on social media to come on vacation with her, but finds no takers. In something of a slump she updates her relationship status which is seen by her mother, Hawn’s Linda, at her picturesque suburbia home outside the city where she begins commenting on the change of status completely unaware that what she is saying is public and available for everyone the two of them are friends with to read. Linda begs her daughter to come see her in the wake of her sadness which Emily begrudgingly agrees to. Once back in the comfort of her childhood home, along with her agoraphobic brother Jeffrey (Ike Barinholtz), Emily finds a photo album of her mother in her younger days that stirs something in her giving her the idea to invite the reluctant Linda on the trip. As these things go, Linda agrees but only because it seems the only way she might actually spend time with her saughter. Once in Ecuador Emily goes her way of reckless abandon, of drinking with strange men, and sun bathing without sun block. Her mother warns her, as do fellow travelers Ruth (Wanda Sykes) and Barb (Joan Cusack), of the potential dangers, but Emily doesn’t listen-even when a smooth talking, adventure-seeking charmer like James (Tom Bateman) comes on to her at the bar and suggests he take Emily and her mother for a drive to the most scenic spots in the area. Emily essentially forces her mother along for the ride where they are kidnapped by the likes of Morgado (Oscar Jaenada) whose objective isn’t ever clear, but that we can surmise isn’t overly pleasant which, of course, then forces Linda and Emily to put aside their differences and work together.

See, and while there is plenty to complain about Snatched isn’t necessarily a bad movie as much as it is an average one-a generic one. It offers characters and character arcs that we’ve seen countless times before and sometimes executes them in ways that are humorous enough to sustain the film while other times making connections from scene to scene that have zero natural progression in them at all. What is somewhat awkward about reviewing Snatched is very much the same type of awkwardness that came up when discussing last summer’s Ghostbusters as both films are intended to be these empowering pieces of female independence that demonstrate women are equal to men and can do and deserve the same type of recognition and reward as their male counterparts which is all well and good and I have no issue with except for the fact that Barinholtz and Bashir Salahuddin as a State Department official have fifteen minutes worth of a subplot that is funnier than the entirety of the rest of the movie. This aligns with Ghostbusters in that, despite the fact Melissa McCarthy, Kristen Wiig, Kate McKinnon, and Leslie Jones are hilariously funny women, Chris Hemsworth clearly stole that show. The back and forth between Barinholtz and Salahuddin, who is very much the MVP of this movie, is laugh out loud stuff and it all comes back to the fact it feels effortless. Both of these supporting characters are very much defined by a single trait and that trait-no doubt ingrained in the screenplay-informs everything else about the character and the decisions they ultimately make. The movie is supposed to be about Schumer’s Emily maturing and coming to certain realizations about how flawed her personality and outlook are on life, but whereas Schumer’s character abruptly changes from one scene to the next (there are hints, sure, but it’s still a fairly jolting tonal shift in the middle of the film) Barinholtz’s Jeffrey actually progresses from a scared and rather naive adult who has been overly sheltered due to his mother’s cautious ways (which were seemingly brought on by an unexpected divorce that the movie brings up once and then never mentions again) to someone who forced himself to face his fears and not only go outside, but to be resilient in his effort to save his mother and sister. It doesn’t hurt that the main hurdle he has to deal with is Salahuddin’s Morgan Russell whose no nonsense, rule-following mentality gives way to killer line deliveries and a character we feel like we know the moment Salahuddin opens his mouth. Content and story matter just as much as natural chemistry for one needs a strong facility in which to build the other.

That last paragraph would seemingly mean to bring down a lot of the weaker aspects of Snatched down upon Dippold who, as the sole credited screenwriter, should and shouldn’t bear the weight of the responsibility. Given the current climate of Hollywood where studios and producers find it necessary to stick a team of writers on any one given project it is something of a rarity to see a big(ger) budget summer offering (and a comedy at that) come from a single source. That Dippold isn’t able to provide a more sound structure for her charismatic stars to stand on is disappointing in that there are certainly moments in Snatched that seem to aspire to be about something more, not to mention funnier. Still, the script is unable to follow through on either of these aspects makes many of the films shortcomings Dippold’s cross to bear. For example, there is a scene in which Morgado threatens Linda and Emily and expresses his anger and disgust with Americans who can come to these large, extravagant resorts for vacation while just outside the gates people are living in poverty. Interesting motivation, right? Unfortunately, beyond this single line of dialogue nothing is made of his plan for vengeance other than being a typical foreign bad guy and clear threat to the white protagonists. Even Jeffrey and Morgan’s whole previously discussed subplot somewhat hints at the expected privilege of Americans in that we want to be free to travel and see the world, but the moment anything goes sideways we expect the government to put forth all necessary resources to aid us. While such notions are touched upon and ever so slightly lampooned none of it ever goes anywhere or is utilized to make some bigger, more substantial statement. Not that all comedies have to be striving for satire or more cutting/darker forms of the art, but nonetheless comedy is meant to be funny and Snatched just isn’t consistently funny enough to forgive all the opportunities it misses with such a cast and creative team behind it. Also, it probably doesn’t help that besides Barinholtz and Salahuddin the next best performance is that of Christopher Meloni who is the only person that actually seems to understand he’s in a movie that is very much of the world of movies. Granted, he’s playing a guy who is playing the role of an explorer as defined by what he’s seen in the movies, but the point is it is a glimpse such as this-true cleverness-that make trying to be funny worth striving for because we all know being genuinely funny is genuinely hard. It is only after Meloni that we have Sykes being Sykes and Cusack turning in a non-speaking performance that garners a few laughs whenever she’s given the opportunity to be on screen, but while Schumer and Hawn keep this thing afloat off the backs of their most basic charms it is almost criminal how much their talents are wasted here.

King Arthur: Legend of the Sword