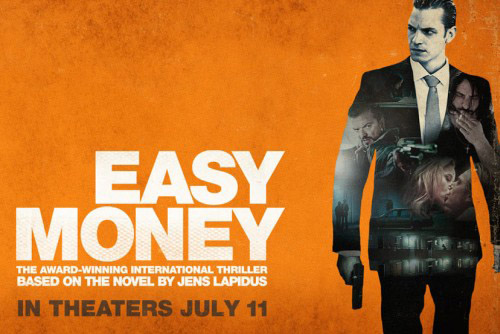 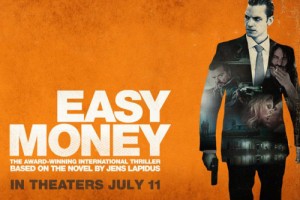 Since the Danish directors Lars Von Trier and Thomas Vinterberg founded the avant-garde movement known as Dogme 95, Scandinavian cinema has went from strength to strength. The ‘back-to basics’ rules and regulations of the group helped make a name for Denmark in the industry, and it wasn’t long before neighbouring countries got in on the act. Best selling authors such as Sweden’s Stieg Larsson and Norway’s Jo Nesbo are proof of the raw, and beautifully dark storytelling coming out of the area in recent years. Their novels have inevitably spawned successful films, most notably Larsson’s Millennium trilogy, the first instalment of which has even had a US remake starring Daniel Craig and Rooney Mara. Also getting the Hollywood treatment, with Zac Efron in the lead role, is 2010 Swedish crime thriller ‘Snabba Cash’, which translates in English as ‘Easy Money’. Due to the thumbs up from the late Roger Ebert, and the team up between the Weinstein Company and fan Martin Scorsese, the picture finally has a US/UK general release, in July 2013. Directed by Daniel Espinosa, the plot follows three men in Stockholm’s criminal underworld whose paths cross, with lasting consequences for all involved.

All three of the principal characters have relatively honest motives for their very questionable actions, creating empathy for each and when they clash, it is difficult to choose between them, which makes the journey so compelling and thought provoking. Johan (Joel Kinnaman) is a young and enthusiastic economics student, who funds his education by driving taxis illegally for local drug baron Abdulkarim. Jorge (Matias Padin Varela) is an escaped prisoner from Chile, trying to make amends with his pregnant sister. Mrado (Dragomir Mrsic) is a veteran heavy working for ruthless Yugoslavian crime boss Radovan, but wants to leave his past behind after getting custody of his eight year old daughter Lovisa. The arcs of the protagonists intertwine brilliantly as Johan, or JW as he is known to his friends, agrees to put up fugitive Jorge in his student accommodation after he is brutally beaten by henchman Mrado, and is then lured into a drug trafficking scheme using an investment bank as a front for their dodgy dealings.

Marketed with the stand out ‘Martin Scorsese Presents…’ on the posters, it is easy to draw comparisons between this and the iconic crime epics of the New Yorker. The use of music is similarly effective, a blasting score at the forefront at the height of the moral dilemmas of the central figures. JW, Jorge and Mrado all arguably have attributes of classic Scorsese male leads, especially Johan, with his polished exterior disguising an inner trauma, a Marty trademark through the years with his frequently used stars such as Robert De Niro and Leonardo Dicaprio.

In the beginning, JW is as smooth as they come, his dapper suits and slick hairdo oozing confidence, but as the reality of his behaviour sinks in, his moral compass spins out of control. His golden locks almost act as a visual metaphor for his state of mind as the story progresses, becoming more and more of a mess as he gets deeper into trouble, trying to push it back out of his eyes to maintain his cool, putting strain on his relationship with Sophie, a stunning blonde whom he charms at a party catered for the rich and fabulous, whilst blagging a ‘Stekare’ existence, which in Swedish parlance means a lifestyle flaunting one’s apparent wealth. Mrado is the character I sympathised with most, his double life between doting father and frightening hard man is great to watch, and he genuinely wants to turn over a new leaf to make a new life for his adorable little girl. The on screen relationship between the two is well acted and at times touching. Jorge is the loose cannon of the trio, his sense of loyalty is continuously flimsy, keeping us guessing which side he is on. In a gripping finale, rife with double crossings, their lives collide again, having a massive impact on the future of them all.

After its impressive run at Berlin Film Festival in 2010, it has quickly developed into a franchise, Snabba Cash II and III already released in Sweden. This deserves to be seen all over the globe, and I fear the Efron remake might not pack the authentic punch of this hard hitting original. A story which is equal in its human element and its gangster flair, it is a rare treat with cracking performances all round, particularly from Kinnaman who is set to star in the Robocop remake, as well as Espinosa’s latest project Child 44 alongside Tom Hardy and Gary Oldman. ‘Snabba Cash’ refuses to fall into the well worn clichés of the genre and serves as another impressive piece in the ever increasing catalogue of Scandinavian cinema.