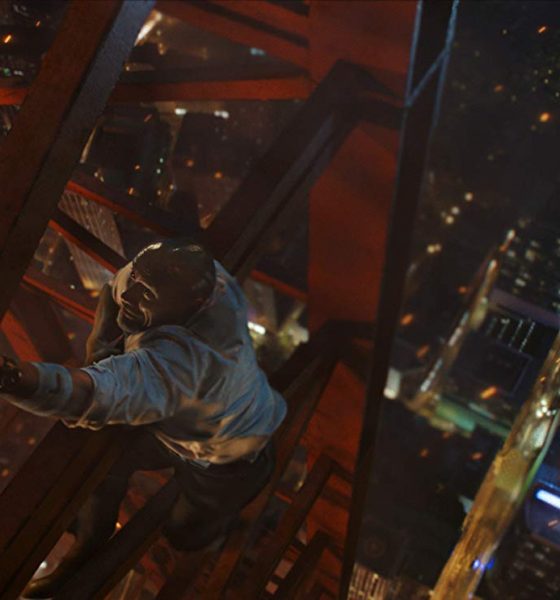 Be honest. Sooner or later, you knew The Rock was going to make Die Hard. It was inevitable. As he ascends higher and higher thought the upper echelons of the – increasingly spartan – Hollywood star system, this was always going to be coming. The only question really, was going to be whether or not it was going to be either any good, or even welcome in a world in which even a bonafide Die Hardsequel now typically ranks among the worst of whichever year it’s released in.

Alas, Dwayne Johnson is no Bruce Willis, and that quality control barrier could not be any clearer as Die Hard meets The Towering Inferno – with a dash of The Fugitive – for Skyscraper. Rawson Marshall Thurber’s adrenaline-fuelled ride takes DJ to China as amputee and former FBI tactical agent Will Sawyer, an American tasked with signing off on the security of The Pearl – the tallest building in the world. When terrorists seize The Pearl, however, Sawyer finds himself the subject of a Chinese manhunt and forced to find a way back into the building in order to save his wife and children from not only the terrorists seeking to fulfil their own agenda, but also to the out-of-control blaze that threatens to consume them all.

Johnson’s played in the sort of arena on more than a few occasions now, with Skyscraper arguably skewing closest to San Andreas as regards the sort of tone and polished spectacle you’re in for. There are some offhand nods to more classical genre archetypes – hell, it makes more Die Hard references than Jake Peralta – and there’s the requisite degree of fistbumping and utilisation of the term “brother”, but those still unsure of what to expect can rest easy on the promise of what’s essentially an Irwin Allen movie with a Neal Moritz sensibility. It ain’t clever, it doesn’t want to be, it just wants you to sit on the edge of your seat and then cheer afterwards. Which you will. A lot.

Neve Campbell brings an impressive amount to what’s an already impressively sketched out female supporting character in Sawyer’s wife (take notes, Bedelia – that’s how you handle hostage takers), and Pablo Schreiber (Orange is the New Black) continues to make for an engaging added value element. Roland Møller, meanwhile, makes for a decent enough villain, but lacks the charisma needed to really sell the ludicrously named Kores Botha as much of an evil mastermind. Sure, he was never going to rival Hans Gruber on the scale of action movie villains, but Botha’s so thinly devised as a villain that he’s not up to the grade of Tommy Lee Jones’ Under Siege villain either. And that’s a real detriment when your action hero lead is someone as genuinely charismatic as Dwayne Johnson. Both Jeffrey Dean Morgan and Joe Manganiello took the wrong Rock movie, would be a decent takeaway.

In lieu of a captivating villain, Thurber nonetheless ensures value for money is had with a barrage of spectacle-fuelled set-pieces the likes of which will have you squirming in your seat biting your fist for dear life – IMAX could well inspire a sense of vertigo with this one. It’s a glossy-looking actioner – thanks to some smooth production design and slick visuals from cinematographer and Mission: Impossible alum Robert Elswit – and fight choreographer Allan Poppleton goes above and beyond to stage Johnson’s antics not as the all-powerful action commando, but a credible fighter dwarfed by the spectacle of what’s up against him.

It’s a good time for all. Sure, it’s in no way destined to become an enduring classic of the action genre – though, the spoilerific marketing campaign does well and truly show off what will become one of this summer’s more memorable movie moments – but it’s Die Hard on fire. With The Rock. In 2018. And if there’s an easier sell for a good time at the movies than that, it just means Dwayne Johnson has another movie out. In which case, still see Skyscraper first.