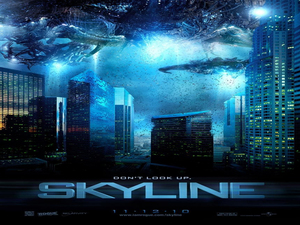 Skyline was heavily advertised to be the “Independence Day of the 21st Century” but fails to be anything more than a SciFi (SyFy now, anyway) Channel movie on the big screen… gone wrong.

The movie premise begins with couple Jarrod and Elaine (Eric Balfour and Scottie Thompson respectively) arriving in LA to celebrate Jarrod’s best friend Terry’s (Donald Faison) birthday party. Soon enough, we start to see strange events occurring, most notably people being abducted once they look into a mysterious light. It’s up to Jarrod, Elaine, Terry, Candice (Brittany Daniel) and Denise (Crystal Reed) to try to manoeuvre their way to safety before they too are taken.

There were a lot of factors present which made the overall film quite mediocre, most notably the plot and story development. When I first heard the premise of Skyline, it did interest me because it included a story of alien abduction and a world invasion; I like the way how previous films like Alien and District 9 dealt with their stories on the topic of aliens. However, when I ended up watching Skyline it had created more questions than answers and, in this case, was not a good thing. For example, the film takes place over 2½ days but the alien’s story/purpose for invasion was not explained at all during the film, the army are barely shown to do anything and causes a detrimental effect while watching Skyline throughout. At points in the film, it just felt like they were brainstorming ideas to fill time since there was nothing interesting happening with the characters. An example of this would be slow motion shots or a fast motion shot that is quite long that I believe that weren’t necessary or quite annoying to wait for and watch. I believe that this time could have been used to delve more into the story. The ending left me upset at the fact that it ended so quickly, so ugly and at a point when it started to peak my interest.

When it came to the characters, I don’t feel that the actors stood out that much when it was needed. Due to this, plus the lack of the character’s stories from the beginning, makes me struggle to care about them or what happens to them during the film. Eric Balfour and Scottie Thompson struggle to be interesting as lead characters since there is not much material they are given to start with. Supporting characters such as Donald Faison (Turk from Scrubs) also fail to give any interest towards the audience and might as well be used as on-stage props. At parts of “Skyline” where the scene should be tense, it unintentionally turns humorous, such as Balfour’s mega-jaw scream and the numerous attempts they fail to escape to safety during the movie.

The only point that I feel redeems the movie are the visual effects; on a budget of $10 – $20 million, I wasn’t expecting a big, polished final piece for the alien invasion but I quite impressed with the end result. I liked the designs of the aliens and the concept of looking at the light to obtain the victims. However, with the lack in story I feel it could have been put to more use in the film.

The Strause Brothers direct Skyline but need to learn to put more in the story or not bother at all; this is evident in their poorly received “Aliens Vs. Predator: Requiem”, which suffered some of the same problems that “Skyline” also does.

With a disappointing lack in story development, generic acting leading to boring characters and a borderline insulting ending, Skyline fails to deliver and falls prey to being remembered as a sub-par piece of cinematic entertainment… that’s if it’s ever remembered. The only grace that can be picked up from Skyline is to watch it with friends so you have someone else to mock it with.