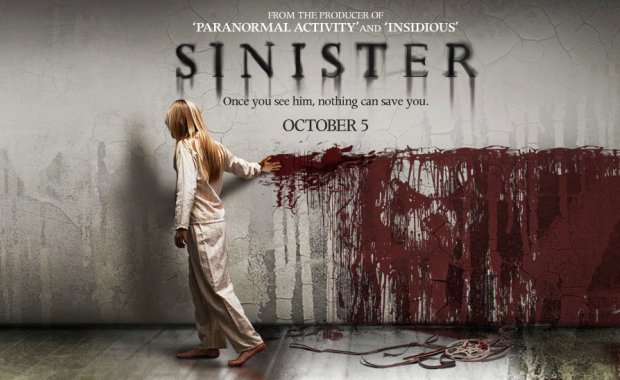 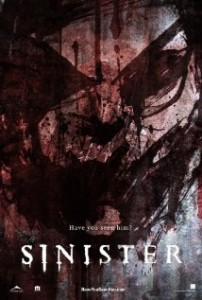 The sheer ubiquity of the mid-range US horror and its near saturation of the multiplex means that viewers cannot help but approach them with a degree of weary “been there, done that” cynicism. Familiarity with the worn tropes (spooky children, the false jump-scare etc.) has dulled any enthusiasm audiences may have once had for these films. On the surface, Sinister looks like it will fall into this trap, but it turns out to be a genuinely creepy horror film that thrills and unsettles in equal measure.

Ethan Hawke plays true-crime writer Ellison Oswalt whose bestselling book Kentucky Blood is now a decade behind him. After becoming increasingly desperate for another hit, Ellison takes the radical step of moving his family to a house where all the members of a family were murdered with the exception of the youngest daughter who has disappeared without a trace. Convinced that this is the opportunity (and possibly final chance) to rescue his flailing career, he plans on using the family as the basis for his new book.

Ellison’s reputation for showing the police up in his books by finding things they missed does not sit well with the local constabulary and leads to a few prickly encounters early on in the film with a reticent sheriff (Fred Dalton Thompson). Things are not much better with his family either: his wife, Tracy (Juliet Rylance), keeps trying to persuade him to take up teaching given the toll Ellison’s writing takes on him, his young son, Trevor (Michael Hall D’Addario), has intense night terrors after being exposed to some dark material in his father’s books and his daughter, Ashley (Claire Foley), just wants to move back to their older and bigger house. Whilst looking through the attic shortly after moving into the house, Ellison finds a box of Super 8 home movies. Things take a dark turn when he realises that each reel shows the murder of a family by an unseen assailant.

One of Sinister’s many ace cards is the casting of Ethan Hawke who attacks the role of Ellison with a level of vigour usually reserved for his more art-house projects. Hawke’s melancholic air and increasingly world-weary cynicism suits the role well. While his decent into alcoholic purgatory is nicely played, he’s at his most convincing during the small moments – the quiet desperation and frayed ego of the writer clutching at his glory years by re-watching videos of himself on talk shows in more successful times.

Hawke’s performance also brings a degree of authority to the film’s more psychological aspects. Whilst remaining within the usual parameters of a studio horror film in terms of its psychological depth, there are glimpses of something deeper and darker at work – from Ellison’s worrying reasons for moving to the house to the noticeable strain it takes on him. This works well with the film’s choices of cinematic reference points. Sinister’s style, with its dark and moody aesthetics, recalls the superior studio chillers of the 80s like Tobe Hooper’s Poltergeist, with some touches from Stanley Kubrick’s The Shining thrown in. What Lies Beneath it ain’t.

Sinister’s use of found footage is also refreshingly interesting. There are five Super 8 home movies showing the murders that Ellison repeatedly analyses throughout the film in different ways. Sometimes he looks at a particular section of a film, expanding it, digitising it and comparing it with others. The more interesting approach is where Ellison watches each film on constant repeat as if begging for them to reveal something. It’s during these almost ritualistic viewings that we see the films taking their toll on him, manipulating him and drawing him into further obsession. This aspect of the film also raises some interesting points about the way we watch horror and makes us consider our relationship with what we see. It’s a playfully perverse way of showing how these films get under our skin – from the numerous shots focusing on the camera equipment to the projector seemingly switching itself on while Ellison is in bed, it’s a film that understands how films can affect us. It’s no surprise that writer C. Robert Cargill is a former film critic.

One of the most surprising things about Sinister is how scary it is. Though it sticks faithfully to the traditional build-up-and-jump-scare technique, it does so very well. The more basic jump scares are amplified and elevated by an effective demon, dark aesthetics and genuine underlying creepiness. It also builds a degree of tension by keeping its mystery relatively hidden until the more pedestrian final reel.

Sinister manages to overcome a familiar plot by offering a terrific central performance, a cine-literate take on found footage and, perhaps more importantly, some excellent scares.

Trouble with the Curve