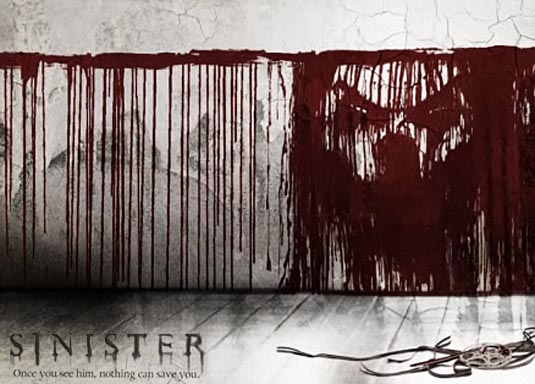 Horrors often roll off the production line at a rate of knots and most can be found six months later in bargain bins up and down the country.  Sinister offers a higher class of film. Clever cinematography, decent acting from it’s lead and a relatively solid storyline on which to build the scares. While falling into the horror genre, Sinister doesn’t automatically jump to the tried and tested make the audience jump as much as possible, in fact for the first forty minutes or so, it feels much more like a thriller akin to the video game Alan Wake, than an out and out fright-fest.

Hawke creates a decent personality with Ellison, conflicted and desperate to rekindle his former fame, while trying to convince himself he is doing what is best for his family. His job borders on obsession and along with a taste for whiskey it calls into question what he believes to be real. Unfortunately the same can’t really be said for the supporting cast, Juliet Rylance is at best mediocre as Hawke’s wife, Tracy, while their children don’t really have enough individual screentime to be judge.

Some clever editing and special effects create a far more rounded film than usual. A deft score that limits the use of the usual horror set-up involving softer music building into an instant and over the top crescendo, gives a chilling, almost serene atmosphere broken only when necessary.

Sinister however, isn’t without fault, it’s by no means perfect and fall short of Insidious in terms of recent horrors, mainly due to its predictability. The advertising campaign behind the film is somewhat to blame as the trailer gives away a substantial amount of footage from the films later stages and the poster representing Hawke’s child, constantly stuck in this reviewers mind whilst watching the film. The story is strong in parts but transparent in others and while this can be forgiven somewhat it still takes the shine of an otherwise well polished film.

While, Sinister is not short of gore or scares, it lacks the depth and direction to truly shine. The best horror of 2012 so far and it’s likely to retain that honour unless the cash cow that is Paranormal Activity 4 pulls something special out of the bag.

Sinister is a decent addition to a tired genre.

Related Topics:Movie ReviewReview
Up Next