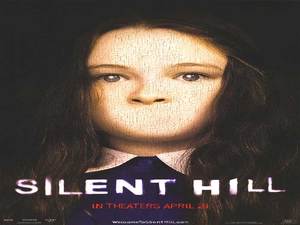 Possibly one of the scariest game franchises around, Silent Hill is high up there with such horrors as Resident Evil, F.E.A.R and Condemned. So naturally, it would be silly for Hollywood to not to gain a quick few dollars and adapt this successful series to the big screen.

In 2006, the story of this poor unfortunate ghost town was brought to cinemas worldwide in one of the more triumphant video game to movie adaptations so far. Directed by Christophe Gans and written by Roger Avery (Reservoir Dogs, Pulp Fiction) the movie captured the horror and tension of the video games perfectly. To fans delight, there was not much changed for the cinematic retelling of the game. The biggest change however would be the male lead role of Harry Mason being replaced by a female protagonist Rose (obviously for the male viewers) portrayed by Radha Mitchell (Pitch Black, The Crazies, Surrogates)
The story follows Rose (Mitchell) as she searches the town of Silent Hill for her missing daughter Sharon. During her search, she is plagued by reality shifts as the town turns into a dark, malevolent horrific place populated by nightmarish creatures.

Camera angles taken straight from the game add to the tense atmosphere as you follow Rose through the atrocious town in her exploration for her daughter. The soundtrack almost entirely consisting of music from the games is brilliantly scored to the on screen horror. The script a bit rocky, but with most horror films, the script is the least of the viewers cares. (Unless a terrible American accent is given to Sean Bean, but we wont go into that)The creature design is by far the most pleasing effort of the film. Each one is beautifully horrendous and more disturbing as Rose ventures deeper into the town. Taken straight from the game in all their horrific glory, from the minor monstrosities such as The Janitor and Lying Figure, to the full-blown nightmare inducing Nurses and Pyramid Head, each monster is a twisted piece of art.

There are a few differences between the video game and it’s silver screen rendition. For example, previously mentioned, the lead character replacement, the constant snowfall in the game is replaced by a constant rain of ash to fit in with the story of the town’s fire and the creation of the new antagonist Christabella played by Alice Krige (Star Trek: First Contact, Sleepwalkers) was a major change in relation to the video game.

Silent Hill is definitely one of the better movie adaptations of a video game. Scary, gripping and beautifully portrayed, to fans of Silent Hill it should more or less please and to those new to the Silent Hill franchise and have never played a game in the series, it is still a good horror movie that delivers nightmare filled nights.