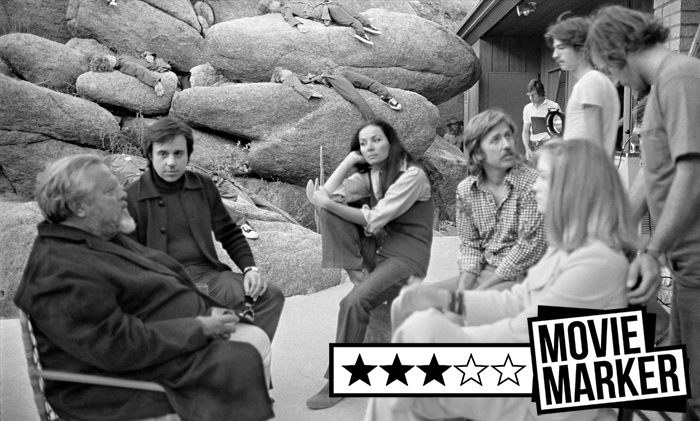 More than 40 years after Orson Welles finished principal photography on The Other Side of the Wind, his recently completed film will have its world premiere at the 75th annual Venice Film Festival. The completion of the legendary unfinished film was spearheaded by producers Filip Jan Rymsza, who spent years brokering complex deals with rights holders, and Frank Marshall, Welles’ line producer on the 1970s shoot. Netflix will be streaming the film from November but this is a rare treat to see a new Wells film on the big screen. So what is it all about you ask? The film  takes place at the 70th birthday party of director Jake Hannaford (John Huston), who is struggling to complete his comeback film during the rise of  New Hollywood. Attending the party are successful young directors, like Brooks Otterlake (Bogdanovich), hangers-on and critics. Hannaford dies at the conclusion of the party. Welles’ movie recounts Hannaford’s final hours.

It was a pure honour and a privilege to see The Other Side of the Wind (even more so on the big screen). The actual film within the film is about as heavy and thick as it is psychedelic and beautiful and features some truly masterful shots. Oja Kodar gives a very intriguing and mysterious performance. I honestly wished it would stay in the film within a film more. The Other Side of the Winds main issue is the story was very hard to follow and the snappy editing will leave you with a headache. Welles was known to be experimental during his latter days. The Other Side of the Wind a very extreme version of F is For Fake. Some of the imagery and scenes can be very interesting. Mainly during the chaotic party shots, we can feel the claustrophobia in the party.

Huston’s character is surrounded by people and he knows how to manipulate the situation. The scars of the film’s troubled production most make themselves obvious. These scenes are filled with witty comments and observations. The pacing of these chaotic scenes are fast and ruthless pace. The characters are swapping in and out of the film initially makes them feel like an assault. You feel that you are part of Jake Hannaford’s ever busy mind with all the human interaction in these scenes. You could listen to John Huston talk for days at a time. He really does embody Orson Welles in mind and body. The film’s runtime does roll on for far too long. It could be easily a 90 minute film, but Welles shot a lot of footage and Netflix want everything out of it. The Other Side of the Wind leaves a noisy style with garbled message, but the feeling that finally resonates is tragedy.