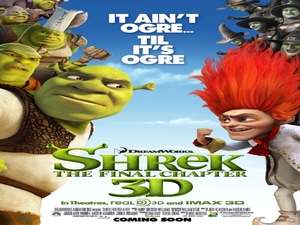 Following the ‘flops’ of previous sequels Shrek 2 and 3, Shrek Forever Afterhad a reputation to save after dropping into freefall following the spectacular original. In fairness, Shrek was so different and clever it was always going to be a hard task.

The latest instalment promised to return to the roots that made Shrek so popular, achieving what many films since Toy Story had failed; creating memorable characters and humour that adults and children alike can enjoy.

The addition of Rumpelstiltskin, as well as The Pied Piper and numerous witches have helped, as well as a cameo from the films funniest character, a small overweight child named Butterpants who insists that Shrek ‘Show me the roar’. It’s these moments of ingenuity from writers, Josh Klausner and Darren Lemke that give the film a well needed return to its comedy roots.

The film itself has a deeper storyline that its predecessors: after failing to get The King and Queen of Far Far Away to sign over their kingdom to him, Rumpelstiltskin convinces Shrek to enjoy a day of being his old self, an ogre feared by all. Shrek, suffering with the burden of routine and family life, agrees to the idea and is transported to a time where he technically doesn’t exist. Realising what he has lost Shrek sets out to rejoin with friends and true love, Princess Fiona, who have completely forgotten about him.

The actors bring the usual class to the band of heroes and heroines. Antonio Banderas, Cameron Diaz and Eddie Murphy all perform fantastically.

On the downside, the film is far too short, scraping eighty-five minutes; it wraps everything up far too quickly. While I am wary of films that run for too long this film could have easily given an extra ten minutes of laughs.

An overall, good family film, which is entirely what it aims to be. Despite not emulating the original, it is the best attempt of matching the film which was loved by many.

Shrek isn’t comedy gold, but you certainly won’t be turning green after watching it.