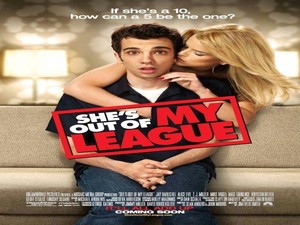 I rate “She’s Out of My League” what Kirk Kettner’s (Jay Baruchel) best friends rate him, a hard five.  A Judd Apatow wannabe romantic comedy that while sweet and thoughtful with strong performances from the leads, it miss-fires on the gross-out humor and putters out with it’s hurried cliché airport climax.

Kirk works in a low-level position at Pittsburgh International Airport, doesn’t have college degree, drives a crapbox for a car, and has the looks and figure of someone mistreated by the Germans.  I can’t relate to that at all (insert sarcasm) (insert this).  So when Kirk ends up with the attention of the knockout Molly (Alice Eve) who just so happens to be a very successful event planner with a spare lawyer degree, well he and his best friends can’t explain it.  Because you see, Molly is a hard 10 and Kirk is but a five and as his best friend Stainer (T.J. Miller) states, the laws of attraction is clear that no one can jump more than two spots in either direction.

As dating ensues between the two, Kirk’s insecurities get the best of him while Molly is working on her “keeping it safe” issues.  I enjoyed the social commentary that “She’s Out of My League” concentrates on with what those insecurities that we and the people around us could put on us.    None of this would come across if it weren’t for the likable Jay Baruchel of “Tropic Thunder”.  He brings a nice portrayal of a dude who thinks he knows what his worth is and is terrified of eventually disappointing someone so out of his league.  And kudos to you Alice Eve on believable acting of a girl that looks like that liking a guy who looks like that that isn’t in a band which as the movie points out is the only examples I’ve ever seen.

The romance is there but the comedy is far too infrequent.  Often the jokes got a light chuckle or nothing at all in contrast to its superior big brother “The 40-Year-Old Virgin”.  In one scene (from the trailer), Kirk who hasn’t been physical in a while blows his proverbial load (I’m not swearing but I don’t know how else to say it) as things get hot and heavy that brings out an uncomfortable laugh but not the sidesplitting event it’s hoping for.  I coughed up a big “bs” when Kirk has a hard time shaving his undercarriage and his G-rated friend Devon (Nate Torrence) helps out like the friendly family bartender.  And shame on writers Sean Andrews and John Morris for creating such a hilarious idea of having a Hall and Oates cover band and having it not come out funny.
With all its flaws I was leaning towards liking “League” until its messy cliché “race to the airport” climax that took me right out of it like a Brett Favre interception.  I think first time director Jim Field Smith saw the classically used end point and hoped to play with it but failed to give it enough of a wink to the audience for it to play.