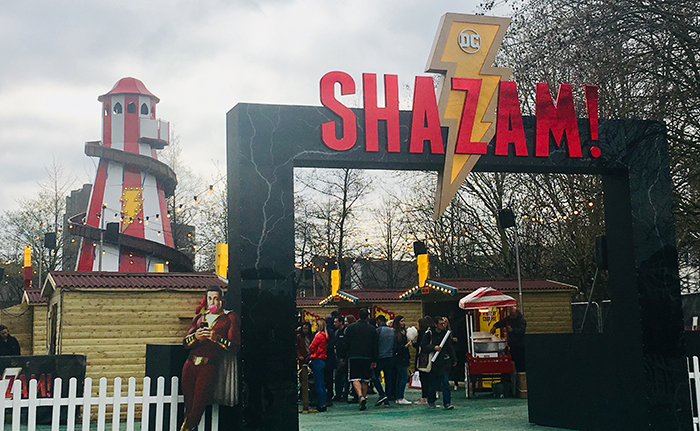 Warner Bros.’ DC comic book adaptation Shazam! is just two weeks away, but for fans who simply can’t wait that long to experience the magic of Earth’s mightiest mortal, a funfair inspired by the film has taken over London’s South Bank.

The free-to-enter funfair tests participants in order to see how they stack up against the mystical superhero, with carnival games themed around the six elder powers which give Shazam his abilities.

A deductive challenge to find a magic eight-ball in one of six concealed boxes will test for the wisdom of Solomon; a high-striker will require the strength of Hercules; a pair of comically-oversized weights will seek the stamina of Atlas; a darts contest will need the power of Zeus; a mystery wheel containing all manner of creepy crawlies will surely only be bested by one with the courage of Achilles; and a skee ball course will need the speed of Mercury. And that’s all before the helter-skelter slide at the end!

Fans poured into the fair yesterday, but you’ll have to be quick to conquer the wizard’s challenges – the fair will be open from 10:00am to 1:30pm today on London’s South Bank, at the Bernie Spain gardens.

Everyone who attempts all six challenges will win a prize, and those who conquer all will surely be rewarded justly.

Shazam! is the seventh film in WB’s DC Extended Universe. Based on the DC Comics character of the same name, and directed by David F. Sandberg (Annabelle: Creation), the film follows orphaned teenager Billy Batson (Asher Angel) as he is imbued with the magical ability to transform into an adult superhero (Zachary Levi) by uttering the name “Shazam!” – and sees him face off against the evil Dr. Sivana (Mark Strong), who seeks to covet his power.

The film releases in the UK on the 5th of April, with early screenings taking place in select Odeon cinemas this Wednesday.

Us Overperforms At The Box Office, As Captain Marvel Crosses $900M