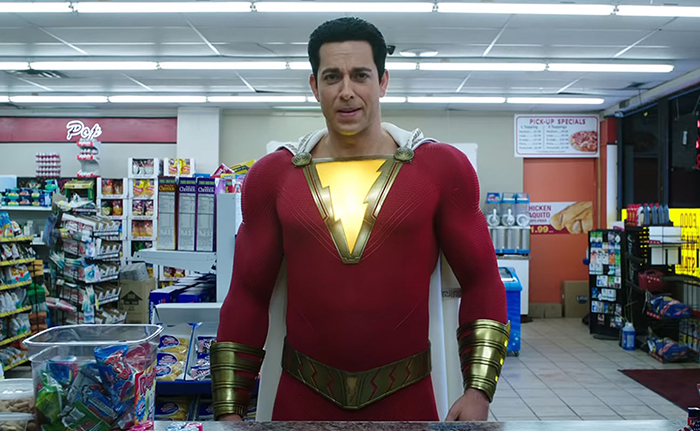 Director David F. Sandberg’s forthcoming DC Comics adaptation Shazam! has screened to critics, and early reviews have dropped ahead of the film’s release which paint a picture of a feature that’s sure to delight fans and newcomers alike. Check-out the reviews round-up below:

Variety:
“The fact that everything Shazam does, from taking bullets in the face to popping in and out of his superhero identity by barking the word “Shazam,” seems both valiant and slightly daffy is part of the film’s change-up charm. Shazam! suggests that if you’re taking a superhero’s powers deadly seriously, you may not be totally connecting with the spirit of the comics. The movie says: You’ve got to giggle at this stuff. That’s part of the adventure.”

The Hollywood Reporter:
“The most kid-friendly DC movie so far, Shazam! is thoroughly entertaining. But much like its central character, a 14-year-old boy able to transform himself into a superhero by uttering the titular incantation, often the pic gives the impression of a kid playing in the adult leagues.”

Entertainment Weekly:
“Shazam! is basically two movies in one. One with Levi and his wise ass foster brother (a fresh Jack Dylan Grazer), the other with Strong and all his snarling, computer-generated gobbledygook. And they both have the other in a headlock, wrestling for the soul of the story. I loved one, yawned through the other.”

Empire Magazine:
“The hardest power to depict onscreen is the wisdom of Solomon, but Shazam! makes clever decisions, mixing middle school snark with disarming sweetness. And — yes — it delivers the requisite lightning-strike punch-’em-ups with considerable force.”

The AV Club:
“It continues the vein of the most recent DC Comics adaptation, Aquaman, breaking with the Strum-und-Grit approach that characterized Zack Snyder’s shepherding of the franchise; if DC movies can’t offer the sweeping arcs and conflicts of the Marvel Cinematic Universe, they can at least be forgettably fun.”

Forbes:
“Most importantly, Zachary Levi and Asher Angel have offered a distinctly charming version of Shazam to go along with Gal Gadot’s Wonder Woman and Jason Momoa’s Aquaman. Shazam! ends its story in an auspicious place that will absolutely leave folks excited for a sequel. If WB keeps this up, they may end up with a true murderer’s row of Super Friends who we’d actually want to see interacting in another Justice League (especially if they wise up and go the Legion of Doom/Challenge of the Superfriends route).For the first time, the theoretical battle between DC Films and the MCU feels like a fair fight. Shazam! is just that good.”

The Guardian:
“Buoyant and unpretentious, Shazam! aims low and mostly succeeds, a kid-friendly caper powered with enough energy to keep its target audience engaged with a fun central conceit that plays like a cross between Big and Superman.”

The Telegraph:
“Shazam! is notionally the latest instalment in the DC Extended Universe. But the film doesn’t remotely feel assembled to a franchise-building template: rather, it’s jauntily at ease doing its own thing throughout, which is by turns infectiously silly and unexpectedly warm-hearted.”

Us Overperforms At The Box Office, As Captain Marvel Crosses $900M