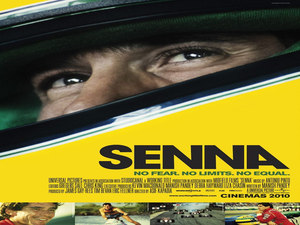 Rent classic movies  and also new films like Senna at LOVEFiLM today, head over to http://www.lovefilm.com/ now and get a 30 day free trial

Imola, San Marino Grand Prix 1994. A Weekend which changed Formula One significantly, and Asif Kapadia’s documentary traces the career of one of the most naturally talented drivers Formula One had and tragically lost.

Bafta award winning Kapadia(The Warrior) sourced a very impressive library of archive footage rumoured to total around 15000 hours including many never before seen clips including inside the drivers briefing room of the 1990 Japanese Grand Prix. Having previously seen a number of ‘Tribute’ documentary’s which have pulled together the crashes and confrontations without really explaining the cause and effect, I really hoped for something a little more fulfilling and Senna doesn’t let me down at all.

Senna opens introducing us to a young man from Brazil, who whilst having a family not massively wealthy, were able to fund his racing in karting. Ok so that rules out the ‘Rags to Riches’ story, so you may wonder in which direction the documentary is trying to take us. Quite quickly brushing over the next few years and rise through the motorsport ranks to 1984 and a rather humble Ayrton Senna being given his Formula One debut with the Toleman team. Although not a massively successful debut season a very natural talent becomes clear, especially his phenomenal skill in wet conditions.

We move on rapidly to 1989 and the directors intentions with this film become very apparent. Ayrton dared to question the politics of the sport which came to view at the Japanese Grand Prix when along with his McLaren team mate Frenchman Alain Prost had been dominant throughout the season collided during the race deciding the world title in Prost’s favour. Only Prosts French countryman Jean Marie Balestre (Chairman of FISA who oversaw Senna’s disqualification) will ever truly know if it was the correct and fair decision. Ayrton and and McLaren Team Principal Ron Dennis challenged the consistency and application of the rules. That previously mentioned 1990 drivers briefing footage is now very relevant as comments about drivers conduct appeared to be directed directly at the Brazilian. Once again Senna and Prost had their race cut short with another collision this time with the title going back to Brazil.

As the film builds to a finale, we find ourselves at the 1994 San Marino Grand Prix, Ayrton had already seen his good friend and fellow Brazilian,Rubens Barrichello hospitalised after a horror crash during Friday Qualifying and Austrian Roland Ratzenberger crashing fatally in Saturdays session. A visibly distressed Senna subsequently called for the reformation of the Grand Prix Drivers Association in association with Gerhard Berger (Austria) who pressed for improvements into both car and circuit safety.

Sunday 1st May 1994 Still remains the most recent date on record claiming the life of a Formula One driver as Senna left the track at high speed while leading the race.Kapadia’s documentary then takes us to the lined streets of Sao Paulo honouring their national hero.

Overall, A very well put together documentary which thankfully doesn’t rely on the controversy, it doesn’t even mention the off track assault on Eddie Irvine in 1993 or the Austrian flag that was found in the cockpit of Senna’s crashed car on that dark day in May in respect of Ratzenberger.What is does do very well is remind us that such a natural talent was taken far too early.