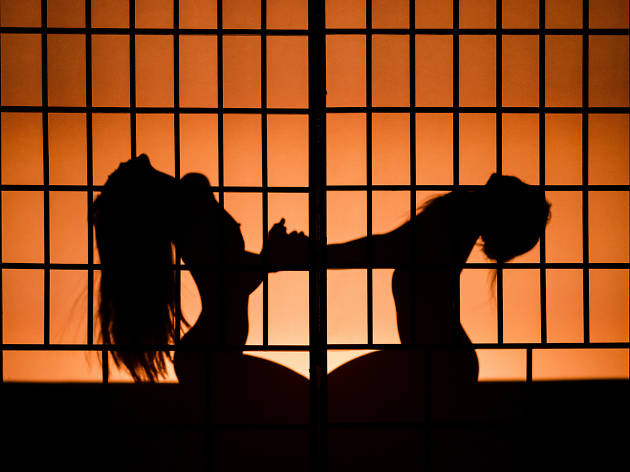 I always adore Secret Cinema, especially when it’s properly secret. It just has that extra layer delicious excitement whilst you get ready for the evening based on clues and heresay. Invited to the ‘Master’s House’ we were told to meet outside of the Troxy. ‘It’s going to happen inside the Troxy,’ said my plus 1. ‘Not necessarily,’ I smugly replied. ‘It’s probably based somewhere nearby in a really cool warehouse or something.’

Obviously I was wrong as we lined up outside of the Troxy, all in black tie. The effort the audience go to when attending these events never fails to surprise and elate me; everyone looked amazing. Floor length gowns, tuxedoes, beautiful shoes… Everyone had got the memo and delighted with complete elegance. It wasn’t a disappointment to find ourselves at the Troxy as I love the place. I usually end up there to see a band; it’s charming and beautiful. This, however, was not the Troxy as I knew it. After being told that we were to use our notebooks we’d bought with us in preparation as our only means of communication, we were led through the back alleyway into the venue, full of atmospheric smoke and plants trailing up the stairs; we walked in a hushed silence until we were allowed to enter ‘The Master’s House.’ I couldn’t believe it when I stepped inside; this was not the Troxy as I knew it.

We had seemed to enter a Japanese residence, complete with handmaidens to lead us in silence to our seats for the evening. We were able to eat from beautifully arranged bento boxes (using our notebooks to order of course) and grab a glass of champagne before turning ourselves to the stage, where dancers were acting our key scenes of the film to a beautiful soundtrack of live piano and violin.

On our table we were able to amuse ourselves with origami and sudoko games, and when my fellow neighbours arrived we bowed in greeting; silence still preserved and respected so as to not upset the Master.

The Master himself arrived to once more go over the rules of the house. We were entreated to stand and explore the space, where beautiful details (paper lanterns, delicate ice creams, cherry blossom trees) made the evening even more surreal. ‘I feel like I’ve walked into a film,’ my friend wrote to me, and so did I. It was a completely immersive experience; bewitching and compelling.

The evening was everything I love about Secret Cinema; elaborate, immersive and spectacular. The film was suitably dramatic and memorable. I can’t wait for the next one.

MM Supports: Invasion Of The Not Quite Dead