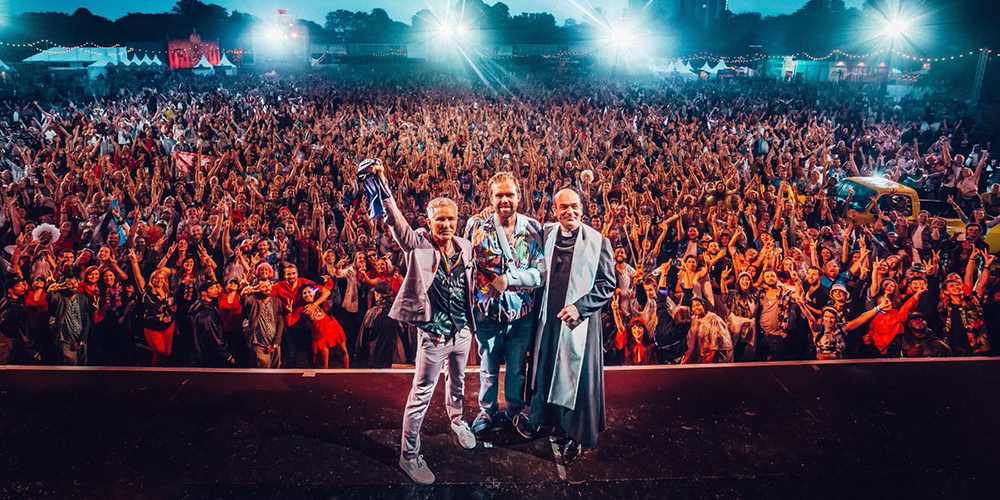 “I may not be funny, but I know wine!” declares Rob*, a chartered surveyor from Grays to his partner and their couple friends. Kelsey, meanwhile – a quite intoxicated dental hygienist – would like to share a frankly uncomfortable number of pubescent memories with everyone in earshot. Rob’s in front of us, Kelsey behind, and, since we never directly spoke to either of them at any point during Secret Cinema’s latest dose of “experiential cinema” – Baz Luhrmann’s 1996 reimagining of Romeo and Juliet – and we’re nearly bankrupt by the time it even starts, you’re left with the inescapable conclusion that this is one of those events that truly proves bigger certainly isn’t better.

If you’re unfamiliar with Secret Cinema, the basic gist is the creation of an immersive environment in which to catch your favourite movies. Classics such as Back to the Future, Dirty Dancing, and Blade Runner have previously been bestowed the magic touch of creative Fabien Riggall, with the feverish anticipation for Romeo + Juliet signifying that Luhrmann’s iconic 90s flick has, too, earned itself bonafide classic status. Truthfully, on watching the film back now two decades later, it genuinely holds up as the work of a genuine auteur – to say nothing of Leo’s introduction doubling retroactively as the public unveiling of a true blue movie star. The Secret Cinema treatment of it, however, emerges far more disappointing.

Having come across a wealth of decidedly negative feedback online (and via friends) in the days leading up to our Wednesday evening visit, we’d wisely decided to get to our designated meeting point (directly outside Acton Town station) with time to spare. It was a wise call, and – though the event would noticeably increase in population by what seemed to be every quarter hour (Secret Cinema employs staggered entry for seemingly this reason) – our guided fifteen minute walk to the event proper at Gunnersby Park was met with only minor queuing and waiting. “Were the negative reviews just the ramblings of haters brought on by bad weather?” we asked ourselves. To an extent, it would transpire. Secret Cinema themselves have instead crafted an entirely new set of problems – the most undeniable of which is the sudden upscaling of both scale and subsequent cost.

The vision behind it all is unquestionable, with Riggall ostensibly creating an outright festival around the fandom of Luhrmann’s classic – complete with diagetic stage-shows, an actual drag club, and even a rap battle between several eerily well-cast actors as the instantly recognisable characters. For all of that vision and reverence for the source material, however, Secret Cinema has this time around ditched the element that made it so unbeatable to begin with – namely incorporating the guests themselves into the narrative of which they’re so clearly a fan. 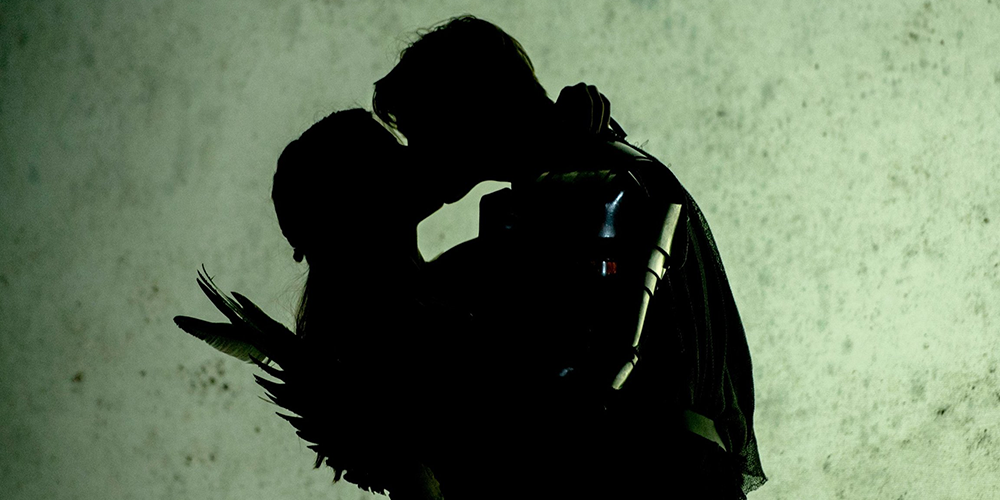 Previous events have always adopted the position of guests effectively serving as background extras to the film being brought to life around them, with 28 Days Later, to name one, going to the extreme of separating the guests by gender and… well, if you’ve seen the movie you can hazard a guess. If not, watch 28 Days Later. Just cos – it’s a great movie. As indeed is Romeo + Juliet, but it makes for a far less involving event, as it’s really nothing more than a vaguely interactive fairground topped with an outdoor screening. It’s a great fairground, sure, and that rap battle’s fun as hell, but for the sizeable dent it’s going to put in your wallet, it’s definitely at the more extreme end of fandom.

Did I mention there are rides? There are! In keeping with the Verona Beach template, there’s a carousel and a ferris wheel. Heck, there’s even a hook-a-duck game. Don’t get too excited though, as you’ll need to pay for each of the rides with a £3.50 token, and if you have any delusions about getting anything out of the ducks, brace yourself for the tiered system that can genuinely see you spending a little south of £20 for a “medium” prize. By this point, you’ll probably want to try and drown your sorrows at least a little whilst you wait the three hours for the movie to begin, refresh yourself before venturing round the surprisingly repetitive (yet wittily titled) themed stalls. Forewarning: sharpen those debit cards. Cos they’re about to bleed you dry.

Owing to driving, I ordered a simple Diet Coke for the princely sum of £2.50. Resigning myself to the reality that this 90p can coming with a near two hundred and fifty percent markup, you can imagine how much it then stung when – during the later drag club experience – I ordered two Diet Cokes only to see the same size can split into two ice-stuffed plastic cups and be slapped with a straight-faced bill for a fiver. “Let it go”, I thought. “It’s an evening out.”

That being said, such access came after what can only be described as a game of psychological warfare with the (apparently unpaid) cast who doubled as gatekeepers for the club – itself to one side of the enormous outdoor custom screen. If the goal is to obtain a simple cardboard invite, by god do they make you work your ass off for it – though, at least the atmosphere inside is a positive one. Even if most present have been charged 500% more than a newsagent would for something as complex as a soda.

Both the drink and the intoxication elements would rear their heads again before the film would begin, with a last minute bevvie-run seeing a farcically drunk bartender forced to down the drinks he got wrong (“he does this every round!” a young woman explains) before knocking mine over entirely. Still, at least he only charged £2.50 a can. 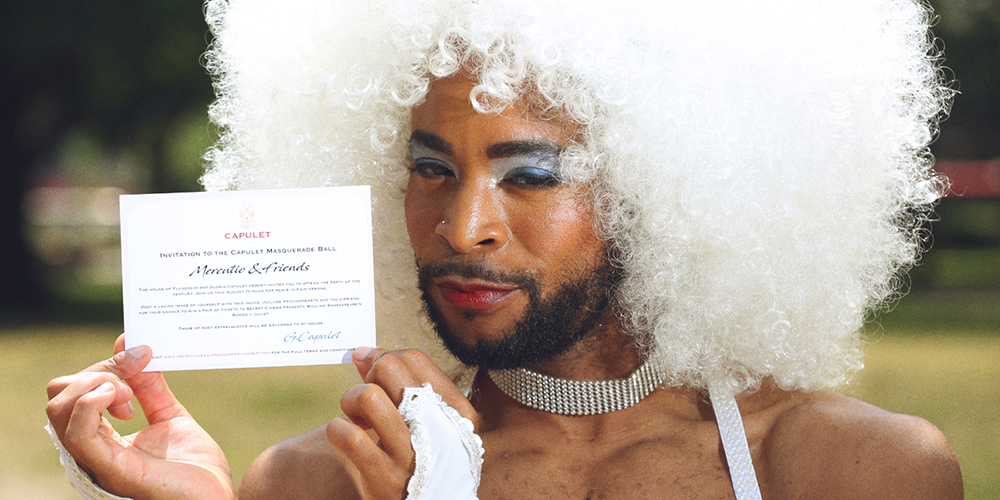 It’s then time to take your seats for the big show. Or, you assume it is. Truth be told, there’s no audible prompt telling you as much – it’s just that the small scale theatrics you can see taking place on the distant stage are slowly ramping up in spectacle. I say “in the distance” because, you see, they don’t bother to show any of this on the enormous screen behind them, making it a trifle difficult to catch any of it once everyone’s begun to sit down.

“Begun” being the keyword. Remember: there’s no prompt that the show’s about to begin, and – since Secret Cinema typically utilise their actors in a silent reenactment capacity during the film itself (it’s a quirk, but it works), what you wind up with is actors legging it through a seated crowd whilst a large number of them are still trying to find where they put their blankets down two hours earlier. One of the actors stumbled and fell mere metres from us. They shook it off without breaking character and carried on like a trooper, but there’s surely a health and safety factor there at the very least. And you risk stepping on my lukewarm £2.50 Diet Coke at your own peril, sir.

Once you’re into the film, however, all of the woeful shortcomings fall away, and you’re left with a crowd who (mostly – I’m looking at you, Kelsey) really just want to kick back with their friends to quote and sing along. It’s an infectious feeling, there’s no denying, and one that’ll win over even the staunchest cynic, I’m sure. Like literally any outdoor screening, though, it’s those like Kelsey and Rob who seemingly set out to torpedo the fun. And the staff couldn’t care less. They won’t bother either unless they have the audacity to take their phones out of the duly-provided cellophane wrappers. Priorities and all that.

That’s the rub. It feels like Secret Cinema grew up and became kind of a dullard. Secret Cinema’s no longer your friend in the Metallica t-shirt with the piercings, it’s instead settled down and got a mortgage, concerned with financial planning and remembering to pick up the No Nails from B&Q. It’s a bloody good time if you can afford it (I can – I just begrudge spending what could work out up to £150 on something without USB ports for an evening’s entertainment) but Secret Cinema’s Romeo + Juliet is ultimately a fan convention with an outdoor screening component. There’s nowhere near enough to it to fill the three hours you’re given to take it all in, and – since you’re told not to take your phone out of the packaging and journey to Mordor every time you want a smoke (including you, vapers) – that’s a lot of time to kill with no option but to retrace your steps.

Romeo + Juliet’s a good time, but it’s far and away one of the least impressive Secret Cinema events to date. If you’re a fan, go, but be sure that debit card’s good to go. If you’re not, you should most assuredly stay away. And if you’re Kelsey – I’m glad your boobs came in eventually. Fourteen sounds like it was rough and I know you waited. Rob – you’re not funny. Staff – shut people up in future.

*Names have been changed for anonymity.

Secret Cinema presents William Shakespeare’s Romeo + Juliet runs from August 8th-25th, 2018 in London. Visit the official site for tickets and more information, and check out the trailer below.