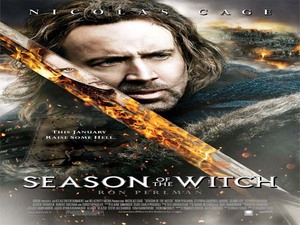 Nicolas Cage has been one of my very favourite actors for the last 15 years. When he is on form, there is no one who can touch him and do what he does – Leaving Las Vegas, Bad Lieutenant: Port of Call New Orleans, Face/Off, Adaptation, Birdy, Wild At Heart are perfect example of this.

Since his Oscar in 1995, he has made some excellent pictures, but some of his choices have been bizarre. Films such as Windtalkers, Kick Ass, and Bangkok Dangerous were undoubtedly good ‘on paper’ but didn’t necessarily work, but the real bombs are choices like The Sorcerer’s Apprentice, The Wicker Man, and now this, Season of the Witch.

Not even I can defend this film. What Cage saw in this film is beyond any one’s guess, only he can tell us that. It is a disaster from beginning to end; story, screenplay, characterisation, CGI, sets, lighting – it’s all as bad as you’ll see from a Hollywood release this year.

It’s not even done for laughs. The story takes itself seriously but it’s not even believable in the realms of your wildest fantasy. In fact, there isn’t even a witch, it’s the devil in disguise. Yes, it’s that ridiculous.

The film ends with Cage and Ron Pearlman (another actor who should know better even if he’s not A-List) having a physical fight with the Devil himself in what amounts to one of the most cringe-worthy computer generated scenes you’ll ever see. Director Dominic Sena’s best film to date is Swordfishand this is a lot lot worse than that film. That tells you everything you need to know.

In retrospect, there is nothing to recommend in Season of the Witch. Another low for Cage. At least we know know Drive Angry, Trespass, and Ghost Rider: Spirit of Vengeance will be marked improvements in his CV.

Why? Because they simply cannot be any worse.