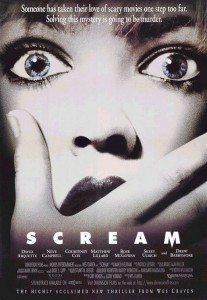 Now we’ve all sat through those horror films during which at regular intervals, you will find yourself, or one of your pals, mindlessly screaming (no pun intended) at the screen with, or a variation of, ‘Don’t do that!’, ‘Don’t go in there!’ or ‘Don’t go and investigate that strange noise that you heard coming from the basement!’. Well, Kevin Williamson was almost certainly one of those screen screamers when he wrote the script for a film that reinvented the slasher in the 90’s.

When bubbly, blonde (of course) Drew Barrymore, home alone (had to be) begins to receive sinister threats from a complete stranger down the phone (…yawn) it appears just another teen splatter fest plucked from the over worked conveyer belt of the slasher factory. But what separates Scream from its predecessors is a perfect layering of terror, parody and tribute. In essence, Scream pokes fun, or stabs for use of a better word, at itself. Williamson and director Wes Craven -father of everybody’s favourite clawed, loud mouthed killer Freddy Krueger – set up an all too familiar masked-killer-butchering-a-group-of-small-town-teens scenario but this time chuck into the mix characters who have all seen the classic films Scream is imitating and thus have the knowledge of how to avoid the clichés and the key rules of horror film survival. Ahhhh, cue the relieved ‘FINALLY!’ sighs. And yet, Scream’s bunch of sassy, know-it-all adolescents still succumb to the killer’s blade by following the conventions they themselves condemn. In one such incident, when asked by the killer whether she likes scary movies, one character replies with ‘They’re all the same. Some stupid killer stalking some big-breasted girl who can’t act who is always running up the stairs when she should be running out the front door. It’s insulting’. And what’s the first thing she does when attacked… Yep, you guessed it.

But Scream isn’t all postmodern fun and games. There are genuine moments of terror and bloody horror, allowing Craven to exercise his brilliant suspense techniques and no holds bar brutality which makes him one of the genres most notable auteurs. Just watch the opening 12 minutes and see for yourself. And the film beautifully pays homage to the greats that went before it: the video store geek’s urge for the police to watch Prom Night and the janitor in the Freddy outfit are but only two examples. Oh! And and I’m sure I’ve heard that name Loomis from somewhere too. It’s a double edged nostalgic knife of horror parody and appreciation. It’s one for both new comers and avid veterans of horror.

In Elm Street, Craven wrote a new synonym in the book of horror with Freddy, however, Scream is perhaps Craven’s most accomplished work. Along with Williamson, and a cast of young, exciting actors and actresses, who for many, are trying their first hand at horror, he delivers a film that is suitably refreshing in a stale sub genre that was screaming (sorry again…) out for something new. Scream’s sequels, parodies and successors, although by themselves worthy, are simply cower away in comparison. Its impact was so radical that imitations released since often get the same ‘Not another one!’ treatment from audiences that slasher films were subject to pre-Scream. But viewed in context, Wes Craven’s Scream remains a vital contribution to horror and a suitable addition to the 1990’s post modern club, continuing to be, above all else, irresistibly cool.