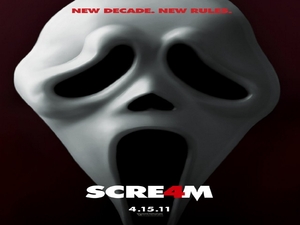 15 years after the original ‘Scream’ Wes Craven returns with ‘Scream 4′. Not only has Craven returned but also the original cast comprising of Neve Campbell, Courteney Cox and David Arquette reoccur in this fourth installment. Also we have a

whole bunch of new faces that are ready to get sliced and diced. Emma Roberts (who struggles here) plays Sidney’s cousin Jill; also a great Hayden Panettiere and Rory Culkin make an appearance.

‘Scream 4′ sees Sidney return to Woodsboro promoting her self help book ‘Out of Darkness’. Her return is greeted by the murder of two high school students. Of course all hell breaks loose and Ghostface is back causing havoc. The opening includes numerous cameos from popular stars, misleading us to think they are the real victims but it ends up poking fun at never ending sequels. Obviously these being scenes from the ‘Stab’ films which are popular throughout the ‘Scream’ series. It’s fun but when it goes back to reality the opening disappoints. The suspense is non-existent and we have an actress who struggles to be believable. However it picks up when our much-loved characters Sidney, Dewey and Gale appear after an 11-year absence. Sidney is stronger than ever and Gale is back to her bitchy best.

After just over a decade of not being on our screens it’s interesting seeing how the series has developed with the new generation. This fourth installment relies on modern technology (live streaming and social networking being the main focus) and tries to be clever by incorporating it into the story. We now have Ghostface filming murders, wanting to show the world the massacre brought upon Woodsboro. It may not be the most original idea but it keeps the franchise fresh and up to date. Other than that there is nothing-new here, just added blood and gore to compete with the torture porn films that are popular nowadays. Ghostface is menacing as ever and some of the kills are brutal, a lot different from the violence we saw in the 90s.

Expect the unexpected when ‘Scream 4’ draws to a close as a surprising killer is revealed. The motive can be a bit idiotic but it does make a good point about how society has changed and how easy it is to get famous. The finale is satisfying enough with a clash between heroine and villain and good old cheesy dialogue.

‘Scream 4′ is missing the tension and suspense that the original ‘Scream’ had but it has its fine moments. The film focuses more on making fun of remakes and reboots and results in the movie being more funny than scary. However it’s good to see Kevin Williamson back writing after Ehren Kruger failed to impress with ‘Scream 3′. It may just be a reimagining of the original but it’s still fun. Added gore, clever kills and a surprising ending makes ‘Scream 4′ a good modern day slasher film.

It’s always entertaining when Ghostface is around.