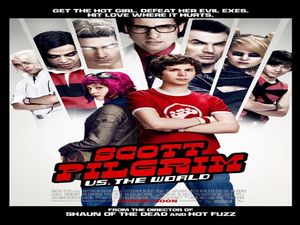 Based on the graphic novels of the same name by Bryan Lee O’Malley, Scott Pilgrim is the latest instalment from Shaun of The Dead and Hot Fuzz creator Edgar Wright. The film follows the fortunes of lead character Scott (Michael Cera) as he battles for his love of Ramona Flowers (Mary Winstead) against her seven evil exes’.

After an initial failure at wooing Ramona, they grow closer and Scott learns that in order to date her, He must defeat each of her 7 Evil Ex’s. The battles that ensue are nothing short of spectacular. Each taking on a different form, be it an actual fight or a music battle, each one is fresh, beautifully designed and perfectly choreographed.  The feeling that perhaps this may have been the films downfall, that as there are 7 ex’s to defeat the battles may get tiresome and repetitive, is quickly removed.

With actors such as Chris Evans of Fantastic Four fame, joining the cast the film grew in popularity along with a clever marketing campaign and fantastic trailer. However, it is not those that make the film unique, nor is it the comic book element: The graphic novel category has grown greatly in recent years and has produced some scintillating results-300 and Sin City setting the benchmark. The films head turner is its numerous and well used references to games. Creatively using games such as Zelda and Pac-man, as well as the idea of Scott gaining coins from defeating each of the Ex’s. With innumerable games either obviously or discreetly used- Final Fantasy, Castelvania, Tekken, and Tetris. Even from as early as the opening Universal logo that is presented in 8bit graphics.

However this could be seen as the films downfall. It is targeting a particular age group too much. It’s the definition of a marmite film. If you enjoy the game references you will love it. However if, understandably the game references aren’t clear to those who have never played the games then, you may sit there wondering what all the fuss is about. There is also a lack of explanation as to why Scott Pilgrim is so good at fighting. He seems instantly able to pull off extravagant moves and fighting techniques. However, this is lost in the excitement of the fights and doesn’t play on the mind enough to ruin the enjoyment.

Another fantastic inclusion is the element of music that is used throughout, from Scott being Bassist in the Sex Bob-ombs (another reference to Mario) to the music battle with Ramona’s Twin Ex Boyfriends who play piano, in the most dazzling of the fights in terms of special effects. The music is well chosen and written and refuses to remove itself from your head after the film.

Scott Pilgrim is a thoroughly enjoyable film; it won’t appeal to everyone, however those who appreciate the game like appearance and game references will love it. The editing is superb  and gives the film a completely original feel.  Scott Pilgrim Vs The World? It certainly won’t be after seeing this film…