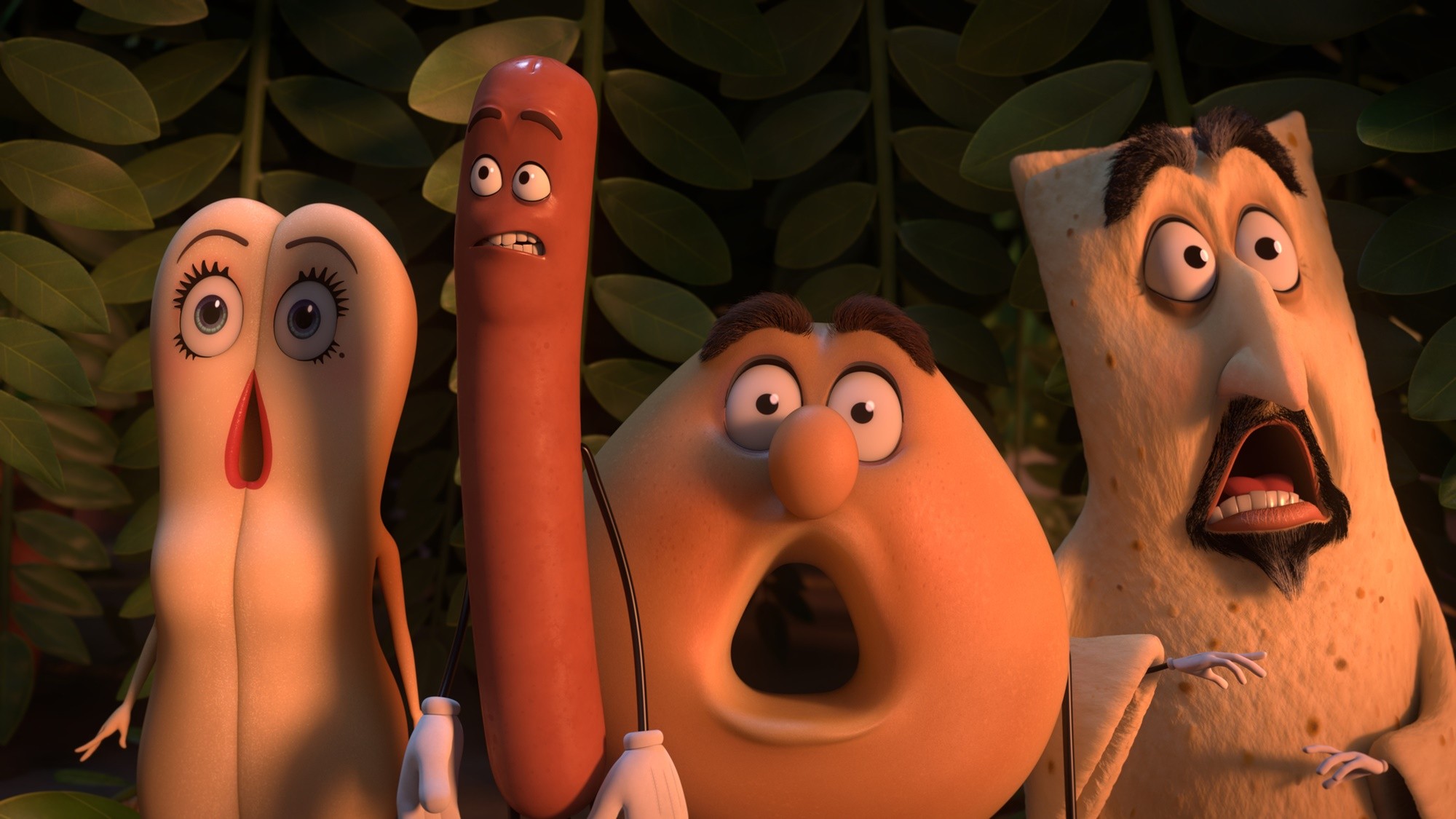 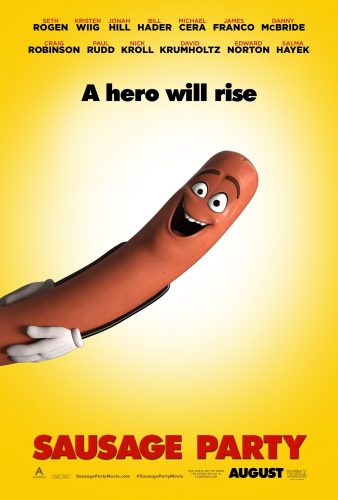 I feel like, by today’s standards, there is very little that can truly offend me or anyone else for that matter. Whether it is our culture that has desensitized us to the point of indifference when it comes to matters once kept to the privacy of people’s homes or the fact we’d like to think we’re more progressive for not being ashamed of the natural things humans do-there is an argument for either side. The point is that whether you are blasé or still blush when it comes to talking about sex in public the consensus, at least at this point in my life which naturally dictates my group of friends and peers being of similar mindsets, is more or less that we need to get over ourselves and stop making such a big deal over what everyone has. We should be more like the Europeans. A penis is a penis and in Sausage Party a sausage may as well be a penis. If one falls into the camp of shying away from such conversations and believe that a certain amount of mystery should still exist between people then you’ll likely want to shy away from this new Seth Rogen production as well. Taking the premise from any number of children’s movies (The Brave Little Toaster, Toy Story, Secret Life of Pets) where when the humans ago away the inanimate objects come out to play Rogen and writing partner Evan Goldberg have ran with that idea, but this time with food, which of course comes to meet a terrifying end-yes, more terrifying even than Sid. It’s a premise ripe for parody and a genuinely funny idea if what you’re aiming for is a twisted, dark tale that not only tells the story of what it might be like if food were living, breathing beings, but per usual also includes some musings on life and what it all means. It’s grocery shopping with shades of existential analysis. Of course, that all seems a little silly when talking about a movie that has a talking douche as the main baddie, but alas-that is where we are today. Some may scoff, some may simply laugh it off, but such minds and twisted ideas have always been present in society-they just likely haven’t been able to reach as large a platform as Sausage Party has and thus the discussion around every new generation’s looser morals and lack of respect for what was once holy only grows louder. Sausage Party isn’t wholly indicative of society today though, it’s simply indicative of one aspect of society and ends up essentially being a discussion about how that society can co-exist peacefully whether one believes in keeping certain aspects and ideologies private or not.

Fair warning: As this next paragraph will attempt to give a quick summary of both the plot and story of Sausage Party it will inevitably sound insanely ridiculous and probably even a little dumb. There is no way around this, but somehow it works-for the most part. Trust me. We are dropped into the opening hours of what is a grocery store called Shopwell’s that is clearly part of a large chain on what seems to be the eve of July 4th. The hot dogs and hot dog buns refer to it as, “red, white, and blue day” and get excited over the celebration because they know their chances of being bought are greater. Why do these food products want to be purchased when that only ensures they’re one step closer to their inevitable death, you ask? Well, this is due to the fact that a few nonperishable items who have obviously been around for a while made up a fantasy some time ago to convince the food in the grocery store that the humans who come in and shop are Gods and that to be purchased was to be chosen. Chosen for what? To go to “The Great Beyond” where everything will be peachy (pun intended), but most importantly they (the food) will finally be able to get it on with one another without the Gods disapproving. This is of the utmost importance to Frank (Rogen), a hot dog, who only hopes he is purchased with the same package his bun of a girlfriend Brenda (Kristen Wiig) is so that they may finally, you know, come together. In something of a surprising and refreshing twist Sausage Party doesn’t play out as one might expect based on the trailers. The plot covers more ground as an adventure story through the grocery store with Frank meeting different products and coming to gain a greater perspective of the world around him as he meets different food from different places of origin and aisles. I expected little more than for our group of hot dogs, which also includes the somewhat obnoxious Carl (Jonah Hill) and the slightly deformed Barry (Michael Cera), to be purchased as the inciting incident and then fight to find their way back home to their respective buns, but instead directors Greg Tiernan (Thomas & Friends) and Conrad Vernon (Shrek 2) weave Rogen and Goldberg’s three separate narratives into a fast-paced and consistently hilarious piece of social satire and commentary.

So yeah, Sausage Party is basically a big excuse for Rogen and his buddies to march out their ideas on religion, race, economic class, sexual preference, relationships, and whatever else they may feel they’d like to discuss under the guise of animation, but it mainly feels like we’re talking religion here. Rogen himself is Jewish as are the majority of the troupe of actors in Judd Apatow’s standard bunch. Rogen has always seemed to have something of an issue with Christianity and those who follow blindly. Like the summary for Sausage Party, trying to describe faith in the core concepts and values of Christianity could easily sound a little crazy and ridiculous, but that’s the point they’re trying to get at. Fair enough. This isn’t anything new though, for as long as there have been Christians there have been those who have criticized organized religion. The thing withSausage Party is that it’s not so much criticizing or slamming the exact beliefs of certain groups of people, but rather criticizing how such people can use those beliefs to craft the world around their own needs and wants. Granted, if you believe in something it will undoubtedly feed into and shape the person you are-what else is there? Still, despite the fact Sausage Partydoes its best to offend and criticize any religious group, demographic, race or culture it is sneakily suggesting the larger idea that these outright offensive things being doled out in front of us in the form of food are actually the very things that keep us apart when the main idea of most beliefs is for love and hope to come above everything else. Without love there is nothing else. Fortunately, Sausage Party doesn’t allow itself to get this sappy, but it eventually becomes aware that its agenda is somewhat overwhelming and its intent insanely obvious to the point it understands it can’t expect an audience who it couldn’t have not offended in some way to be totally okay with those insults. And so, by rectifying not only its own disregard for anyone else’s beliefs it also does its own course correction in eventually halting the insults and instead searching for hope and connections no matter what the stereotypes tell us. That this hope is displayed through one of the most graphically disturbing, relentlessly raunchy, and outright shocking things I’ve ever seen on a movie screen only makes the film that much more endearing as it’s willing to be so daring.

It isn’t all in the theological thought and subtext that Sausage Party is surprising though, but just as much so in the quality of the animation, the original music, and in the creativity of the piece in general. With Rogen bringing in seasoned animation directors to guide this ship the film looks like and has the scope of something that might be distributed by the likes of DreamWorks or Illumination (sorry boys, still not touching Pixar or Disney). Within that animation are flourishes of great details and ideas that won’t get the recognition they deserve, but are exceptional in that they exist to be discovered on repeat viewings (if you’re brave enough to venture through this world again). Small throwaway lines such as, “I’m still fresh!” coming from a relieved Brenda after breaking out of her packaging for the first time or the sheer audacity of having Craig Robinson so shamelessly play a box of grits while talking about how much he hates the crackers is, while obvious, executed so well it’s laugh out loud funny in that it was too good of a joke NOT to make. There are countless moments such as this capitalizing on ethnic and racial stereotypes in our own world that determine how the different types of foods treat one another as well. David Krumholtz’s Lavash and Edward Norton’s Sammy the Bagel provide ample opportunity for such comedy. Beyond this, Alan Menken was somehow roped into composing original songs for the film giving way to a Disney-style musical number on which the entire premise hinges and in true Sausage Party fashion is darkly spectacular. The biggest concern going into a movie like Sausage Party though, is that there will be little more to it than the idea that spawned the original premise. That the writers and creators wouldn’t know where to go with the premise once they had all the exposition in place, but Sausage Party certainly knows what it wants to be and goes further past its main idea to the point it tests out a thesis of how far a movie can go if coated in a facade that typically connects with children? Would such a disguise make the blow of their contention with faith easier to swallow? Maybe, but more important is this was designed to be a dirty and offensive comedy and in that regard it succeeds time and time again. Whether you agree with what the movie is arguing or not odds are you’ll be laughing.

Hunt For The Wilderpeople