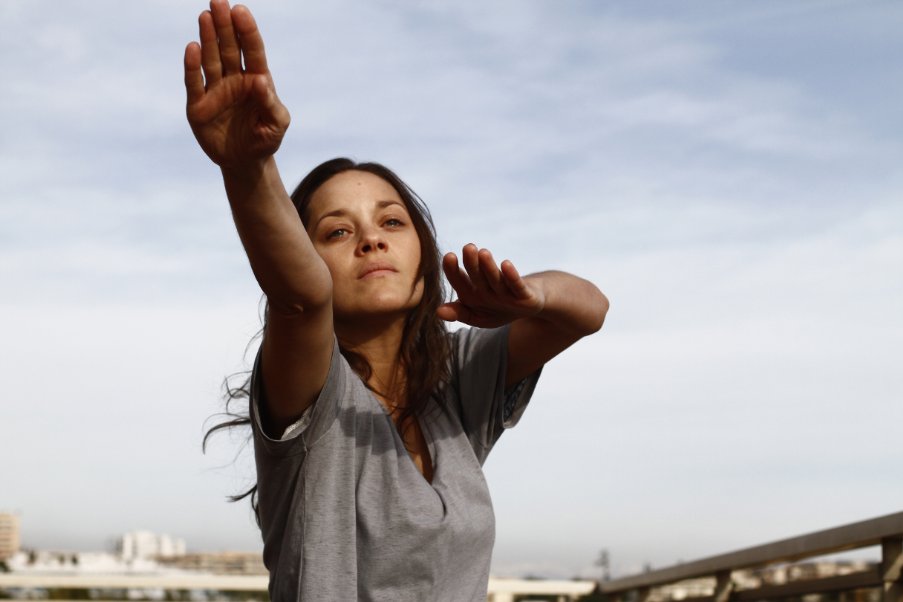 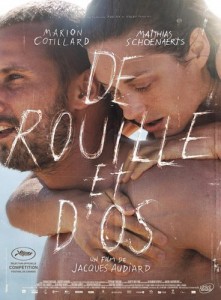 French director Jacques Audiard in recent years, has made great strides in becoming one of the leading lights of cinema in his homeland. Hot off the heels of his compelling and gritty prison drama ‘A Prophet’, he returns with an expression of his more sensitive side complete with another pain fueled story of ‘confinement’ spiked with tender romance. Albeit this time, the former occurs through the events of a somewhat unfortunate nature..

At first glance, the premise for Rust And Bone would be likely perceived to be too ‘offbeat’ for the conventionalists among us. The opening exchanges revolve around the misfortunes of Ali played by Matthias Schoenaerts. Daring to imply he’s ‘saddled’ with a five year old son whom he struggles to fully bond with, Ali is forced to adapt to the surroundings of his estranged sister’s (Corinne Masiero) garage. With previous excursions including kickboxing, his impressive frame is soon put to effective use working as a security guard at a bog standard nightclub.

A minor scuffle later and he is greeted with the presence of Stephanie played by La Vie En Rose’s Marion Cotillard. A whale trainer by trade, their brief first encounter doesn’t remotely elude to the horror that ensues. A routine day at the theme park aquarium leaves our female lead disfigured and devoid of the drive that used to channel through her. Desperately seeking an ideal form of ‘healing’ many weeks down the line, she contacts Ali out of the blue. Cue an unlikely but steadily paced relationship as they both attempt to combat their own emotional and physical defecencies, whilst providing much needed solace to each other.

Refusing to cave into the Hollywood stylistics when it comes to sentiment, Audiard’s handling of the story is wonderfully restrained. The questionable musical choices which include Katy Perry’s Firework and B52’s Love Shack on the surface could be delicate stabs at many a mainstream romantic montage, but are consistently put to inspired use. Audiard’s intimate directorial style makes for some stunning imagery whilst heightening the impact of already affecting sequences, in particular Ali’s bare knuckle scraps and a gorgeous synchronised mid-shot with Cotillard and a beloved creature of the sea.

The two central performances are nothing short of staggering with Audiard expertly providing parallels between Cotillard and Schoenaert’s fractured protagonists. Cotillard brings gravitas to her devastating and vulnerable turn as the disfigured Stephanie. Thoroughly convincing as a result, her condition provides the perfect ‘metaphor’ for Schoenaert’s own underlying disabilities. Whether it’s his almost misogynistic approach to relationships and his handling of women or his lack of remorse and maturity when dealing with his son, his portrayal of Ali whilst initially hard to root for simmers with animalistic intensity.

The narrative structure of ‘Rust’ much like the characters it depicts, is not without its imperfections. Certain plot threads feel unnecessary, (swerve involving Ali’s sister a key gripe) threatening to bloat the film. In addition, with Audiard clearly desperate to deliver a killer emotional crescendo of sorts, the finale whilst deeply moving feels rather drawn out and ill-fitting of it’s underplayed whole.

Nonetheless, Rust and Bone is an enthralling slice of cinema which alternates between bruising and achingly beautiful with ease.