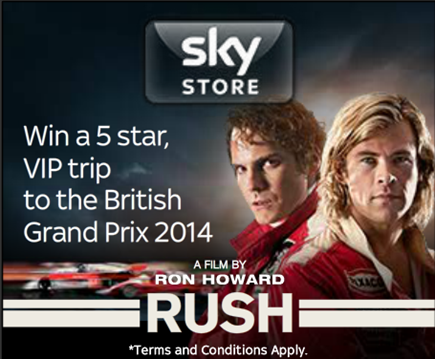 To celebrate the release of Ron Howard’s Formula 1 film ‘Rush’ on Sky Store, Sky are offering an all-expenses-paid trip to Silverstone, and are throwing in exclusive pit lane access!

In a genre heavily populated by the cocksure machismo-fueled glitz of American football and the fists of fury that have often come flying out of the red and blue corners of a boxing ring, Formula One in comparison has been predominantly stuck, at the back of the sports drama ‘grid’. Working its way up the rankings with the critically acclaimed ‘Senna’, seasoned directorial veteran Ron Howard (A Beautiful Mind/Apollo 13) aims for the top once more after his own downturn in form, with this revved up biopic of a classic rivalry.

Sending us back to the 1970’s and parading around the less glamorous world of Formula 3, the blonde wavy locks of serial womaniser James Hunt (Chris Hemsworth) complete with his awfully well-spoken backers, are steadily growing credibility in a fiercely contested ‘arena’. Across Europe to Austria, Niki Lauda (Daniel Bruhl) craves the adrenaline rush that subverts the expectations of his deep-pocketed father and is willing to gamble hefty amounts to realise the dream.

Such struggles inevitably setting the stage for the narrative crux of the film, as the zingy pot shots thrown in the early infancy of their careers, manifest into an intense battle for glory during the Grand Prix season of 1976. A reluctant agreement propelling Hunt into the world of Mclaren as Lauda’s mechanical smarts win over Ferrari, their respective partners Suzy Miller (Olivia Wilde) and Marlene Knaus (Alexandra Maria Lara) can only look on anxiously as they show little remorse in pushing each other to their physical and mental limits.

‘Rush’ will undoubtedly be judged by the die-hards on the realisation of its world. Director Howard here has achieved it impeccably, with his frenetic but assured direction particularly during thrillingly staged sequences of its ‘core element’ and his effective use of real footage, perfectly complimenting the lifestyles of its protagonists and the machinery at work. Far from alienating the uninitiated, the film ultimately thrives on the compelling human drama simmering underneath all the bravado, as Howard shifts through the narrative ‘gears’ with pin-point precision.

Often proving easy for an audience to be driven to take a side in such fare, ‘Rush’ is refreshingly flawed in how it portrays its characters with a need for speed and a thirst quenched only by winning. Hemsworth once again oozes charisma in abundance as Hunt and proves deft in capturing the reckless nature that drove him professionally, yet left him hitting the skids personally. Arguably symmetrical of his own career, Daniel Bruhl breaks into the mainstream with an outstanding, emotionally fractured turn as Niki Lauda, whom had little interest in conforming to the stereotypes that dominated the sport.

Riveting in neutral, utterly compelling with its foot fully on the pedal, ‘Rush’ is an exhilarating cinematic experience that deserves to be in contention for the ‘podium spots’.

WIN! Lord Of The Rings T-Shirt!