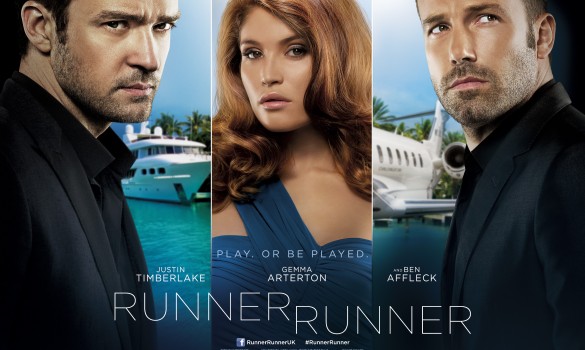 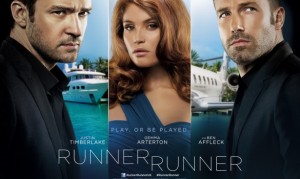 On the surface it’s perfectly reasonable to harbour modest expectations concerning “Runner Runner”. Twentieth Century Fox have been doing a solid job promoting it for some months; it stars several Hollywood A-listers and comes from the director of 2011’s capable “The Lincoln Lawyer”. However anybody with more than a few years of Multiplex habit under their belts will know one should always be wary of a “big” film getting an early autumnal release. The popcorn season has all but faded with the passing of August, yet the higher calibre awards fare and Holiday blockbusters still haven’t come into passing, frequently leaving the September/October window as a less flattering portion of the cinematic calendar. “Runner Runner” is pretty typical then, a vapid thriller with severe scripting issues and a crippling lack of humanity. It begins with purpose and efficiency, but Brad Furman’s movie encounters all sorts of issues on route to its conclusion. Namely that it doesn’t really have a conclusion.

Unable to pay his tuition, Princeton student Richie (Justin Timberlake) risks his entire savings on gambling website Midnight Black, only to have both his funds and hope zapped. On closer inspection Richie begins to suspect he’s been swindled, hopping on a plane to Costa Rica to confront the company’s wealthy owner Ivan Block (Ben Affleck). Block responds to Richie’s tenacity, refunding the kid his money and offering him a major job opportunity in paradise. Richie enjoys his newfound responsibilities and monetary comfort, forming a relationship with Block’s personal assistant Rebecca (Gemma Arterton) along the way. However as time passes, Richie’s role within the company becomes increasingly dangerous and suspect, with added pressure provided by a manic FBI agent (Anthony Mackie) desperate to have Richie help nail Block for international fraud and theft. When Richie confronts Block the internet mogul becomes increasingly hostile, leaving the student’s well-being tottering on a precarious line.

Furman shoots “Runner Runner” with a slick MTV coat, never looking more directorially at home than during the various party scenes spaced throughout the feature. The picture has an almost fetishistic obsession with gloss; ogling its attractive cast and letting ear-shredding techno music dominate the soundscape. This expensive yet hollow aesthetic might have been excusable had it come complete with an innovative point or compelling story, but alas “Runner Runner” provides none these things, instead revelling in lusty, hedonistic nothingness. It’s professionally assembled in the fashion of a music video; gregarious energy and the celebration of appearance are treated like artistic necessities, whilst storytelling and film-making proficiency take a firm and neglectful backseat.

The screenplay is hopeless; maybe one of 2013’s least convincing. It begins clinically and gets the ball rolling with terrific purpose (we’re in Cost Rica very promptly) but it fumbles brutally from there onwards. Characters aren’t fleshed out, dicey gambling metaphors are erratically tossed around and the story itself is a hodgepodge of about twenty better mentor vs. protégé tales, with all the expected turns of personality and revelations you’d expect. Of course Affleck’s character isn’t a nice guy and you can bet Timberlake goes from enamoured to disillusioned in the space of about ten minutes; with Arterton’s love interest left conflicted by the two men at her side. “Runner Runner” is incredibly familiar and generic, but what’s more it’s sloppily assembled. There are an abundance of faceless characters and worthless subplots (several of which don’t properly pay-off) and the final twenty minutes are devastatingly muddled. Lots of things appear to happen, but very little of it is executed with coherency or tension; leaving me to suspect some hefty, potentially studio enforced cutting went underway in Post. The third act doesn’t feel like a legitimate ending, it’s just a flabby extension of the middle portion with an unearned finish that wraps everything up courtesy of slack writing. There’s a lack of structural imprint here, one that leaves “Runner Runner” imbalanced and its audience confused and unfulfilled.

Despite its immature sheen, I did welcome the movie’s edgier sensibility; it certainly earns its R-rating thanks to several bursts of searing nastiness. One sequence involving the threat of hungry reptiles is arrestingly executed, thanks in large part to Affleck’s intimidating turn. The future Batman is on good form here and controls his predictable character arc well, exploding with believable force when the screenplay demands it, but generally underplaying things with a cool demeanour and treacherous eyes. There are moments of friction in “Runner Runner” that provide some trashy mirth and a lot of it has to do with what Affleck brings to the table. Anthony Mackie is equally vibrant and bombastic, but the rest of the thespian troops are comatose. Timberlake coasts unexceptionally in the lead, forming no chemistry with a sexy yet sedate Arterton as the pair struggle against Block’s immoral business plan. Ultimately “Runner Runner” requires us to sympathise with lifeless characters and their own personal woes (Richie’s father is clumsily ingratiated into proceedings), which is probably why the final bursts of competent but unimaginative action fail to raise the pulse.

“The Lincoln Lawyer” was by no means a sophisticated or important work, but it had a sweaty atmosphere, a strong leading man and a narrative that evolved with suspense and delicacy. “Runner Runner” lacks all of these things, dooming itself as a result. Furman’s sophomore picture has roughly about the same ambition as his theatrical debut, but this time the film-maker acquits himself inadequately, struggling to make either his hollow shell or the ramshackle story he’s been paid to develop pop with any real integrity or interest. It’s an unfortunate failure, one unlikely to capture the attention of even gambling addicts. But hey, that’s late September releasing for you.