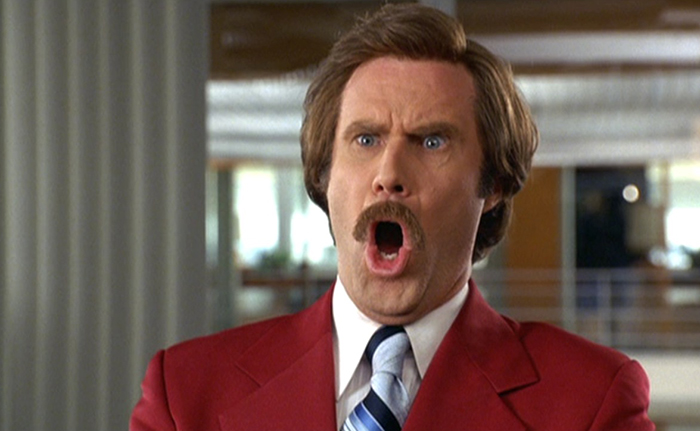 Ron Burgundy, Adam McKay and Will Ferrell’s wildly-successful comedy creation from the Anchorman films (you may have heard of him, he’s kind of a big deal), is due to get his very own podcast on iHeartRadio in early 2019.

The series, which will be co-produced by internet jokesters Funny Or Die, will launch a 12-episode initial season in the first quarter of next year. A second season of The Ron Burgundy Podcast is due in mid-2019.

“Listen, I don’t know what a podcast is, but I currently have a lot of time on my hands and a lot to talk about,” said Burgundy, in a statement, “I am also broke. Therefore, I am very excited to do this podcast. It is literally saving my life.”

“To be honest, we don’t want to do this podcast and we just want to get this announcement over with as soon as possible,” The president of the iHeartPodcast Network, Conal Byrne, said in his own press release, “Ron quite literally forced us into making this podcast with him, first calling us more than one hundred times in a single day and then proceeding to actually show up at our doorstep and physically force himself into our studios. We do hope the podcast is well-received, but in the meantime, we hope by agreeing to do the announcement he will stay away.”

The company are clearly all-in on the character’s particularly anarchic and wry sense of humour, though it is presently unconfirmed whether or not Ferrell will be reprising his role as Burgundy for the podcast (though it’s hard to see there being a point, if he doesn’t).

A trailer for The Ron Burgundy Podcast is expected within the next couple of months. Will Ferrell can next be seen opposite his Step Brothers comedy partner John C. Reilly in their tongue-in-cheek retelling of the classic Sir Arthur Conan Doyle stories, Holmes & Watson, due out on the 26th of December.

Kevin Hart Will Host The 2019 Oscars