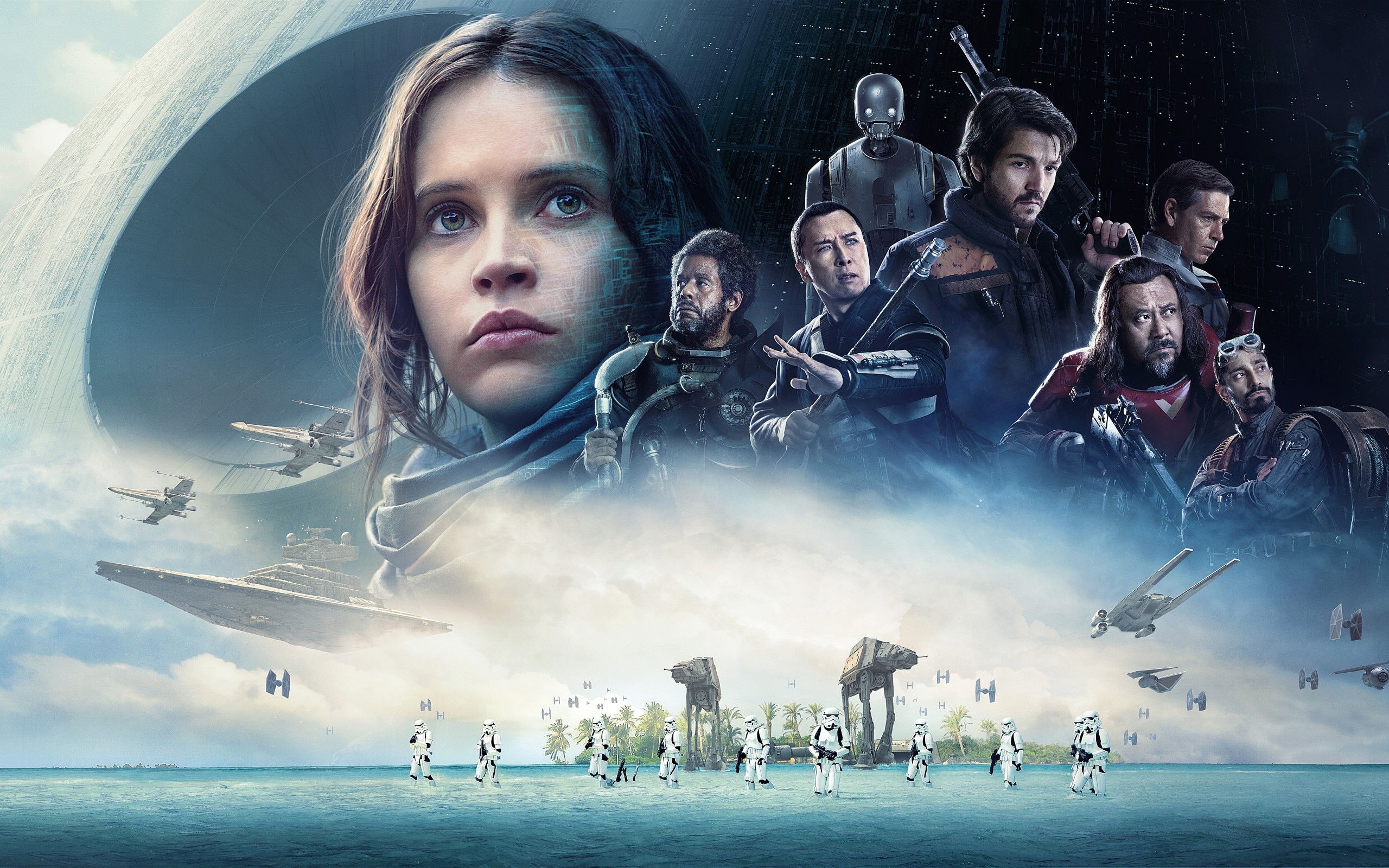 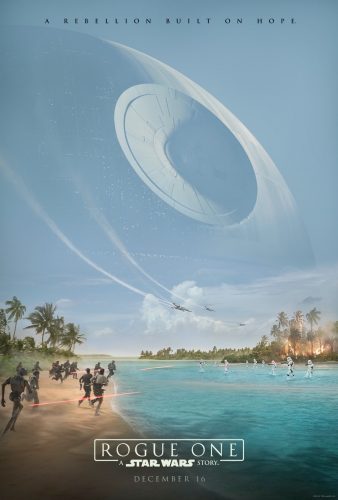 While the expectations heaped upon The Force Awakens seemed massive, it was always going to be a safe bet with the strong power of nostalgia and the returning cast from the classic saga, Rogue One arguably has the greater challenge, the first Star Wars spin off set away from the main series, it absolutely has to succeed.

Luckily, or perhaps luck has nothing to do with it, as Disney are trusting the Force, making Rogue One more than just a spin off, it is a success in its own right.
And the early signs weren’t great. Rumours of behind the scenes concerns, confirmation of extensive re-shoots done by another director, trailers that felt totally jarring from one to the next. For the most part this isn’t noticeable but every now and again, you can’t help but see how the film doesn’t fit so will together in certain places. Scenes from the trailers are missing, and while this alone isn’t uncommon, it does lead you to wonder what might have been different before the re-shoots. But cinema is full of these stories, we have to accept the final product in this case, not what might have been.

If Rogue One has any glaring issues, they’re all in the set up, with the first hour being perfectly serviceable and interesting but definitely lacking in something. But when it truly gets going, when the action hits the tropical planet of Scarif, both on the beaches and high above in orbit, Rogue One accelerates and becomes dynamic, dark and a thundering success.

Packed full of memorable characters and imagery that will become as iconic as anything else in the Star Wars universe. Gareth Edwards has made a beautiful film, that might in that respect beat the film that preceded it, The Force Awakens. The vistas are gorgeous, the locations feel real and lived in, steeped in lore.

We’ve never really seen the galaxy under Imperial rule, and now we get to see it, new worlds and locations (most of which are identified via text onscreen in a weird stylistic choice I really didn’t care for) that exist under tyranny. It also explores the Rebel Alliance and reveals a darker side to the heroes who intend the liberate the galaxy.

The plot to steal the Death Star plans hits many expected beats but it also zooms off in unexpected directions and gives us a final act that thrills and frightens, as we begin to ponder the fate of our new heroes.
Intense action scenes, some of the very best thus franchise has offered up, are stocked full of danger because we genuinely don’t know who, if anyone, will make it out alive.

Space battles and ground battles, firefights large and small and personal, pepper the film with great action, well orchestrated and put together.
Much will be made, and said, of certain special effects used in the film, they warranty further discussion and while these aren’t perfect, it does give us pause for the future of effects and how they can be used. If that sounds vague, I’m trying to be.

As the trailers have already told us, Darth Vader is featured in Rogue One, he is used sparingly, just a couple of scenes, but this is a side to Vader we have never really seen before, brutal and scarier than we’ve ever imagined. He’s not the only returning character but you’ll have to see the film for the yourself for those reveals.
Rogue One has given me a new favourite scene featuring Vader and I wasn’t expecting that, more than that, after his deconstruction in the prequel trilogy, it made him once more the terrifying villain I remember from childhood.
While Vader is an unqualified success, less so is the primary villain Ben Mendelsohn’s Orson Krennic, nothing wrong with the actor’s performance, the character is thinly drawn. He gets to sneer and be generally unpleasant but he doesn’t really have much back story or motivation, beyond trying to impress Vader and the Emperor. 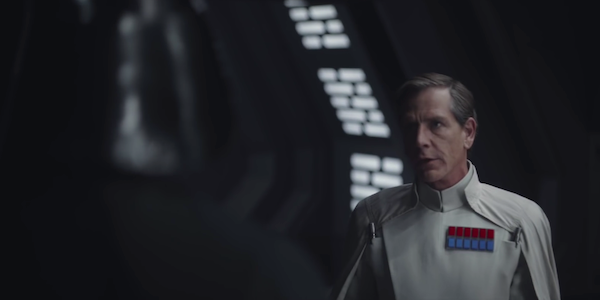 As for our heroes, they’re an interesting bunch, much of the film hangs on the performance of Felicity Jones, and I admit to not being her biggest fan, she has very much won me over with her performance. Jyn starts off as a touch unlikable, but she soon softens to her new rebel friends, and the film is much better for it, with Jones bringing both strength and weakness to Jyn. Diego Luna is our entrance to the rebellion as Cassian Andor (a fantastic Star Wars character name by the way) and he is the only other character who gets much going on, the rest, Donnie Yen, Wen Jiang and Riz Ahmed have smaller parts but still important and interesting in their own right. Alan Tudyk gives a great vocal performance as the somewhat comedic relief droid K-2S0 and he will absolutely become a fan favourite and rightly so.

The likes of Forest Whitaker and Mads Mikkelsen aren’t given enough to do, largely stuffed with exposition, Mikkelsen at least gets a few decent emotional beats as Jyn’s father. Galen, the man who created the Death Star.

An interesting additional curiosity that Rogue One leaves you with, it makes you see A New Hope differently, not in a bad way, just that it extends the story in new ways, layering the conflict and motivations, it’s a rare film where you can go home and immediately put on the next installment. 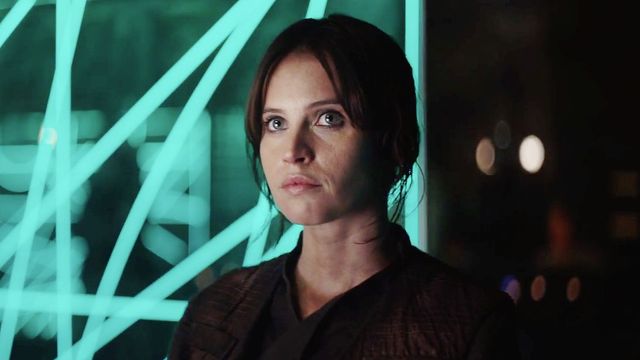 Rogue One is a more important film than you realise, it’s a story you wonder that might not need telling, but as the film progresses and the implications become apparent, the love and effort put into it, makes it worthy of everyone’s attention.

Is it better than The Force Awakens? That’s a harder question to answer than I was anticipating, but Rogue One is absolutely a darker film that grabs your attention at a certain point and refuses to let go, even though you know the outcome, or at least think you do, it is impossible to not be on the very edge of your seat.

Disney spent a huge amount of money for Star Wars, and as with Marvel, it is proving a wise investment, not just for Disney, but for the fans. We’re the real winners here.

And for their next trick, Episode VIII looms large on the horizon with all the questions we need answered, and after that comes the Han Solo spin off which is a big gamble, but for now, we have Rogue One and it is absolutely worth another trip to that familiar galaxy, far, far away…

Rogue One: A Star Wars Story is in cinemas now!